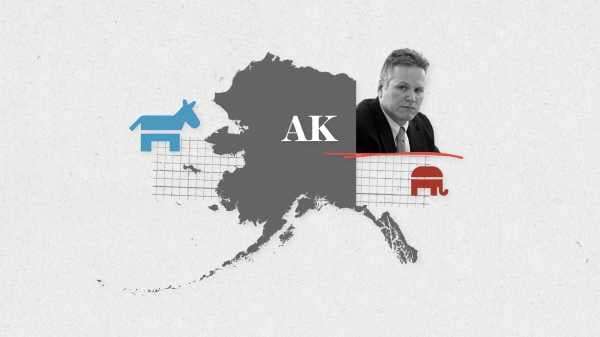 One state defies any easy red wave or blue wave characterization in the 2018 elections: Alaska, big, remote, and the home to the midterms’ most interesting governor’s race.

Tuesday’s primary elections are mostly a formality, though there is a large GOP field. For now, the general election in November is shaping up to be a three-man race: incumbent independent Gov. Bill Walker, former US senator and presumed Democratic nominee Mark Begich, and Republican primary frontrunner state Sen. Mike Dunleavy.

The fear for the Democratic forces in the state is that Walker, who expanded Medicaid and positions himself as a practical centrist, and Begich, who has criticized the current government for cutting into the state’s unique economic welfare program, will split votes and create an opening for Dunleavy to win the governor’s house.

The Begich and Walker camps could cut a deal to avoid that scenario. Possible solutions include one candidate dropping out and endorsing the other or some kind of unity ticket. They have until September 4, when ballots start to get printed, to act. It’s a situation with some precedent in this state whose politics defy easy categorization.

The Alaska Permanent Fund, and its current crisis, explained

Walker did enjoy some popularity early in his term, after expanding Medicaid, but it appears the state of the state government has soured voters on him. Morning Consult has his approval rating at 29 percent and his disapproval at 54 percent, the fifth most unpopular governor in the country.

A drop in oil prices has created something of an economic crisis in the state. Alaska is very dependent on oil — and oil prices have been falling and the state’s revenue with it. Alaska is currently looking at several billion dollars in annual budget deficits with no end in sight. The options are tax hikes or spending cuts.

The oil crisis has also hurt the permanent fund that pays dividends to every Alaskan, the closest the United States has to a universal basic income. The fund is funded by oil money, and the dividends have shrunk nearly by half — from $2,100 to $1,100 — over the past few years, as Vox’s Dylan Matthews reported.

Walker is selling himself as the pragmatist making hard financial decisions. He and the state legislature have dipped into the permanent fund to help stave off a financial crisis. But Begich’s campaign argues that eating into the permanent fund and reducing checks to Alaskans is effectively a tax hike on poor people who depend on that money for their basic economic security.

The other big issue in the campaign is a surge in property crime, which is linked to the opioid crisis: Alaska ranks toward the top on drug overdose deaths. Vehicle thefts, in particular, rose to twice the 10-year average in 2017. Both Begich and Dunleavy focus on crime in their critiques of the Walker administration.

The political quagmire of the Alaska governor’s race

All this has brought Walker to a point where he’s being challenged by both parties. Begich, who is running unopposed in Tuesday’s primary, is a former Democratic senator and a son in a state political dynasty. He has been out of politics for the last four years, but the former Anchorage mayor is a familiar face in a state where everybody likes to think that they know each other.

Dunleavy has been in the state legislature since 2013. He’s running on a “Make Alaska Safe Again” platform — explicitly emulating a Trump-like message and promising to cut taxes and cut spending while somehow still leaving the permanent fund untouched. Democrats foresee draconian budget cuts to other programs if the Republican wins.

The candidates are already looking ahead to the general election. There’s a possibility that Begich and Walker could split the center-to-left vote in the state and create an opening for Dunleavy to break through. Two polls, conducted in June, found Dunleavy ahead of Begich and Walker, but with the latter two still taking more than 20 percent of the vote respectively — a classic split vote.

The Walker and Begich campaigns have talked, at least preliminarily, about how to avoid Dunleavy win, Jim Lottsfeldt, a longtime Democratic operative in the state who oversaw a pro-Begich Super PAC in 2014, told me. The presumed options would be one of Walker or Begich dropping out and endorsing the other — or perhaps some kind of unity ticket.

It has happened here before: Walker allied with Democrat Byron Mallott for a unity ticket to win his first election in 2014. Begich endorsed Walker then, while Walker did not return the favor. The senator’s strong ground game may have helped carry Walker to victory that year even as he fell short in his own campaign.

“Walker probably owes his job to Begich, and now they’re running against each other,” Lottsfeldt told me.

After Tuesday’s primary elections, the two sides will have about a week before the general election ballot is finalized.

A deal may not materialize. Even if it doesn’t, it’s possible Walker will fade given his deep unpopularity and Begich’s strong profile helps him beat Dunleavy on his own. True three-way elections are notoriously difficult to predict. The Cook Political Report rates the Alaska governor’s race a toss-up.