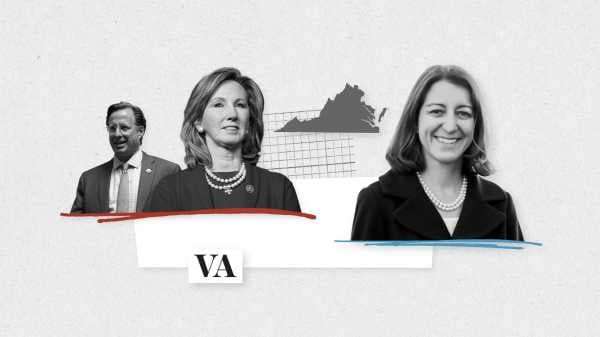 The candidates for crucial 2018 House races will be picked in primary elections Tuesday in Virginia. The state’s polls close at 7 pm Eastern. Live results are below.

Elaine Luria is a former US Navy commander who now runs an art studio. She has earned the Democratic Congressional Campaign Committee’s Red to Blue imprimatur, which means the national party thinks she’s shown she can be a credible candidate. She also has the endorsements of Emily’s List and End Citizens United.

On Tuesday, her only challenger is Karen Mallard, a schoolteacher who says that President Trump’s nomination of Education Secretary Betsy DeVos inspired her to enter the race.

Abigail Spanberger is considered the favorite. She’s a former federal law enforcement officer and CIA operative and has amassed support from a lot of local leaders. She is facing Dan Ward, a retired military colonel. It’s worth noting that in Democratic primaries where the top choices are a man and a woman, women have been winning a lot.

Incumbent Rep. Dave Brat is waiting in the general election. He is a former college professor who famously ousted then-House Majority Leader Eric Cantor from the right in 2014. He’s one of the most conservative members of the House, but his district is changing. Trump won by 6 points here after Mitt Romney won by 11 in 2012. It swung 8 points toward Democrats in the governor’s race last year. There are a lot of younger, more affluent, and better-educated voters in the district, which covers parts of the Richmond suburbs.

Incumbent Rep. Barbara Comstock, first elected in 2014 and long pegged as one of 2018’s most vulnerable Republicans. A former Bush administration official, Comstock voted against Obamacare repeal but for the tax bill. It’s the latter that could land her in trouble, since the individual mandate repeal is being cited by insurers as a big reason for coming premium hikes for 2019. She does have a primary challenger: Shak Hill, a former Air Force officer and ex-Senate candidate running to her right.

State Sen. Jennifer Wexton is probably the frontrunner: She has name identification on her side, and she’s well-liked by many different factions. She can also run on Virginia expanding Medicaid. But she has some legitimate challengers: Alison Kiehl Friedman worked at the State Department under President Obama, Lindsey Davis Stover worked at the VA under Obama and on Capitol Hill, and Dan Helmer is a veteran running the furthest to the left.

The 10th sits near the top of Democratic targets in 2018. Cook pegs it actually D+1, and Clinton beat Trump here in the Washington, DC, suburbs by 10 points(!) in 2016. Everybody thinks this is a toss-up race.