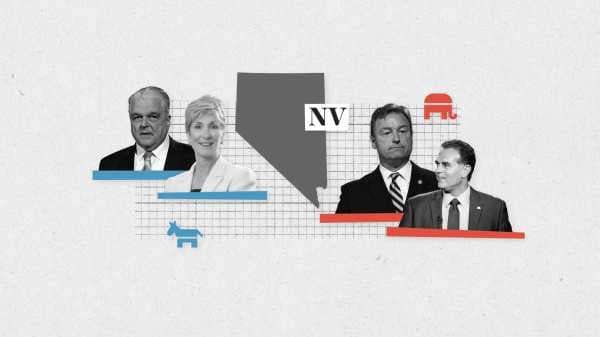 The state is a major battleground for Democrats, who are looking to pick up a Senate seat and end Republicans’ two-decade stronghold on the governor’s mansion. Democrats are hopeful because Hillary Clinton won Nevada in 2016 and President Donald Trump is underwater in the state. Nevada Democrats also have one big advantage: They have about 60,000 more registered voters than Republicans.

But Democrats will still face some serious contests in the general election. The state’s current Republican Gov. Brian Sandoval, who is term-limited out of office, is still extremely popular, which could prop up a Republican successor. And Democrats will also be defending two hotly contested open congressional seats, in the Third and Fourth Districts.

Vox will have live results below, powered by Decision Desk.

Incumbent Sen. Dean Heller is expected to win the Republican nomination, avoiding what would have been a credible challenge from perennial far-right Nevada candidate Danny Tarkanian. Tarkanian, with President Trump’s encouragement, dropped out of the Senate race to run for Nevada’s Third House District.

Among the Democrats, the clear frontrunner is Rep. Jacky Rosen, a political newcomer, who narrowly won a House race in Nevada’s Third Congressional District against Tarkanian in her first bid for elected office in 2016. Her background is in computer programming and consulting. Rosen has a half-dozen challengers but is far and away the favorite to emerge on Tuesday.

Nevada governor Democratic primary: a tense race to try to end a nearly 20-year lockout from the governor’s mansion

There are six Democrats running in a hotly contested primary for the governor’s race.

Clark County Commissioners Steve Sisolak and Christina Giunchigliani are the favorites among a field of six, with things getting increasingly tense between the two in recent weeks. Ahead of the primary, Sisolak and Giunchigliani have traded barbs over everything from the mass shooting that took place in Las Vegas to a proposed bill that addresses the treatment of sex offenders. Polls give Sisolak — who’s amassed a roughly $6 million war chest — the edge, but the bitterly contested race is still pretty close.

Meanwhile, a whopping seven Republicans are running in the primary.

Nevada governor Republican primary: an anti-immigrant hardliner is running to replace the departing moderate Gov. Brian Sandoval on top of the ticket

Seven Republicans are running in the primary.

State Attorney General Adam Laxalt is expected to come out on top. Laxalt is known for backing the Trump administration’s hardline stance on immigration — signing on to a filing last year that opposed California’s “sanctuary cities” and joining a lawsuit in 2015 that challenged the Obama administration’s expansion of DACA. Laxalt has also secured donations from big-ticket Republican names including Sheldon Adelson and the Freedom Partners Action Fund, a group that’s linked to the Koch brothers. His grandfather, Paul Laxalt, was previously a governor and senator for the state, and his father, Pete Domenici, was a senator for New Mexico.

This is an open race in a Democratic-leaning district that Trump narrowly won in 2016.

Philanthropist Susie Lee leads a field of seven in both endorsements and fundraising. Lee, who has been named to the DCCC’s Red to Blue list, has secured endorsements from current incumbent Jacky Rosen, former Senate Minority Leader Harry Reid, and former Vice President Joe Biden. She previously ran unsuccessfully for Nevada’s Fourth Congressional District in 2016. Entrepreneur Jack Love and IT specialist Michael Weiss are among the others on the ballot.

The most notable candidate and likely frontrunner is Tarkanian, an entrepreneur who was going to run for Senate but changed course after Trump called on him to clear the path for Heller. There are nine contenders including state Sen. Scott Hammond and former television reporter Michelle Mortensen. This is Tarkanian’s second bid for this district; Rosen beat him in 2016.