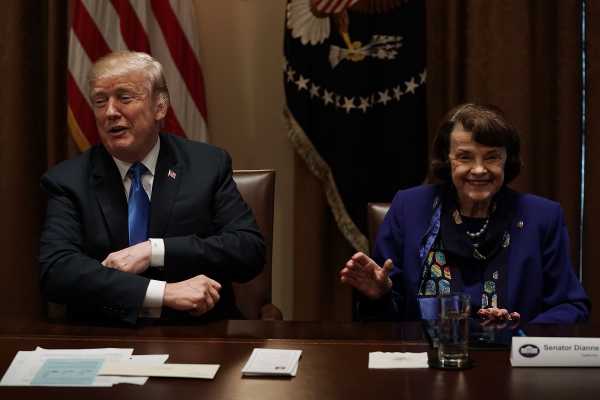 Voters will head to the polls on Tuesday for primary elections in eight states — Alabama, California, Iowa, Mississippi, Montana, New Jersey, New Mexico, and South Dakota — to cast their ballots in a number of consequential contests that could have big implications in November.

Democrats are eyeing states such as California and New Jersey as major opportunities for taking back the House of Representatives, and a pair of new governors — Kay Ivey of Alabama and Kim Reynolds of Iowa — are engaged in their first races to hold on to their spots. Meanwhile, states like South Dakota and New Mexico are picking new governors as their current ones run up against term limits. And voters in Montana will scrutinize the slate of Republican candidates vying to face off against Sen. Jon Tester this fall. It’s sort of like Super Tuesday, but for 2018.

Here’s a quick guide to what’s at stake in every state.

Kay Ivey took over as governor of Alabama in 2017 after Robert Bentley resigned in the wake of a scandal involving an extramarital affair and alleged cover-up by law enforcement. She will face three Republican challengers in her primary and is expected to win, but unless she or another candidate gets a majority of the votes, she’ll have a runoff on July 17. Multiple Democrats are engaged in their own primary to face her or whoever wins the Republican nomination in November.

It’s unlikely any elections in Alabama will be competitive in November or in the primaries, with the exception of, perhaps, the Second Congressional District, currently home to Republican Rep. Martha Roby. As FiveThirtyEight points out, the district’s GOP primary is crowded and competitive, and Roby is facing opposition from two candidates who have aligned themselves significantly with President Trump.

If Democrats want to take back the House in 2018, California is likely to play a major role in how they get there — the party has set out to flip 10 California House seats from Republican to Democrat in November. And Tuesday’s primaries will be an important step along the way, especially as the state’s “top two” primary system and a crowded Democratic field stand to make the path especially complicated.

As Vox’s Tara Golshan writes, there are nine California districts to keep an eye on in Tuesday’s primary for House seats. They include California’s 22nd District, which is currently represented by Republican Rep. Devin Nunes; its 39th District, where a packed field means Democrats risk splitting the vote so much that none of them are on the ballot in November; and its 48th District, represented by Russia-friendly GOP Rep. Dana Rohrabacher.

There’s a wrinkle in the California primary system that could actually make the 2018 blue wave detrimental to Democrats. The state’s top-two primary scheme means Republicans and Democrats run together in the same primary contest and the first- and second-place candidates move on to the general. There are so many Democrats running in some races that they risk splitting the vote so much that Republicans will end up with the first and second spots — and, in some cases, vice versa. In the 49th District, for example, there are four prominent Democrats running and eight Republicans.

The House races aren’t the only ones to keep an eye on in California — there’s a Senate primary too. Democratic Sen. Dianne Feinstein, first elected in 1992, is facing a challenge to her left from state Sen. Kevin de León. If he places second place in Tuesday’s primary, Feinstein will face him in November as well.

A governor’s race and two congressional races are what to watch for in Iowa on Tuesday.

Two Democrats — business owner Fred Hubbell and local labor leader Cathy Glasson — are competing in the Democratic primary to take on incumbent Gov. Kim Reynolds in the fall. A third Democratic candidate, state Sen. Nate Boulton, dropped out of the race after being accused by multiple women of sexual misconduct. Reynolds replaced longtime Gov. Terry Branstad in 2017 when he was appointed US ambassador to China.

Republican Roger Wicker’s Senate seat and all four of the state’s House slots will be on the docket during this primary, though the majority of the races aren’t that competitive. Former business executive Richard Boyanton is challenging Wicker in the Republican primary, while half a dozen candidates have thrown their hats into the ring for the Democrats.

Although Mississippi hasn’t elected a Democratic senator since the 1980s, state Rep. David Baria and venture capitalist Howard Sherman are among the hopefuls aiming to change that tide. (It won’t take place this week, but a special election to fill the state’s other Senate seat, vacated by Thad Cochran and now held by Cindy Hyde-Smith, has also been highlighted as a possible pickup opportunity for Democrats.)

The state’s most competitive House race will likely be in Mississippi’s Third Congressional District, where current Rep. Gregg Harper has said he won’t run for reelection. Six Republicans have lined up for the job in the firmly conservative district.

Incumbent Sen. Jon Tester, known for his trademark buzz cut, is one of 10 Democratic lawmakers in the upper chamber who represents a state that Trump won in 2016. Tester is running uncontested for the Democratic nomination but faces a much larger fight this coming fall, when he’ll have to fend off a Republican challenger.

The Republicans duking it out to take him on include fellow buzz-cut aficionado and Montana state auditor Matt Rosendale. (Rosendale, in a press release for one of his campaign ads, deemed the contest a “Battle of the Flat-Tops” in a nod to their respective hairstyles.) Retired state Judge Russ Fagg, business executive Troy Downing, and state Sen. Albert Olszewski are also running.

Given the potential for Republicans to retake this Senate seat, there’s been a deluge of funding pouring into the race ahead of the Tuesday primary, Vox’s Ella Nilsen reports. GOP candidates and conservative outside groups have infused roughly $5.7 million into the race. Tester, meanwhile, has already accrued $6.2 million in his own campaign chest.

The Democratic Congressional Campaign Committee says it’s eyeing all five Republican-held House seats in 2018, but there are three really worth keeping an eye on: New Jersey’s Second, Seventh, and 11th districts.

The Second District has been represented by Republican Rep. Frank LoBiondo for 24 years, but he’s retiring, and there are multiple Democrats and Republicans running to replace him. Among Democrats, state Sen. Jeff Van Drew appears most poised to win his primary contest, and among the GOP field, a frontrunner is unclear. In the Seventh District, former State Department official Tom Malinowski is the favorite to take on Republican Rep. Leonard Lance in the fall. In the 11th, former Navy pilot and prosecutor Mikie Sherrill is the favorite to win the Democratic primary to in November fight to replace retiring Republican Rep. Rodney Frelinghuysen.

Democratic Sen. Bob Menendez is also running for reelection this year. His primary isn’t expected to be tight, but the general election could be. There are three candidates running in the GOP primary — pharmaceutical executive Bob Hugin, construction company executive Brian Goldberg, and attorney Dana Wefer — and what could make things interesting is that Menendez last year faced trial on corruption charges. He got off, but voters still remember.

Democrats are looking to flip both the governorship and one of the state’s three congressional districts in this fall’s upcoming election.

When it comes to the governorship, Democrats have strong momentum on their side, fueled by constituent outcry about the economy and rising crime rates under current, term-limited Republican Gov. Susana Martinez. Plus, the state tends to lean Democratic, backing Hillary Clinton and Barack Obama in recent presidential elections.

Another big fight is shaping up in New Mexico’s Second District, the only one in the state that’s pretty firmly conservative. Since Pearce, the district’s current representative, is pursuing the governorship, the seat is up for grabs and being targeted by Democrats as part of their efforts to regain the House majority.

Republican heavyweights Rep. Kristi Noem and state Attorney General Marty Jackley are up against one another for the governorship. State Senate Minority Leader Billie Sutton is the lone candidate on the Democratic side.

The competition over the Republican nomination has become fiercer in recent weeks, with a Mason-Dixon poll showing a mere 1-point difference between the two candidates. As a representative for the state, Noem has developed higher name recognition. If she wins, she’ll become the first woman to serve as the state’s governor.

Biden will pause deportations for 100 days