Cork City showed a strong response to losing a two-goal lead as goals from Kieran Sadlier and Graham Cummins earned them victory over Derry City at Turner’s Cross this afternoon.

The league champions – knowing a win would put them back on top of the Premier Division table – were cruising when Karl Sheppard’s second goal put them 2-0 ahead with less than half a minute of the second half gone, however Derry fought back to level as Ronan Curtis and Ronan Hale netted in the space of five minutes to make it 2-2 after 69. 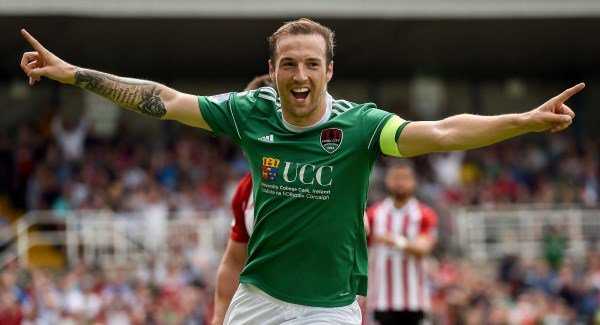 It was a challenge for the Rebel Army to react, but they did that impressively as Sadlier netted a free kick on 72, and the win was secured on 83.

When goalkeeper Mark McNulty’s clearance eluded the Derry defence, Cummins raced on to head past Gerard Doherty and, while the ball came back off the crossbar, the striker netted the rebound.

Cummins had been the architect of the opening goal, crossing for stand-in skipper Sheappard to send a glancing header home on seven minutes and John Caulfield’s side were comfortable for most of the rest of the first half without ever really threatening a second.

The lead was doubled inside 28 seconds of the restart as Sheppard slotted home from Garry Buckley’s through ball, but Derry didn’t give up.

They were back in the game as Portsmouth-bound Curtis fired a low shot past McNulty from outside the area when Rory Patterson flicked on a goal kick and it was to get even better as Jack Doyle’s cross fell for Ronan Hale at the back post, allowing him to fire to the roof of the net.

Cork City could have wavered, but they remained resolute and took the points to return to the summit.