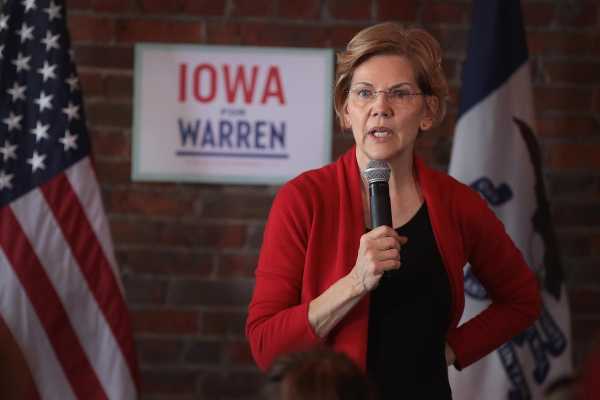 Sen. Elizabeth Warren is coming for Big Tech in a big way: calling for the breakup of Amazon, Google, and Facebook.

The Massachusetts Democrat and 2020 presidential contender laid out an ambitious plan on Friday, March 8, to promote competition and level the playing field for more companies to compete.

Warren’s proposal includes legislation that would make big tech firms “platform utilities” and bar them from owning participants on their platforms — so when you search on Google for restaurants, for example, it wouldn’t be able to prioritize its ratings over Yelp’s. Warren says she would also appoint antitrust regulators that would roll back some of the biggest tech deals in recent years. Amazon would have to give up Whole Foods, for example, and Facebook would have to drop WhatsApp and Instagram.

“I want a government that makes sure everybody — even the biggest and most powerful companies in America — plays by the rules. And I want to make sure that the next generation of great American tech companies can flourish,” Warren wrote in a Medium post announcing the plan. “To do that, we need to stop this generation of big tech companies from throwing around their political power to shape the rules in their favor and throwing around their economic power to snuff out or buy up every potential competitor.”

Warren, a former Harvard professor who came up with the idea for the Consumer Financial Protection Bureau, has long been seen as an enemy of Wall Street and corporations. And in her 2020 bid, she’s staking out a space as a warrior against moneyed interests — she’s introduced legislation to make corporate America more accountable and proposed a wealth tax on the ultra-rich.

Meanwhile, big tech companies have come under increasingly heavy scrutiny in recent years. Facebook has seen a cascade of scandals related to areas such as data privacy and misinformation. The size of Facebook, Google, and Amazon has been a source of growing unease.

Warren’s latest proposal calls for addressing these issues by making it easier for other companies to compete. “This is where we need to go in the antitrust debate,” Marshall Steinbaum, a fellow at the Roosevelt Institute, said.

This also signals that Silicon Valley giants are likely to find themselves in the crosshairs of the political debate as the 2020 election ramps up, whether they want to be there or not.

Warren makes the case for breaking up big tech

Warren lays out a compelling argument that major tech companies are dominating the market and choking off competition. In her Medium post, she notes that nearly half of all e-commerce is through Amazon, and more than two-thirds of internet traffic goes through sites that Facebook or Google own or operate.

She also explains how these companies got to where they are — namely, lax regulators who let anticompetitive deals go through. Facebook, for example, acquired Instagram and WhatsApp. (Facebook also tried and failed to buy Snapchat.) Amazon bought Diapers.com, and Google bought traffic app Waze and ad company DoubleClick. She also lays out how companies use their marketplaces to stifle competition: For example, when you Google something, it prioritizes its own results over those of other website.

And Warren notes that the government has broken up big companies before, including Standard Oil and AT&T.

Basically, Amazon wouldn’t be able to also own any of the brands that show up when you’re searching for something to buy.

“Some companies have so much power in determining who gets access to what in the economy and who is able to prosper and who dies that they cannot be allowed to just exercise that at whim and in their own interest,” Steinbaum, from the Roosevelt Institute, said.

Matt Stoller, a fellow at Open Markets Institute and vocal part of the left, told me that Warren’s proposal was a “very basic, old-school American approach” to competition. “All she’s saying is that Democratic institutions have a role in structuring corporations, not just Wall Street,” he said.

Warren is not the only 2020 contender to take an interest in big tech and competition.

Sen. Amy Klobuchar (D-MN) has a long history of focusing on the tech industry and antitrust issues. She introduced the Honest Ads Act alongside Sen. Mark Warner (D-VA), which would force platforms such as Facebook to disclose the purchaser of an advertisement, in response to Russian meddling in the 2016 election. She is widely viewed as a leader on antitrust and has spearheaded multiple bills that would implement parts of the Democrats’ “Better Deal” platform that would increase scrutiny on mega-mergers.

Warren’s proposal is yet another signal big tech should anticipate more scrutiny, not less, as the 2020 campaign takes off.