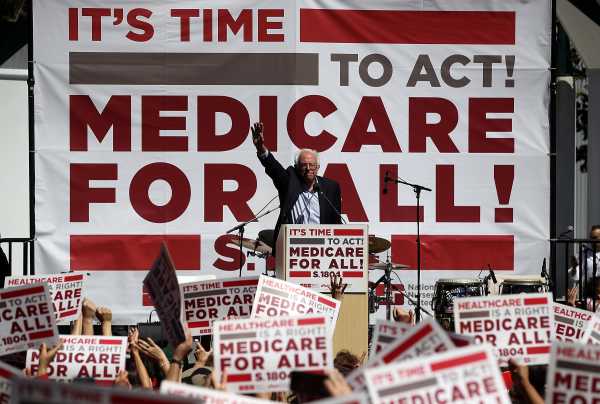 Medicare-for-all has plenty of obstacles standing in its way — the price tag, tax hikes, American aversion to disruptive change — but none might be as intractable as the Senate’s procedural rules.

There is the filibuster, of course, the 60-vote threshold for moving to a final vote on almost all legislation. Democrats aren’t going to have a 60-vote supermajority anytime soon, and Republicans seem unlikely to suddenly convert to the single-payer cause. Democrats could get rid of the filibuster entirely the next time they win a simple majority of 50 and let any bill advance with just 51 votes. But even Sen. Bernie Sanders (I-VT), the godfather of Medicare-for-all, is ambivalent about that.

I’ve spoken with former and current Senate aides, academics who follow congressional procedure, and a former Senate parliamentarian over the past few weeks, and this was the unavoidable conclusion: The rules attached to budget reconciliation would make it nearly impossible to pass the Medicare-for-all bills being proposed by Sanders and Rep. Pramila Jayapal (D-WA). Reconciliation comes with serious fiscal constraints, and the provisions in those single-payer bills that prohibit private insurance and that expand the services covered by Medicare may not be allowed under the rules that govern the process.

That’s not to say Democrats couldn’t do anything to expand Medicare under reconciliation — lowering the eligibility age or even eliminating cost sharing might be permissible — and, to be clear, this verdict is still speculative. Everybody I spoke with cautioned that they would need to see a final text, written to account for the reconciliation process, before they could be more definitive. Even then, the Senate parliamentarian traditionally serves as the final word on these issues, and staffers will argue their cases while a reconciliation bill is being drafted and considered.

But the obstacles set up under the Senate’s budget reconciliation rules for a Medicare-for-all plan are substantial.

Reconciliation was designed to make sure the Senate could more easily pass bills dealing with the federal budget, particularly if Congress wanted to reduce the deficit, without the threat of a filibuster from the minority party. The process begins with a congressional resolution instructing committees in the House and Senate to draw up legislation that saves the federal government a set amount of money. So the special privileges under reconciliation come with conditions.

Some of these conditions are budgetary. The budget resolution that sets up reconciliation will establish a certain amount of money that the government must save or spend, and the final reconciliation bill then has to meet that target by the Congressional Budget Office’s estimates. A bill passed under budget reconciliation is also forbidden from increasing the federal deficit outside that 10-year window.

But the mother of all conditions is known as the Byrd Rule. The rule came about in the 1980s, after West Virginia Sen. Robert Byrd, a Democrat, grew frustrated with reconciliation. His colleagues were using it to advance all sorts of policies, not just those related to spending and revenue. So he introduced his standard for what can be included in a reconciliation bill, which has since been enshrined in federal law.

A bill being considered under reconciliation has to check every box of the six-part Byrd Rule. If it fails any one of those tests, it must be stripped out.

No. 4 is the most difficult for health care bills, which often include all sorts of provisions that aren’t explicitly designed to affect federal spending and revenue. The same would be true for Medicare-for-all.

First things first: Democrats would have to pass a budget resolution to set up reconciliation, and that would require the House and Senate agreeing to spending parameters for their Medicare-for-all plan. Bill Hoagland, a former Senate Budget Committee aide now at the Bipartisan Policy Center, flagged that as one initial hurdle.

The single-payer plan would then have to meet those budget targets once the Congressional Budget Office scores the bill, which is also no easy task. Some Medicare-for-all supporters have suggested phasing in the taxes necessary to fund the program as both more politically palatable and less of a shock to the US economy. But that could risk having a plan that doesn’t raise enough money to satisfy the reconciliation instructions.

Lastly, the Medicare-for-all legislation couldn’t raise the federal deficit after 10 years — a serious ask for a bill that, under the newly released Jayapal version, would provide universal long-term care to a rapidly aging population.

Gimmicks can be applied to get around those budgetary conditions, to be sure. Provisions can expire, dramatic tax hikes can be put off until the 10th year, aggressive administrative savings can be assumed. Republicans, with their tax bill, proved how much you can rig the CBO game if you really try. But policy experts working on Medicare-for-all emphasize that a real financing plan is essential — and Senate procedural experts don’t expect big gimmicks just to get a single-payer plan passed.

“I can’t imagine making Medicare-for-all temporary. Upend the entire health care sector and then say it can return to the way it was in eight years? Nope,” Zach Moller, a former Senate Budget aide now at Third Way, told me. “The alternative could be a huge ‘sunrise’ budget gimmick that the new system is paid for in the long run with some tax that starts showing up in the out years. Huge gimmick, and I don’t expect it.”

What Medicare-for-all also cannot avoid is the Byrd Rule and its restrictions on what provisions can be written into a reconciliation bill, limiting the legislation only to policies that directly affect federal spending and revenue.

Almost everyone I spoke with did think the Medicare eligibility age could be changed under reconciliation. It’s not a surefire win, and there is one worrying precedent from the 1990s when Congress tried to raise the eligibility age. But the general consensus was that a change to the qualifications for Medicare — reducing the age threshold to 0, for example, so every American is eligible — would actually pass muster under reconciliation.

It could also be possible to zero out the cost-sharing requirements for people covered by Medicare. The current Medicare program has substantial out-of-pocket obligations for its beneficiaries. The Sanders and Jayapal bills would virtually eliminate out-of-pocket costs for patients — and that might indeed be allowed under Byrd, Moller says. That’s the good news.

But the bad news is other crucial parts of the single-payer program might run into trouble. Moller singled out Medicare-for-all’s prohibition on private insurance that is duplicative of the government plan as one likely casualty under the Byrd Rule. Hoagland pointed to the expansion of services covered by Medicare as another provision that might violate the rule.

Right now, Medicare provides a patchwork of benefits and leaves out critical services that would be necessary to cover a younger population. Contraception, for example, is not required to be covered by Medicare right now. The Medicare-for-all bills, as currently written, would expand the program to cover almost every medical service. Those expansive benefits are part of the health care utopia that single-payer supporters want to build, by making their plan significantly more generous than any other health care system in the world.

But the problem for these provisions under the Byrd Rule is that any budgetary impact they might have would likely be ruled incidental to their policy impact. Yes, expanding benefits would surely increase federal spending, but that is not their primary purpose. Their purpose is to provide better health insurance for people — and, unfortunately, that puts them at serious peril under the Byrd Rule, which demands a more direct intent to change federal spending and revenue. Likewise, the ban on duplicative private coverage is a regulatory change that serves the bill’s policy agenda; it’s not a spending or revenue measure.

Republicans repeatedly ran into trouble with the Senate parliamentarian, the referee for these procedural questions, when they tried to repeal the Affordable Care Act’s insurance regulations mandating that certain insurance benefits be covered by private plans. The same principle applies here.

Those readings of the Byrd Rule’s application to Medicare-for-all do reveal possible compromises. You could simply lower the Medicare eligibility age to 0 and let every American join the Medicare program as it currently exists. You could even eliminate cost sharing for the services Medicare already covers.

But part of the theory of Medicare-for-all is it’s not another piecemeal approach. It is supposed to be a comprehensive remaking of American health care. The cause is undermined if the program doesn’t cover contraception, or if a private insurance market is allowed to remain and compete with the government plan, or if some budget gimmicks must be deployed to pass a bill, setting up future fights to belay catastrophic tax increases or a sudden loss of benefits.

Reconciliation, because of its limitations, is simply not the best way to produce major health care legislation. Obamacare was a compromised law because of the process that produced it. Republicans were probably never going to craft a popular health care bill, given the party elites’ desire to drastically deregulate an industry that Americans mostly want to see strongly regulated. But they couldn’t even write a bill that did satisfy their goals because of the Byrd Rule. That left them fighting for, in their eyes, an imperfect product.

Medicare-for-all would be the most dramatic expansion of the welfare state and restructuring of the US economy since the New Deal. That should give Democrats significant pause about trying to enact it through an inhibiting legislative shortcut. That admittedly leaves them with few satisfying alternatives: You’re back to trying to eliminate the filibuster, or electing a supermajority, or accepting more incremental changes that might have an easier time clearing the Byrd Rule but would not achieve the fundamental remaking of US health care that single-payer supporters desire.

The dream is closer than ever before to being realized. Medicare-for-all is now firmly in the Democratic Party mainstream. But reconciliation, by all accounts, doesn’t seem like the best path to finishing the job.