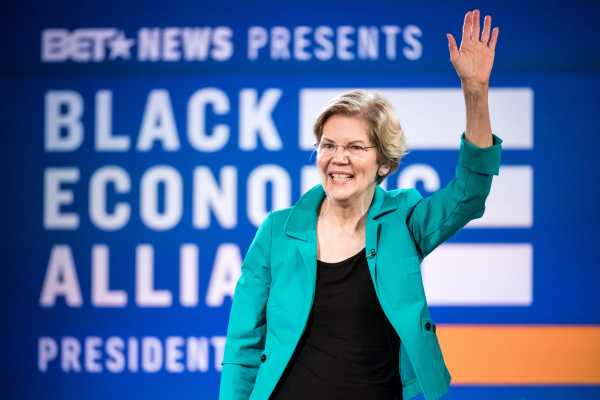 Warren’s proposal, the latest of many in her presidential campaign, would establish a new set of requirements for federal elections. It’s a hodgepodge of the many policies progressive activists have been calling for to expand voting rights and boost election security. The proposal draws a sharp contrast to Republican attempts, including under President Donald Trump, to create more barriers to voting, purportedly to combat voter fraud but in practice — and sometimes admittedly — in a way that makes voting harder for minority Americans who more often vote Democrat than Republican.

The plan, which would need congressional approval, would mandate automatic and same-day voter registration — letting voters opt out, and otherwise letting states remove people from the rolls only if they have “objective evidence of a legitimate reason to remove them, like death, change of address, or loss of eligibility to vote.” It would also make Election Day a national holiday, require a minimum of 15 days of early voting, expand overall voting hours, and allow voting by mail. And it would let people vote with a sworn statement of identity, instead of the arduous ID requirements that some states have placed for voting.

The proposal would also ban political gerrymandering, which currently allows state officials to draw congressional lines in a way that favors their political party. States would instead be told to “use independent redistricting commissions to draw federal congressional districts.” (For local and state elections, gerrymandering would still be an issue, left up to lower levels of government to deal with.)

Finally, the plan would attempt to bolster election security by replacing all current voting machines with “state-of-the-art equipment” and requiring “a uniform federal ballot.” This would get at a serious problem: A 2018 report from the Brennan Center for Justice, a public policy think tank, found that “41 states will be using systems that are at least a decade old, and officials in 33 say they must replace their machines by 2020.” By Brennan’s count, 43 states are using voting machines so old they’re not even manufactured anymore. Experts argue this not only makes voting machines more likely to malfunction but also vulnerable to security exploits that could be addressed with new equipment and software.

It’s a particularly timely issue, given reports of Russian attempts at tampering with American elections.

All of this would only be mandatory for federal elections, since that’s where Congress has jurisdiction. But as part of the proposal, Warren also wants to create financial incentives to get local and state governments to adopt the same standards for local and state elections. (If a local government wants to but the state government doesn’t, the local government can work directly with the federal government, under Warren’s proposal.) To this end, Warren’s plan gives states “a bonus for achieving high voter turnout rates.”

Other candidates, including Bernie Sanders, Beto O’Rourke, and Andrew Yang, have made different proposals regarding voting rights. But Warren’s is among the most comprehensive proposals.

Warren’s campaign estimated that her full plan would cost $20 billion over 10 years, which would be paid for through her wealth tax.

The big question is whether Congress would adopt the plan. If it did, there’s also a question of whether the proposal would survive legal challenges, since some conservatives will likely take issue with the federal government getting more involved in managing elections, a task historically left to the states.

If nothing else, though, the plan provides a guide to Warren’s priorities on voting rights — and they line up very cleanly with progressives.

One part of Warren’s proposal makes her priorities very clear: the financial incentive for states to increase voter turnout as much as possible, which shows that Warren’s goal is to make voting more accessible. As Warren wrote in a Medium post, “Voting should be easy.”

This is a not-so-subtle jab at Republicans, who have spent years exaggerating the threat of “voter fraud” to pass measures that restrict access to voting. President Donald Trump, for one, set up a voter fraud commission to investigate the issue after he claimed on Twitter, without any evidence whatsoever, that “millions” of people voting illegally had cost him the popular vote in the 2016 election. (The commission eventually shut down without finishing its work, in part because too many states, including some under Republican control, didn’t want to hand over sensitive voter information to the Trump administration.)

Republicans, particularly at the state level, have enacted all kinds of policies under the guise of voter fraud concerns: restrictive laws that require very specific kinds of ID to vote (so a state ID or concealed carry permit may be allowed, but not a student ID), early voting cuts, reductions in voting times, and widespread purges of voter rolls.

The reality, though, is that voter fraud is extremely rare.

Loyola Law School professor Justin Levitt studied voter impersonation, the kind of fraud that voter ID laws target. He found 35 total credible accusations between 2000 and 2014, constituting a few hundred ballots at most. During this 15-year period, more than 800 million ballots were cast in national general elections and hundreds of millions more were cast in primary, municipal, special, and other elections.

A 2012 investigation by the News21 journalism project looked at all kinds of voter fraud nationwide, including voter impersonation, people voting twice, vote buying, absentee fraud, and voter intimidation. It confirmed that voter impersonation was extremely rare, with just 10 credible cases.

But the other types of fraud weren’t common either: In total, the project uncovered 2,068 alleged election fraud cases from 2000 through part of 2012, covering a time span when more than 620 million votes were cast in national general elections alone. That represents about 0.000003 alleged cases of fraud for every vote cast, and 344 fraud cases per national general election, in each of which between 80 million and 135 million people voted. The number of fraudulent votes was a drop in the bucket.

What’s more, not all — maybe not even half — of these alleged fraud cases were credible, News21 found: “Of reported election-fraud allegations in the database whose resolution could be determined, 46 percent resulted in acquittals, dropped charges or decisions not to bring charges.”

So the problem that voter ID laws and other restrictions set out to fix isn’t really a problem that needs solving.

But maybe the goal of these kind of laws isn’t to combat voter fraud, but to suppress certain voters. As the New York Times reported, some Republicans have openly acknowledged that hurting Democratic voters is their goal.

So despite claims that this is really about the integrity of elections, enough Republican supporters have slipped in moments of candor to validate Democrats’ suspicions — that this is about stifling the fundamental right to vote for minority constituents Republicans don’t typically win. Warren doesn’t mince words in her Medium post, calling such efforts “racist.”

One question mark in Warren’s proposal is just how much it would actually increase voter turnout. The research has shown, surprisingly, that voter restriction efforts don’t seem to significantly reduce turnout, and the same appears to be true in the reverse. A bigger problem, instead, may be overall voter apathy, according to MIT political science professor Adam Berinsky.

At the very least, though, Warren’s proposal eliminates some of the excuses your friends might try to use to justify not voting.

Even if Warren does get elected to the White House, her proposal would require Congress to pass a bill. That would almost certainly require Democrats to take the US Senate — far from a sure thing. And if Democrats do take the Senate, any vote on Warren’s plan would require overcoming, or abolishing, the filibuster.

Even if the proposal manages to beat those odds and become law, though, it would likely encounter legal challenges.

Throughout US history, election administration has generally been left to localities and the states. This gives states the power to manage voter registration, early voting times (if there are any), whether someone can vote by mail, and other requirements, rules, and regulations regarding voting.

The federal government has at times directly interfered with localities and states’ roles, like when it stepped in through the Voting Rights Act to dismantle racist regimes that effectively kept black people from voting. But, by and large, election administration is left to the states.

This history would potentially give activists, as well as local and state governments, a means to sue the federal government should it try to interfere further in how localities and states run elections — and that’s very clearly what Warren’s proposal does.

To this end, Warren contacted several election law experts — Pamela Karlan of Stanford, Justin Levitt of Loyola Law School, Nicholas Stephanopoulos of the University of Chicago, Laurence Tribe of Harvard, Franita Tolson of the University of Southern California, and Justin Weinstein-Tull of Arizona State University — to get an opinion on whether her proposals can pass legal muster.

In a response, these experts suggested her plan could succeed:

The experts repeatedly cited former conservative Justice Antonin Scalia, who ruled in favor of congressional authority on federal election matters. Quoting Scalia, the experts wrote, “The Elections Clause was designed to allow Congress to preempt state law. ‘[T]he power the Elections Clause confers is none other than the power to pre-empt.’”

They also noted that Congress’s power over state elections is “more limited,” which explains why Warren offers financial incentives, instead of creating more mandates, for new election standards at the local and state levels.

Ultimately, though, the question of whether Warren’s plan passes legal and constitutional muster may fall on the Supreme Court. And the Court is now controlled by a conservative majority, following Trump’s nominations. Given that Chief Justice John Roberts’s Supreme Court already struck down key parts of the Voting Rights Act, it’s not unthinkable it might take a more constrictive view toward Warren’s proposal.

That, however, remains to be seen in the future. Before then, Warren is taking up voting rights as yet another cause as she tries to get into the White House in the first place.