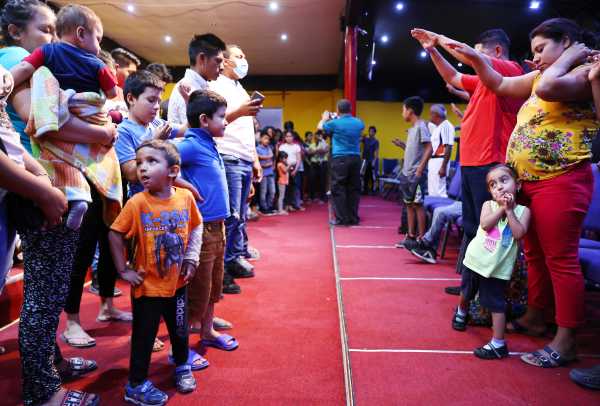 President Joe Biden says he wants to end the “Remain in Mexico” policy, a Trump-era program that has forced tens of thousands of migrants to await decisions on their immigration cases in Mexico for months.

In a seemingly contradictory move, Biden is first reinstating and expanding it. The program’s return was ordered by the courts. The policy’s expansion, however, was a choice made by the Biden administration.

On Thursday, the US reached an agreement with the Mexican government to revive the Migration Protection Protocols (MPP), also known as the “Remain in Mexico” policy. Under Trump, the policy allowed 70,000 migrants seeking entry into the US to be sent to Mexican border towns where many lived in squalid encampments or in overcrowded shelters and were targeted by criminal gangs.

Biden halted MPP shortly after taking office, fulfilling a campaign promise. But his administration has argued that it has no choice but to reinstate the program starting on Monday. A federal court in Texas ordered the administration to continue forcing migrants to wait in Mexico until it expands its capacity to detain migrants in the US. The ruling came as part of a lawsuit brought by Texas and Missouri; the Supreme Court has refused to block that lower court ruling.

Department of Homeland Security Secretary Alejandro Mayorkas nevertheless has maintained that the administration is committed to ending the program eventually.

“MPP had endemic flaws, imposed unjustifiable human costs, pulled resources and personnel away from other priority efforts, and did not address the root causes of irregular migration,” he wrote in an October memo. “MPP not only undercuts the Administration’s ability to implement critically needed and foundational changes to the immigration system, it fails to provide the fair process and humanitarian protections that individuals deserve under the law.”

But by reimplementing the program in the meantime with relatively few changes, the Biden administration has disappointed some Democrats, migrant advocates and even asylum officers tasked with screening people subject to the program. They have argued that the program is itself illegal and shirks the US’s obligation under federal and international law not to return migrants to danger.

Immigration advocates are also angered by the fact that Biden isn’t just reinstating MPP; he’s broadening its scale. Now, all other citizens of countries in the Western Hemisphere can be sent back under the program, which previously only covered Spanish speakers.

The administration isn’t doing so because the court ordered it to — that wasn’t part of the court’s instructions — and it hasn’t explained why it’s expanding the program, and did not respond to a request for comment on Friday. That leaves room for doubt about its commitment to ensuring the safety of migrants who will suffer from keeping MPP in place.

“We categorically reject the Biden administration’s claims that it can administer the Remain in Mexico program in a more humane manner,” Jorge Loweree, policy director at the American Immigration Council, said in a statement. “The longer the administration delays terminating this unlawful and cruel policy, the more people will suffer.”

The dangers associated with sending migrants back to Mexico are well documented. As of February 2021, a report by Human Rights First identified more than 1,500 murders, kidnappings, rapes, torture and other attacks on migrants returned to Mexico under MPP. And a survey of 20,000 asylum seekers trapped at the US-Mexico border conducted by the legal aid group Al Otro Lado found that 83 percent had been subject to threats or physical violence, including 89 percent of LGBTQ asylum seekers.

Despite that, and despite having permission from the lower court to do things differently, Biden isn’t changing much about the way MPP has been run. And his administration’s policy still leaves determinations about exemptions to the discretion of individual border agents.

The administration says it will complete all cases in the program within six months of a migrant’s return to Mexico. The Trump administration promised to clear cases in the same time frame, but largely failed to meet it in practice due to a lack of prioritization and backlogs in the immigration courts, limitations the Biden administration still faces.

Biden has also outlined exemptions to the program similar to those the Trump administration used, including for people with disabilities and the elderly. Given that border agents will be tasked with identifying those people, some may fall through the cracks.

The US has said it will also work with the Mexican government to provide “safe and secure” shelters for those enrolled in the program. However, shelter directors along the border say they’re already overwhelmed, and local officials in Mexico have yet to be approached by the Biden administration about funding to expand capacity. The two countries have also promised to provide safe transport to and from US ports of entry, and work permits, health care, and other services in Mexico.

Perhaps most importantly, border agents will now proactively interview migrants to determine whether they have a “reasonable possibility” of facing danger in Mexico before returning them under the program. It will be up to those agents to refer migrants who express any fear of harm if returned to Mexico to an asylum officer for further screening.

Migrants will be able to consult a lawyer before those interviews, though few will benefit from that part of the deal. Previously, only about 18 percent of people subject to MPP who showed up for their hearings were able to pay for a lawyer or had access to free legal counsel, according to the Transactional Records Access Clearinghouse at Syracuse University, which collects and analyzes data on US immigration courts.

But even with those changes, the administration’s own asylum officers say there is no way to ensure migrants’ safety under the “irredeemably flawed” program.

“While the administration has taken measures intended to mitigate some of the most egregious elements of MPP’s prior iteration, a program that requires asylum seekers to remain in one of the most dangerous parts of the world while their cases are pending in US immigration courts cannot guarantee their protection from persecution and torture, as required by US law,” the union for asylum officers tasked with screening people subject to MPP wrote in a letter on Thursday.

The Biden administration argued that its hands are tied by the courts when it comes to MPP. Immigrant advocates, however, say that the administration should have acted more quickly to build its case against the program, and that it is under no legal obligation to expand it.

The Biden administration first issued a memo terminating MPP in June. The Texas court found that memo didn’t provide sufficient justification for the decision on August 13. Still, it wasn’t until October 29 that Mayorkas finally issued another memo elaborating on the administration’s reasoning in a manner that might have boosted its case had it been released in July.

Karen Tumlin, an immigration litigator and director and founder of the Justice Action Center, said the Biden administration bears responsibility for dragging their feet on issuing the second memo — what she says is the “thing that was most likely to ultimately end the court order.”

“That delay is what caused the situation we are in today,” she said.

There is also nothing in the court’s order that suggests the Biden administration had to expand MPP. With the exception of Brazilians, non-Spanish speakers were not previously subject to the program, in part because they would have difficulty finding work in Mexico and would have no realistic means of sustaining themselves while pursuing their asylum claims in the US.

Now, all citizens of Western Hemisphere countries are subject to MPP unless they qualify for an exemption. That includes Haitians, who have faced racial discrimination and been targets of violent crimes in Mexico — and not just at the hands of gangs. According to the Al Otro Lado survey, 20 percent of Haitian asylum seekers had been subject to physical violence or extortion by Mexican law enforcement.

The Biden administration noted in its plan for reimplementation that the Mexican government may narrow the categories of migrants subject to MPP, or limit the number of non-Spanish speakers in the program going forward. As it stands, however, the program could cover more migrants than it did under Trump.

“The Biden administration was not ordered by the court to expand Remain in Mexico to new populations,” Ursela Ojeda, senior policy adviser for migrant rights and justice at the Women’s Refugee Commission, said in a press call. “They are going well above and beyond good faith compliance that’s required of them [by the court] to make this policy more cruel and more deadly.”

The hollowness of Biden’s January 6 speech