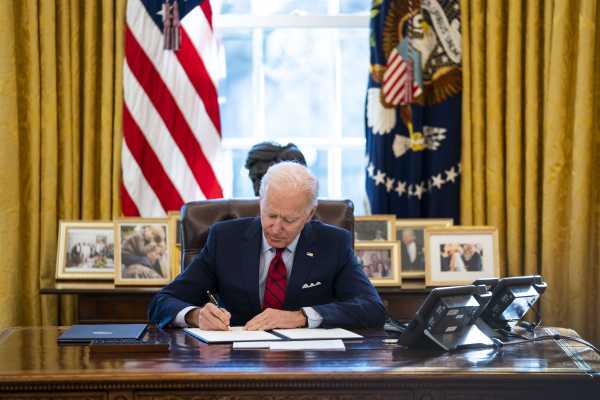 President Joe Biden has partially lifted a Trump-era ban that has severely curtailed legal immigration amid the pandemic, saying that it separated families and harms US industries who rely on international talent.

Family members of US citizens and green card holders will now be able to immigrate to the US, a phenomenon that former President Donald Trump previously excoriated as “chain migration.” So too will Individuals who were selected to receive visas through the diversity visa lottery, which allows the US to accept 55,000 immigrants annually from countries with historically low levels of immigration and was the subject of Trump’s infamous “shithole countries” rant.

The Migration Policy Institute estimates that the restrictions on those immigrants prevented about 26,000 people from obtaining green cards monthly since last April, when Trump implemented the ban.

However, many foreign workers applying for temporary visas are still barred from entering the US until at least March 31, when the existing ban is scheduled to expire unless Biden decides to renew it.

That includes skilled workers applying the sought-after H-1B visa, which the tech industry has come to rely on, and their spouses applying for H-4 visas as their dependents. Foreigners transferring to the US offices of their multinational companies through L visas, including business executives, and some scholars and people participating in cultural and work exchanges on J-1 visas are also still banned.

It’s not clear when Biden will lift restrictions on those visa applicants, which Trump saw as a threat to domestic workers who were laid off amid the pandemic. Though Trump administration officials argued at the time that the ban would save 525,000 American jobs, most of the layoffs ultimately occurred in industries that don’t employ a significant number of foreign workers coming on visas, suggesting that the ban did little to lower unemployment and could have harmed companies that employ both Americans and noncitizens.

The ban always excluded immigrants who are already in the US, existing visa holders, temporary workers in food production industries, and health care workers and researchers fighting Covid-19.

In a proclamation on Wednesday night, Biden said that the ban “does not advance the interests of the United States.”

“To the contrary, it harms the United States, including by preventing certain family members of United States citizens and lawful permanent residents from joining their families here,” he wrote. “It also harms industries in the United States that utilize talent from around the world.”

Revoking the ban is only the first step: the Biden administration will now have to tackle the extensive backlog of visa applications that built up while the ban was in effect. That includes some 473,000 visa applicants who were sponsored by family members in the US.

Lawyers for those affected say they will continue to challenge the remaining provisions of the ban affecting foreign workers in court. Last year, a federal judge had exempted 181 families from the ban who proved they had been harmed by it, including children who would have become ineligible for green cards after they turned 21 while the ban was still in effect.

In addition to facing pressure to revoke the visa ban, Biden is also being pushed revoke a Trump-era policy that continues to allow the US to turn away the vast majority of asylum seekers arriving on the southern border on pandemic-related grounds. He could do so by issuing a similar, unilateral proclamation.