On Wednesday, during a 49-day campaign tour of Texas, Democratic gubernatorial candidate Beto O’Rourke snapped at an event attendee who laughed as he was addressing the recent elementary school massacre in Uvalde.

During his stop at the Crazy Water Hotel in Mineral Wells, O’Rourke mentioned the shooting that killed 19 kids and two teachers in May — when an apparent heckler who was holding a Gov. Greg Abbott campaign sign began to laugh before O’Rourke could finish his point criticizing the availability of assault-style weapons.

"You could buy two or more, if you want to, AR-15s [and] hundreds of rounds of ammunition and take that weapon that was originally designed for use on the battlefields in Vietnam to penetrate an enemy soldier's helmet at 500 feet and knock him down dead–" O'Rourke said as laughter was heard.

That led him to profanely snap back at the unidentified person. 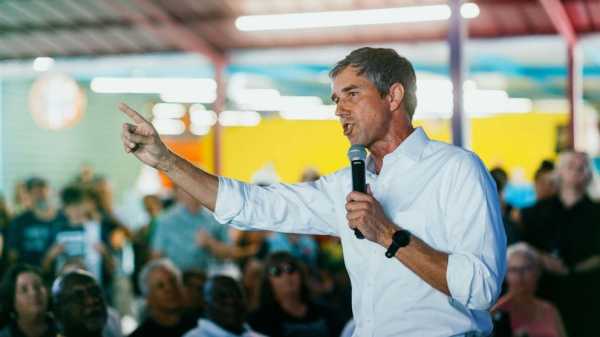 Video of the exchange, which quickly spread online, shows attendees began to cheer and clap for O’Rourke.

He later tweeted: “Nothing more serious to me than getting justice for the families in Uvalde and stopping this from ever happening again.”

O'Rourke, a former representative for El Paso, announced last fall that he was seeking to challenge Republican incumbent Gov. Greg Abbott. He previously ran to unseat Republican Sen. Ted Cruz but lost in 2018; he then went on to unsuccessfully seek the Democratic nomination for president in 2020.

Throughout those campaigns, O'Rourke has made gun control a signature issue.

He plans to continue to holding 70 public events in more than 65 counties in the lead up to November's election.