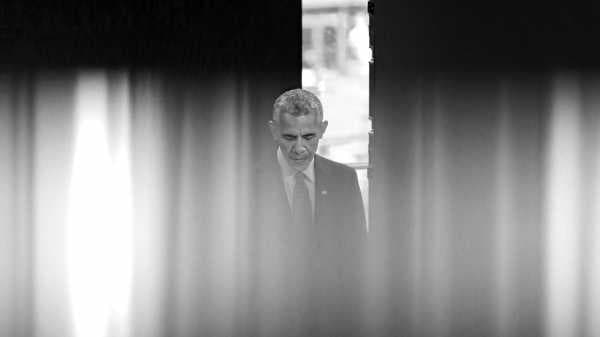 It’s useful, almost ten years after his election to the Presidency, to
recall how much of the opposition to Barack Obama during his first run
for that office was conducted via image, and the promise—or, really, the
threat—of images to come. The way he
looked was inextricable from the rest of his appeal as a potential leader, and
so, perhaps, a game of subliminal, symbolic tit for tat was to be
expected. The latter months of Hillary Clinton’s losing 2008 primary
campaign were characterized by a Pyrrhically effective, subtly
racialized populist appeal to the people she referred to, at one point,
as “hard-working Americans, white
Americans,” in states such as Michigan and Ohio. As Clinton chugged beers and downed
shots of whiskey at every notch along the Rust Belt, her campaign
disseminated photos of Obama looking especially black or exotic, or
standing next to figures of questionable repute. There was the image of
Obama dressed in traditional Somali robes and a
turban, released in mysterious synch with the ongoing rumors that he was a
crypto-Muslim and that, as a kid living in Indonesia, he had been
educated at a madrassa. (The Clinton campaign denied spreading that
one.) Then, after the controversy over Obama’s former pastor, Jeremiah
Wright, and his more bombastic political utterances from behind the pulpit,
pictures of Wright and Obama together, in better times, flooded the
Internet and the airwaves.

The photo that never saw the light of day: Obama with Farrakhan in 2005 https://t.co/nUrPbYVy0q pic.twitter.com/MrjqRdJy9G

When I saw a recently released
photo, by Askia Muhammad, of Obama and a beaming Louis Farrakhan, I immediately
thought of the Clinton campaign. What fun they could’ve had with this
one! Muhammad took the picture, in 2005, at a gathering hosted by the
Congressional Black Caucus, after Obama’s star-making turn at the 2004
Democratic National Convention but before it was clear that the Senator
would offer himself as a candidate for President—when, in other words,
the man was pure potential, unsullied in the eyes of hopeful Democrats.
After some pressure from one of the caucus’s staffers, Muhammad agreed
to bury it. Now he plans to include the picture in an upcoming
self-published book; Talking Points Memo asked to run the photo after
learning of it from a newsletter written by the journalist Richard
Prince.

For me, the star of the picture is
Farrakhan, who understands—better, maybe, than anyone else in American political
and cultural life—just how much power he can wield without uttering a
word. He seems to relish backing black liberals into a corner, most
recently Representative Keith Ellison, whose campaign for D.N.C.
chairman, last year, devolved into a referendum on his past friendliness with the
Nation of Islam. Farrakhan is the author of vile, uncountable,
unreconstructed, cause-derailing anti-Semitic slurs, but his Million
Man March made him and the Nation a stubborn, unignorable feature of
the political landscape for black would-be public servants who came of
age in the nineteen-nineties. Obama’s early career in Chicago was, in
part, an exercise in performing an “authentic” blackness that opponents
like the former Black Panther and current congressman Bobby Rush, who
dealt Obama his first and only electoral defeat, in 2000, insisted he
lacked. So he’s no exception to Farrakhan-induced headaches: Obama attended
the March, and spent time during the 2008 campaign playing down an
unwanted and wildly unhelpful endorsement from Farrakhan.

Indeed, it’s a sign of Farrakhan’s oddly lasting hold on popular
influence that he was even invited to clink drinks with the members of
the C.B.C. He has by far the widest and most genuine smile in Muhammad’s
photo—the folds under both of his reddish cheeks ripple. His irises
shine, and his hair is slicked into a boyish, innocent part. A garish
tie, blue on blue, disappears into his black vest. One can discern two
unspoken comments in his expression: “Got him!,” and, also, “Who, me?”

Obama, in his usual dark-on-dark, smiles more neutrally, and might be on
the brink of recognizing the gravity of the mistake-in-progress that the
exposure represents. This past week, the response, both to the picture
itself and to the fact of its years-long suppression, was predictable,
if not totally unwarranted: Fox News latched on, and the lawyer and
lifelong Democrat Alan Dershowitz—who, last January, had threatened to
leave the Party if Ellison won the prize at the D.N.C.—declared that he
never would have campaigned for Obama had he seen him standing near
Farrakhan back when. I’m sure he’s not the only one. Muhammad, that
anonymous C.B.C. functionary, and Farrakhan, with that faux-harmless
smile, all knew it: if that picture spreads in 2007 or 2008, a whole
different history ensues.