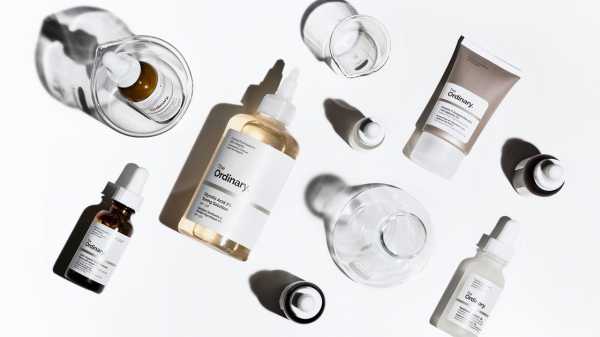 On a recent evening, when I visited the first New York outpost of
Deciem, a Toronto-based skin-care brand, the store’s back room had a
mood of hushed giddiness, like there was a secret craps game going on
and all the players were winning. The rear chamber of the narrow space,
appointed in gleaming white subway tiles and aquamarine neon, is where
Deciem sells products from its most popular line, the Ordinary, which
aims to undercut the rest of the booming skin-care market by selling
luxury ingredients at wholesale prices. Customers (mostly women, a few
men) scurried around like they were at a fire sale, grabbing products
off the shelves by the handful. They filled their wire baskets with
vials of
retinoid,
a much-heralded wrinkle-fighting compound that sells for more than
eighty dollars in serums at Sephora and can be bought for $13.90 from
Deciem. They perused rich rose-hip oil ($9.80) and de-puffing
caffeine solution ($6.70) and a plumping serum, simply called Buffet,
that costs $14.80 and contains a smorgasbord of peptides meant to save
the nasolabial folds from the ravages of time. As supplies dwindled, an
air of competition intruded. Two customers lunged at the same time for
the last vial of A.H.A./B.H.A. peeling solution, a cabernet-tinted gel
that earlier this month was the subject of a viral Facebook
post,
in which a woman joked about using her menstrual blood as a face mask.
Another woman inquired about the sought-after seven-per-cent glycolic
toning lotion, which had been out of stock for days. “But when will you
get it back?” she asked, with no small amount of desperation in her
voice.

The founder and C.E.O. of Deciem, Brandon Truaxe, was a computer
programmer before he got into the beauty business. He came up with the
idea for Deciem after working on software for a skin-care lab and
noticing the drastic difference between the cost of raw ingredients and
the price of finished products. Many of the chemicals used in skin care,
like niacinamide (a pimple fighter) and hyaluronic acid (a moisturizing
element that slakes dry pores), are dirt cheap to produce but are marked
up by skin-care companies when they are mixed together into miracle
creams du jour. Truaxe decided that if he developed the chemicals
himself, in an in-house lab, and offered them in their purest, most
isolated forms, he could cut out the middleman and offer the same
products as other brands at drastically lower prices.

Truaxe launched
The Ordinary, in August of 2016, almost as a provocation (on the Emma Guns
podcast,
in September, he called the beauty industry a “just a lot of gray
hoo-ha”), with twenty-seven products sold exclusively online. He figured
that word would spread gradually through beauty circles. Instead, orders
flooded in at a pace much faster than his Canadian lab could meet, and
products started to accumulate long wait lists. When the company
announced, in early 2017, that it was introducing a seven-dollar
foundation that would rival the most expensive formulations at
department stores, the wait list swelled to more than seventy-five
thousand names. “It was the biggest disaster,” Truaxe said on the
podcast. “We don’t plan a waiting list. Nobody plans a waiting list.
This is not an Hermès bag. It’s skin care.”

But skin care is, in many ways, the new cult clutch, and Truaxe has
cannily tapped into the exploding market. He named the company Deciem
because he intended to launch ten lines under the brand’s umbrella;
instead, by the end of the year, he and his co-C.E.O., Nicola Kilner,
will have launched at least twelve. When I stood in the middle of the
melee at the Deciem store—one of fifteen scheduled to open around the
world this year, including at least two more in New York—I thought of a
viral
tweet that keeps resurfacing on the Internet, in which a young man imagines a
woman’s nighttime routine: “My future wife prolly getting ready for bed,
mixing her lil skin care products rn lol apply ya mask and get some
sleep ily my lil chemist.” The tweet’s cutesy condescension
notwithstanding, it’s true that the skin-care craze, and the Ordinary in
particular, has a way of turning its most devoted adherents into amateur
scientists. The Ordinary’s products come in unadorned dropper bottles
that look like prototypes straight from the lab. Most contain just one
ingredient —salicylic acid, ascorbyl glucoside, matrixyl—and customers
are encouraged to devise their own regimens, concocting magic potions
with a squirt from bottle A, a drop from bottle B. The Reddit forum
Skincare Addiction contains hundreds of thousands of posts about “TO,” with people swapping
tips about what order and in what amount to use each ingredient. The
brand further foments this obsession on its Web site, which is stuffed
with detailed descriptions of chemical compounds that often need
deciphering from the online hoard. The Ordinary is the first modern
beauty brand to earn acolytes by making them feel smart enough to know
how to decode it; it turns skin optimization into a nerdy club, where
the cost of initiation is about what you’d pay for a latte.

After hearing about the brand from friends, last year, I found myself
deep in the rabbit hole of Deciem’s
Instagram, where Truaxe, a
perfectly coiffed thirty-nine-year-old, often appears in videos. He is
obsessed, above all, with “transparency,” a buzzword that has been
embraced by other cost-cutting brands like Warby Parker and
Everlane,
whose first New York brick-and-mortar store is next door to Deciem’s, in
Nolita. In a recent
update, he
appeared close to tears as he announced that Deciem was cancelling all
publicity efforts. “Marketing is simply a way to convince people to buy
what they don’t want or don’t need,” he said, gazing warmly into the
camera.

In an industry full of obfuscation and profiteering, where it is
difficult to tell snake oil from argan oil, this is a seductive idea.
The lure of the Ordinary—which was introduced into Sephora’s online
store, in December, and sold out entirely within a week—is that it makes
customers feel as though they have somehow beaten the system, reaping
the benefits of skin care without getting sucked into the
beauty-industrial complex. The irony—which is surely not lost on Truaxe,
who refers to the Ordinary as Deciem’s “gateway brand”—is that the low
prices, more than any marketing campaign, seem to be persuading people
to experiment with skin-care products that they didn’t previously know
they wanted or needed. I now use at least eight of the Ordinary’s
products in regular rotation. This has cut my skin-care budget in half.
Do any of them actually slow sagging, or tighten pores, or decimate
smile lines? The only way to find out is to keep using them.