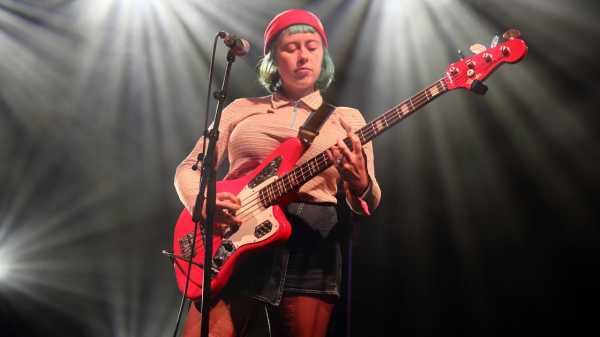 Since 2013, Girlpool, the Los Angeles duo composed of Harmony Tividad
and Cleo Tucker, has been spinning poignant punk songs about friendship
and relationships. On their latest album, “Powerplant,” Tividad and
Tucker have refined their talents for penning evocative lyrics
of healing and heartache, which often recall sweet dreams one wakes up
from just a moment too soon. The creative dynamic between the two is
fascinating: their discordantly harmonious vocal stylings, typically
sung in unison, meld in a way that makes lines about beige rooms and
getting lost at the corner store feel thrilling.—Paula
Meija (Brooklyn
Steel, Feb.
8.)

On Madonna’s 2015 comeback single, “Bitch, I’m
Madonna,” the
contributions by the producer and d.j. Diplo are clear: a mashing line
of saxophone-like bass plays through the chorus as in countless other
E.D.M. climaxes. But the staccato of Madonna’s lyrics and the synth
arpeggios are trademark Sophie, the London producer who is smoothing
out club music’s hard edge, one shiny composition at a time. Sophie’s bubbly,
tongue-in-cheek
track “Lemonade” was
irritating electronic purists even before it ended up in a McDonald’s
commercial, and the producer’s shadowy work with the label PC Music is
regarded as some of the best and most bewildering pop around, all
baby-pitched vocals and kawaii indulgence.—Matthew Trammell (Elsewhere, Feb. 8.)

This quartet from the Hudson Valley is slicing and dicing indie rock in
its own image, forging a collaged, frantic take on worn-out structures.
Palm formed amid the fruitful live-music scene at Bard College;
its songs bob across odd time signatures, looping together asymmetrical
phrases and barely tonal harmonies as if applying William S. Burroughs’s
cut-up technique to pages of sheet music. The jazz-ish result is
entrancing, with the knotty rhythms supporting the coy vocals of Eve
Alpert and Kasra Kurt. “Shadow Expert,” the band’s latest LP, is an
essential listen for long road trips through weird towns; Palm
will celebrate a new album, “Rock Island,” due out on the day of
this show.—M.T. (Market
Hotel, Feb. 9.)

On her SoundCloud page, this
classically trained cellist and vocalist extends an invite to “dive into
my easily distracted mind.” Her work is anything but distracted, though:
Lu’s first EP, “Church,” whirs with intent, and with discipline. Hailing
from North Carolina, she grew up in a devout family of Jehovah’s
Witnesses, but she eventually moved away from organized religion through
music. “Church” was recorded live, in one take, and Lu typically
performs alone, with just a loop pedal and her cello, trusting herself
while asking for our confidence as well. She reprises the music of Alice Coltrane, along with Laraaji, in a celebration of the late musician’s
life.—P.M. (MOMA PS1, Feb. 11.)