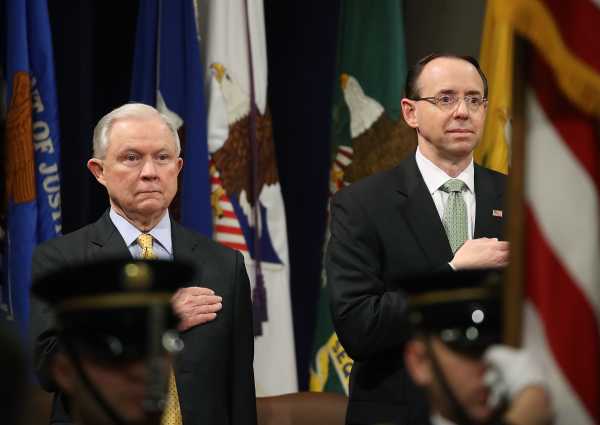 Deputy Attorney General Rod Rosenstein was America’s longest-serving district attorney, a one-time nominee to the Fourth Circuit Court of Appeals, and a part of the Office of the Independent Counsel under Ken Starr, tasked with investigating then-President Bill Clinton. President Donald Trump even appointed him to his role at the Department of Justice.

But now Rosenstein is part of the “deep state.”

He’s been absorbed into a right-wing narrative designed to discredit the Russia investigation. And the fact that Trump himself appointed Rosenstein to his role as deputy attorney general isn’t stopping it.

The conservative organization the Tea Party Patriots just released an ad with Rosenstein as the villain, demanding his metaphorical head on a plate. In it, Rosenstein, a longtime advocate of conservative law enforcement rhetoric, is described as “a weak careerist at the Justice Department protecting liberal Obama holdovers and the deep state instead of following the rule of law.”

The ad was released immediately after the House Intelligence Committee made the Nunes memo public. While the document itself proved to be dramatically overhyped by the right (and actually disproved several Trump talking points regarding the Russia investigation), it’s being championed by many conservatives as evidence of rampant anti-Trump bias within the FBI — and Republicans on Capitol Hill have gotten on board. Together, it amounts to a campaign to convince Americans that the deep state has overstepped its bounds.

But Trump is not the victim of rogue intelligence and law enforcement agencies; he’s a victim of a “deep state” of his own making. Each new enemy was once a trusted ally — from Rosenstein to former Trump campaign manager Paul Manafort to adviser Carter Page. They were all his guys, until they weren’t. Now they’re his — and his movement’s — enemies, and the Republican Party is ready to help him make it so.

Rod Rosenstein wasn’t “controversial” — until Trump needed him to be

Before Trump appointed Rod Rosenstein to his role as deputy attorney general and the Senate approved his nomination by a vote of 94-6, former Attorney General Eric Holder tasked him with investigating a member of the Joint Chiefs of Staff. And before that, President George W. Bush nominated him to the Fourth Circuit Court of Appeals. In fact, Trump is the fifth president Rosenstein has served under. Rosenstein’s career has been largely constructed on a reputation for being intensely dedicated to stopping crime — and intensely apolitical. But that was then.

Now, Sen. Orrin Hatch (R-UT) is telling a CNN reporter that he has “confidence” in Rosenstein, but:

Rosenstein didn’t become “controversial” alone. He became controversial because he has continued to stand in the way of the president’s overwhelming desire to end the investigation into the Trump campaign’s ties with Russia — after initially giving Trump cover.

In May 2017, Rosenstein authored the memo that gave Attorney General Jeff Sessions the backing to recommend that Trump fire James Comey from his position as director of the FBI. Trump told Comey that Rosenstein was behind his firing in the dismissal letter, a story the White House repeated. Then-White House press secretary Sean Spicer told the media that “It was all [Rosenstein]” behind the firing. “No one from the White House. That was a DOJ decision.”

But Rosenstein’s memo never explicitly recommended firing Comey. And when Rosenstein appointed Robert Mueller as special counsel on May 17 — the same day he told Congress he knew Comey would be fired even before he wrote his memo — Trump turned on the man he’d appointed to the second-highest post in the Justice Department five months earlier.

A pattern of poor decisions and aggressive defense

This isn’t the first time that a onetime Trump ally became a danger to the administration. Again and again, from Manafort to Page to Michael Flynn, every obstacle to Donald Trump’s political and societal agenda was put in place by Trump himself.

Trump hired Manafort to run his 2016 campaign, added Page to his panel of foreign policy advisors, made Flynn his national security adviser, and appointed Rosenstein to the position of deputy attorney general. He made each of these decisions while claiming that he would hire “the best people” to his administration. Now the GOP and its supporters and defenders have been tasked with attempting to limit the damage of Trump’s hiring on Trump himself.

In fact, the GOP’s sudden interest in abuses of the Foreign Intelligence Surveillance Act — as depicted in the swirling media storm surrounding Rep. Devin Nunes’s memo regarding the FISA warrant application permitting surveillance of Page — is all contingent on Trump. Many of the same Republicans who demanded the release of the Nunes memo voted to expand the power of the Justice Department to surveil Americans through reauthorizing Section 702 of the Foreign Intelligence Surveillance Act. Its reauthorization even includes additional powers, such as the ability to monitor communications that merely reference a surveillance target, even if the communication isn’t directed toward that target.

In fact, before Nunes launched a campaign against “FISA abuse,” he decried a fellow Republican for attempting to reform the powers intelligence agencies have to surveil American citizens, telling Politico in May 2014 that Rep. Justin Amash (R-MI) was “Al Qaeda’s best friend in the Congress” because Amash supported FISA reform.

And Trump himself tweeted his concerns about FISA, but he focused entirely on how FISA may have been used to surveil members of his presidential campaign — and then quickly backtracked.

His interest in FISA reform, then, was only based on whether those reforms could be used to protect himself, not the American people and their constitutional rights.

Trump isn’t a victim of the deep state — he erected it. Now he’s expecting the sympathy of the American people for its impact on him. And he’s demanding that the Republican Party do its best to help him make his case that the people he selected for his presidential campaign and hired to work in the White House and across the administration are actually threats to his administration — and to us.