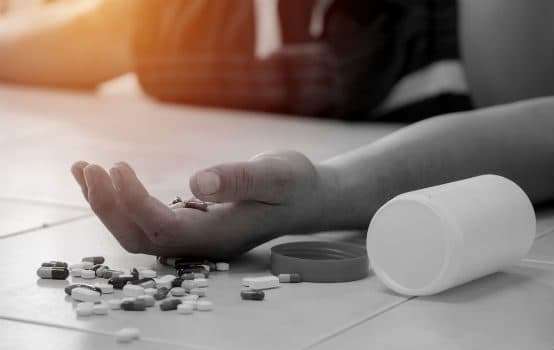 Each era seems to have the drugs that it deserves. In the 1960s, there was LSD. Inspiring euphoric fantasies or vivid paranoia, it could not have been an apter drug for years of utopian social progressivism and long, debilitating foreign war. In the 1980s, there was cocaine, and then there was ecstasy: drugs that fueled both stock market and acid house excess. Now we have opioids—painkillers, essentially.

In 2015, more than 100,000 people across the world died of opioid overdoses. In 2016, there were 64,000 deaths in America alone. As German Lopez observed for Vox, this was more than all of the United States’ combat deaths in Vietnam. Economic and criminal factors are underpinning this phenomena. The corrupt means by which Purdue Pharma promoted dangerously addictive medications has been amply documented. In 2007, Purdue paid $600 million in fines after being found to have falsely misbranded OxyContin as “abuse resistant.” While the “deaths of despair” narrative has been overstated, economic hardship has also played a role.

And yet one of the interesting things about the opioid crisis is how little it has influenced Western culture. Where are the films and books about opioid misuse? One has the feeling that it is not quite romantic enough to have tempted the imaginations of modern artists. LSD encouraged optimistic idealism, and heroin had a kind of outlaw glamor. Opioids ease pain rather than spreading love and peace, and are more associated with dropouts and disabled people than dissidents and dreamers.

Even when opioids have affected the lives of celebrities, they’ve made far less of an impact on poetry and music. Tragic, doe-eyed talents like Syd Barrett and Kurt Cobain are more artistically alluring than old, troubled veterans like Prince and Tom Petty. It would be impossible to isolate a representative subculture of opioid addicts. Their victims range from veterans to 10-year-old boys.

If there is a poet of the opioid crisis it is William Brewer, a West Virginian whose unassuming poems build up into stark and vivid documents of pain. The opening poem of his book Oxyana notes:

Where once there was faith,
there are sirens: red lights spinning
door to door, a record twenty-four
in one day, all the bodies
at the morgue filled with light.

While it may not be the case that opioid addiction results primarily from socio-economic distress, that certainly is a factor. Crack cocaine was largely associated with America’s inner cities but opioids have shattered whatever innocence small town and even suburban America maintained. Brewer’s poems contrast occasional images of rural beauty with the sad reality of barren landscapes, rusted farm equipment, and desperate attempts to score. As young people die, a town mirrors the landscape:

What is saddest in Brewer’s poetry are the memories of old dreams, dead because of drugs or deprivation or both:

Do you hear that? All the things
I meant to do are burnt spoons

It is in music that opioids have been most influential, even if there have still been fewer aesthetically enticing acts than in previous drug-fueled generations. From the Beatles to the Happy Mondays, bands produced joyous and dreamy music under the effects of psychoactive drugs. Punk and grunge were darker—associated with the grim rituals and consequences of heroin addiction—but they had a furious anti-establishment ethic. Opioids have inspired music that is dumb, anxious, and miserable.

“Yeah, I do them drugs,” slurred Lil Peep on his song “Drugz.” “Only do it for the pain.” “I hear voices in my head, they tellin’ me to call it quits,” he rambles in “Praying to the Sky.” “Found some Xanax in my bed, I took that shit.” Whatever you might say about the dangers of exposing young admirers to drugs—in the first five seconds of the video of “Awful Things,” which has been watched over 50 million times on YouTube, one is shown a car floor strewn with empty pill bottles—Lil Peep raps about opioids with honesty. He doesn’t portray them as opening the doors of perception or even as being fun, but as being an escape from anxiety and sadness. Lil Peep died at 21 of a drug overdose.

“I can’t even feel the pain,” drawled SmokePurpp on “Nobody.” “I put the lean [popular slang for drinks containing prescription-strength cough syrup] in my veins.” “I chug a pint and just go to sleep,” yelped his friend Lil Pump on “Molly.” Both ‘Purpp and Pump renounced Xanax use around the dawn of 2018. “We leaving Xanax in 2017,” tweeted the former with what might have been self-conscious concision.

Christopher Ricks struggled to get a book out of Bob Dylan’s lyrics, and it might seem tough to get a paragraph out of Peep’s, ‘Purpp’s, and Pump’s. Still, to patronize them is perhaps to miss the point. Their fans would make few claims for their poetic qualities. The trashiness is an essential aspect of the act. They are impassively absurdist, nonchalantly nihilistic, mixing boasts so juvenile they strike one as self-parody with bitter, miserable asides.

They appeal to their young fans as memes as well as musicians: so bizarre and shameless that it ironizes their bleak and dysfunctional themes. There is no rebellion except a snide middle finger, less to a corrupt authority than a meaningless world. Conventions are flouted not because there are better alternatives but because it offers passing entertainment. Drugs are taken less because they provide inspiration than because they offer a release. It is a pop-cultural expression of “lol nothing matters.”

I do not say this because I think that more poetic, and pretentious, forms of drug abuse offered more than opportunities for self-mythology. But it is disturbing that to many people, and especially to young people, cynicism and stupefaction are not simply all there is but all that one can aspire to have. Art that addresses opioids should not simply explain them, but attempt to achieve transcendence.