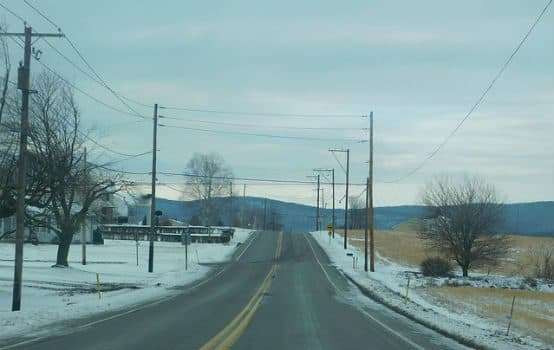 This winter, I went back to the woods. The backwoods.

My homeland is Central Pennsylvania, and I returned there to celebrate Christmas with the family and to help out with the coal furnace during the bleakest time of year (more on that later). Hunter S. Thompson spent a stint of his youth in my native neck of the woods, “in an abandoned coal town” as he put it, and deemed it “barren…[where nobody else] was between the ages of fifteen and fifty.” He wrote to a friend of the region’s “mountains of coal dust, dirty old people, ancient wrecks of houses” and said the experience was like “having a nightmare.”

James Carville famously labeled the stretch of land between Philadelphia and Pittsburgh as “…Alabama without the blacks. They didn’t film The Deer Hunter there for nothing,” while also noting “The state has the second-highest concentration of NRA members, behind Texas.” Others refer to it, both affectionately and derogatorily, as “Pennsyltucky.”

Thompson’s rural Pennsylvania gig was early on in his career, before, I think, his literary licensing and drug use were firing in full force, and I can attest that his descriptions are, even now, spot-on. As far as Carville’s assessment goes, despite being a Democrat, he’s not too far off either. Hunter safety class was a required part of my Catholic school’s curriculum in the second grade. SECOND GRADE. And the first two days of deer season were always school holidays.

Central PA is indeed a forgotten part of the country, with tired, old mountains, dreary weather, a generally pessimistic populace, an overgrown, unkempt natural beauty, and archaic everything. But it’s not completely charmless. It is home, after all.

Returning to Pennsyltucky during the winter months means enduring the Eternal Grey—days you’re not sure are really days exactly; more like sepia extensions of early dusk. One great cloud amasses its forces in early November and lingers over the sun until at least Easter, at which point it habitually snows.

The snow does make the Appalachian dilapidation very pretty, covering rusty, run-down, soggy, boggy, moldy things with a pure, clean blanket of white stuff. It doesn’t last though. Like a Catholic fresh from the confessional, a day or two’s time is enough to gather a layer of grime. Growing up, “don’t eat the snow” was a rule not because animals made it yellow (though they did), but because chimneys pouring out rich, black smoke left a layer of soot on top (and still do).

Hunting is a popular pastime here and camouflage is acceptable year-round and in all circumstances. Camo is seen at the gym (I know one regular who sports camo knee sleeves), at proms and weddings, on cars and in them. Camo, like guns, goes with everything. A billboard greets me on my way into town advertising camo coffee cups (if that isn’t dedication, I don’t know what is). It’s a wonder more people don’t accidentally collide with each other!

Going to the gun store is another popular regional pastime, even when hunting season is still months away. Here you can meet the “bitter” people Barack Obama referenced in 2008 who “cling to guns or religion.” The last time I was at my neighborhood guns and ammo shop, I overheard a gruff customer justify his purchase of another firearm to his wife by saying, “Trump’s not gonna be in office forever,” and then, apropos of nothing, “LIBERAL A**HOLES!”

Going to the gym in Pennsyltucky is more of a social exercise than it is actual physical exercise. Reformed high school steroid users, now in their 40s, leave the local prison where they all work and reconvene at the local YMCA, where they listen to “Rock Nation,” talking in dialects between sets about work, sometimes getting around to lifting the same weight with the same weights they’ve been lifting for 30 years.

Getting out of your car to walk to the Y in the winter, your senses are consumed by an unmistakable whiff of sulfur (from the nearby coal furnaces), until you actually walk into the Y, where they’re overcome by the fragrance of concession stand sauerkraut (just what you want to be smelling while you’re working out) and the pungent musk of prison men and sweaty exercise equipment, the latter having not been sanitized since their purchase during the glory days of the ‘Burgh’s Steel Curtain.

One time my city friend asked me, “Does your gym have a juice bar?” I literally lol-ed (or is it “l’ed-ol”?) and thought, “No, but we do have half-a-dozen buckets scattered about the weight room to catch drippings from the leaky ceiling.”

Allegiance to the Pittsburgh Steelers (or “Stilers” if you’re a yinzer, meaning you call groups of people “yinz” instead of “y’all”) and Penn State is assumed, and watching football is what one does to pass the overcast days between deer and spring gobbler seasons. The best way to experience both teams is to participate in the cultural phenomenon known as “Yuengs and wings.” To do so, deposit your camouflaged self in a bar that specializes in serving insanely cheap pitchers of Yuengling beer and hot wings and then do what comes naturally.

Alternatively, you can make a “Sheetz run,” which means popping down to the beloved local gas station that is oh-so-much-more than a gas station and stocking up on provincial goodies. The Sheetz chain of convenience stores is the glorious heartbeat of most hick communities in the Alleghenies, serving the most over-the-top deep-fried delights 24 hours a day, seven days a week, 365 days a year—perfect for the most imaginative pregnant woman or inspired stoner (“Morning Mac & Cheese” anyone?). It offers reliably clean restrooms on road trips, caffeinated sustenance, the aforementioned munchies, cigarettes, chewing tobacco, gasoline, and, if the state (liberal a**holes!) would ever change our absurd liquor laws, beer and wine too!

My seasonal existence in Central Pennsylvania is made all the more eccentric and amusing by the fact that we heat our 200-year-old home with a giant, locomotive-style steam engine powered by a coal furnace. We (usually my brother or me) tend to it several times a day (lots of shoveling), and my father routinely invites visitors to peek at the blazing inferno in the basement and reflect upon their immortal souls.

Tuesday is trash and ash day. Some 20 years ago, a black bear visited our trash shed outside, and ever since, we’ve had an electric zapping mechanism jerry-rigged up to it with barbed wire, and the trash men have never dared learn how not to get shocked. So we take the trash out to the road for them. And during the winter, we sludge through snow in the single-digit temperatures carrying misshapen metal buckets (between nine and 12, depending on the quality of that week’s coal) full of ashes up to the road for the trash men to haul away along with the garbage. We’ve also been trained never to come into the house empty-handed. Grabbing a log from the woodshed for the kitchen wood burner on the way in becomes second nature by Thanksgiving.

Coal country is full of blue-collar folk who are tough and independent and want simply not to be treaded on. There are hard times, hardcore people, and a road not far from me literally called “Hardscrapple Lane” (perhaps a linguistic ode to the favorite Amish delicacy, the ingredients of which my wise mother refused to tell illiterate four-year-old me).

But there are also reasons to love this place. I’m fond of the people—like me—who cling to God and their guns. I love that there are more country radio stations to listen to than pre-sets in my car. I recognize how rare and wonderful it is that I can drive out with my dad, pipe in his teeth and staticky Rush Limbaugh on the radio of our old Ford truck, to the “strippins” (abandoned strip mines) to shoot our guns and not be bothered.

It’s not great that the hospital I was born in has since gone bankrupt and been razed, or that our local newspaper features a “Fugitive of the Week” like he’s the winning Powerball numbers, but I appreciate the attitude most people possess of cherishing their wild freedom and valuing the great outdoors.

Central Pennsylvania truly is the land time forgot. It’s stuck in the ’80s (and in some places, the 1880s). There’s a reason “Groundhog Day”—a movie about Bill Murray being trapped in a time warp—was so believably set here. But from the looks of the modern world, I can’t help but wonder, are we really missing anything?

Teresa Mull is a writer living in Teton Valley, Idaho.