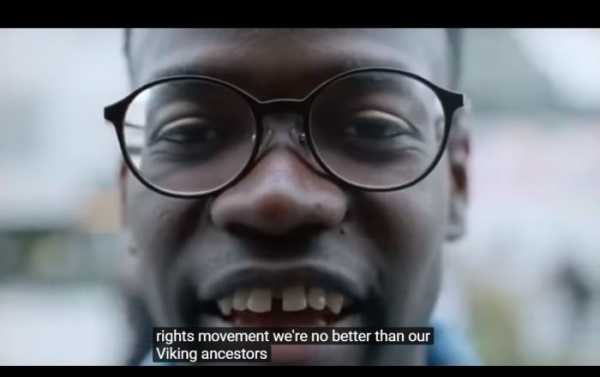 Scandinavia’s largest airline has ruffled many feathers with an overtly multiculturalist ad claiming that all of Scandinavian culture was “copied”.

SAS, the pan-Scandinavian airline, has landed in hot water over its new commercial and is being accused of peddling multiculturalist propaganda. Following the debacle, SAS deleted the contentious ad from YouTube.

In the ad, published on Monday night and widely shared and commented on social media, the airline stated that there was no such thing as Scandinavian culture and that all cultural expressions and innovations associated with Scandinavia, from Swedish meatballs to Norwegian paper clips, actually come from outside.

“We’re no better than our Viking ancestors”, a black man representing today’s Scandinavia claims in the ad. “We take everything we like on our trips abroad, adjust it a little bit, and voila”, the narrator continues.

The ad culminates in an unapologetic globalist, pro-immigration tirade.

“Scandinavia was brought here piece by piece by everyday people. We found the best of our home away from home”, the ad concludes.

While this is hardly the first time a major company has tried to ram a message down consumers’ throats SAS’s attempt flopped bitterly. Amid a downpour of criticism and an abysmal like/dislike ratio, the company quietly deleted the ad from its YouTube account.

Twitter users accused SAS of “pissing in the face of their customers”, tagged #GetWokeGoBroke and called the ad a “deliberate provocation”.

“New ad for Scandinavian Airlines insists that “nothing is Scandinavian”, and that it’s all imported. The names of Thor and Odin, the lands of sauna, fjords, and Abba are all erased into oblivion. This black gentleman states “We are no better than our Viking ancestors”, a user wrote.

​SAS’s Facebook page was also showered in unanimous condemnation. While some pledged to never again fly with the company, others encouraged fellow Scandinavians to be proud of themselves and their culture.

“Gillette: Let’s make the most disgusting commercial ever. SAS: Hold my beer”, a YouTube commentator wrote, referencing the much-hyped Gillette ad may saw as an attack on men and masculinity.

Scandinavian Airlines, commonly abbreviated as SAS, is the flagship carrier of Denmark, Norway, and Sweden and one of Europe’s top ten airlines. Headquartered in Solna, Sweden, and using the Copenhagen-Kastrup Airport as its main hub, the airline operates flight to some 90 destinations, carrying tens of millions of passengers annually with a revenue of billions of kronor.

The airline was founded in 1946 as a consortium to pool the transatlantic operations of three major Scandinavian airlines, Svensk Interkontinental Lufttrafik, Det Norske Luftfartselskap, and Det Danske Luftfartselskab.