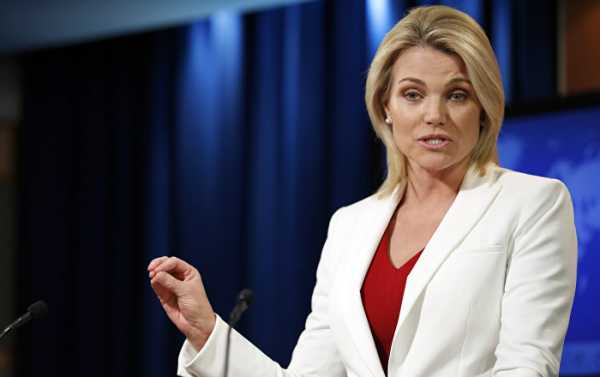 WASHINGTON (Sputnik) – The United States considers the latest incident on the Israeli-Syrian border to be Iran’s “calculated escalation” of tension, US State Department spokeswoman Heather Nauert said on Saturday.

“The United States is deeply concerned about today’s escalation of violence over Israel’s border and strongly supports Israel’s sovereign right to defend itself. Iran’s calculated escalation of threat and its ambition to project its power and dominance, places all the people of the‎ region — from Yemen to Lebanon — at risk.‎ The U.S. continues to push back on the totality of Iran’s malign activities in the region and calls for an end to Iranian behavior that threatens peace and stability,” Nauert said in a statement.

Earlier in the day, the Israeli army said its helicopter intercepted an Iranian drone launched from Syria and that the Israeli Air Force (IAF) struck Iranian targets in Syria, prompting fire from the Syrian air defense systems.

According to the IDF, during the attack, “multiple anti-aircraft missiles were fired at IAF,” and one F16 fighter jet crashed in Israel. An IAF pilot was severely injured and transferred to a hospital.

In the second wave of the attack, the Israeli forces struck 12 targets in Syria, including Syrian air defense batteries and Iranian military facilities, the IDF said.

Later, Israeli prime minister Benjamin Netanyahu said during a telephone conversation with Russian President Vladimir Putin that Israel has the right for self-defense and will defend itself against any attack or attempt to violate its airspace.

Meanwhile, Pentagon spokesman Maj. Adrian Rankine-Galloway told Sputnik that the United States is concerned about “destabilizing activities” of Iran and supports Israel’s right to defend itself.

“Israel is our closest security partner in the region and we fully support Israel’s inherent right to defend itself against threats to its territory and its people. We share the concerns of many throughout the region that Iran’s destabilizing activities that threaten international peace and security, and we seek greater international resolve in countering Iran’s malign activities,” Rankine-Galloway said. The spokesman stressed that the US Defense Department did not take part in this military operation.

The White House also said in a statement that Washington supports Israel’s right to defend itself from Iranian-backed militias in Syria and urges Iran and its allies to abstain from provocative actions.