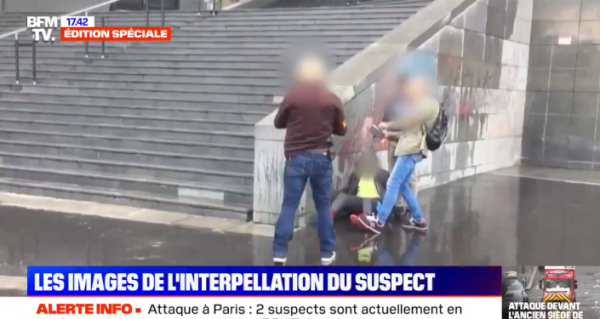 The man whose description matched that provided by victims and witnesses of the attack was detained by security forces on the steps of the Bastille Opera.

Mere hours after a violent stabbing attack that occurred on 25 September on Boulevard Richard Lenoir in Paris near the former offices of Charlie Hebdo magazine, footage of the main suspect’s arrest has emerged online.

The video, posted on Twitter by BFM TV, shows the suspect being detained by cops and escorted into a police car, though the faces of all people in the footage were blurred out.

​Earlier, French media reported that a man armed with a knife went on a stabbing spree in the area. A man who corresponded to the description of the attacker provided by victims and witnesses, was apprehended by security forces on the steps of the Bastille Opera.