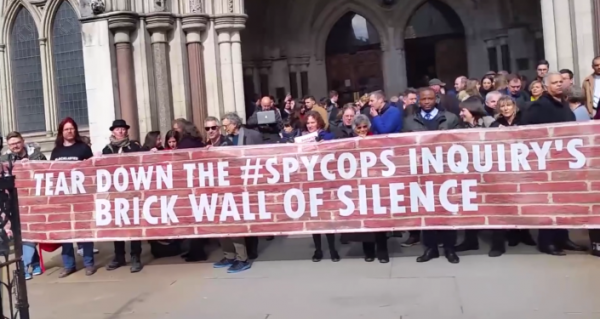 The Undercover Policing Inquiry was set up to investigate claims of police had infiltrated more than 1,000 trade unions, environmental and anti-war groups, and leftist movements, all operating legally within England and Wales. But the judge in charge refuses to permit the public to watch the hearings, a participant tells Sputnik.

Dónal O’Driscoll, a political activist, a writer and founder of the Undercover Research Group, is a core participant in the Undercover Policing Inquiry (UCPI). He explains to Sputnik that he only expects limited justice to result from the UCPI, because of Judge Sir John Mitting’s refusal to publicise the names of undercover police who infiltrate political organisations.

Sputnik: Describe some of the key pieces of evidence that have been heard at the Undercover Policing Inquiry thus far.

Dónal O’Driscoll: I think this falls into two categories. The opening statements, which set out a lot of the stories of those who were targeted. This was really important to set the scene, and spell out what we expected. It gave invaluable context, and some of those accounts made it to the public for the first time.

The other evidence came from former undercovers and there were some surprising bits in there. A key one was that a senior Special Branch officer HG Lawrenson had gone on to join blacklisting group the Economic League. Others was the degree to which Special Branch also reported and spied on children, and campaigns such as the School Action Union.

A lot of what I found key was the everyday processes of Special Branch work, how it hoovered up information regardless, and also the casual sexism and racism of it all. It just never crossed their mind that what they were doing was anti-democratic.

I’d single out the comment that deceiving women into having relationships with undercover agents was equivalent to drug undercovers ‘sampling the product’. Also, sometimes what was missing was key, such as the inquiry ignoring totally perverting justice by one officer who had been drink driving.
Sputnik: How have you been involved in the process?

Dónal O’Driscoll: I’ve been a self-representing core participant. This means as well as having a recognised interest in proceedings by the inquiry itself, I have been quite involved in many of the legal discussions and submissions. This involved supporting the challenges to the inquiry’s ridiculous processes and trying to keep it as open and accessible as possible, a genuine public inquiry. I also was able to make my own opening statement setting out what my hopes were for the inquiry.

In this I’ve had otherwise rare access to the hearing bundle with some advance sight of the material. Thus, I have spent quite a bit of time drawing up questions to be put to the various witnesses. We’ve been successful in having some of them asked of the former undercovers.

Finally, as part of Undercover Research Group, I have been involved in the Spycop Hearing Communications Group, which has worked on producing daily and weekly reports of inquiry events, as well as doing background research.

​Sputnik: Are everyday members of the public able to follow what is happening in the inquiry?

Dónal O’Driscoll: I think I can say that is a clear no, not as the inquiry has set it up. I wrote on why tone and witnessing issues were fundamental to understanding the evidence being given, and think it remains very much still the case that without seeing the officers, vital aspects are missed. The transcript cannot be easily followed and one does not get the exhibits, so fundamentally, it lacks a lot. Even with the amazing Police Spies Out Of Lives project of reading out the live transcript, they could not capture key aspects of the evidence.

​Sputnik: If this inquiry is meant to be public, why has the testimony not been live-streamed?

Dónal O’Driscoll: According to the inquiry this is to protect officers on security grounds as their real names have all been restricted (unless they were in a relationship for the most part). It’s blatant nonsense. Many of the officers did not make the applications themselves, but the Metropolitan Police chose to do it on their behalf. The inquiry chairman, Sir John Mitting, is being negligent in accepting the Met’s word at face value.

Something that came out of the recent hearings is how much the undercovers infiltrated non-violent groups, but shied away from groups that were supposedly engaging in violence. They don’t actually have anything to fear. And as the police are so fond of telling us, if you’ve nothing to hide, you’ve nothing to fear.

Sputnik: Why should the average person care about what is going on at the UCPI?

Dónal O’Driscoll: Because it points a spotlight on a deeply anti-democratic part of the state apparatus – the police. This is not simply historical, but continues to this day, an attitude that is dismissive of human rights and sees the entirety of the left wing as a problem. As well as the individual abuses, it also showcases the intense ideological bias against anyone fighting for positive change and a willingness to criminalise entire communities on the basis of thought crime. This has not changed; these units went on to become the current counter terrorism units which exist today and have the same outlook. By understanding how deep these issues go, we can better understand the problems facing us today.

And on a very basic level we should see justice being done. These spycops were a criminal enterprise condoned at the highest levels. There were times listening when I wondered what was the difference between them and a grooming gang.

Sputnik: What are your feelings about the ability of this inquiry to get at the truth and will the UCPI resolve the matter of infiltration and surveillance of social and political groups once and for all?

Dónal O’Driscoll: No, there is no chance of that, especially with Mitting in charge and sitting without a panel. The only thing which will do that will be constant pressure from the grassroots for systemic political change. I’d urge people to support the work of Netpol in this regard, but not just them. There are many other groups out there seeking to hold police to account, such as INQUEST, The Monitoring Group, Northern Police Monitoring Project, legal observers and so on.