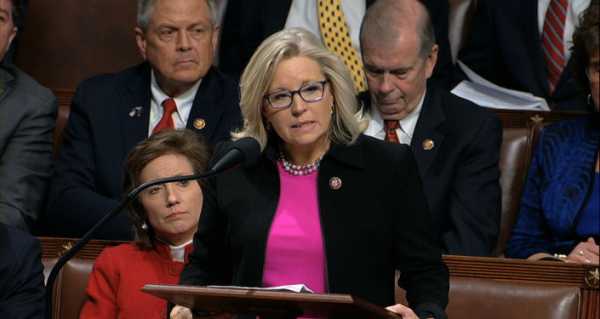 Despite growing sentiment that US President Donald Trump has become a political liability for the Republican Party in the wake of the January 6 attempted putsch by his supporters, polls show sizable support for him among the party base.

After throwing her support behind the impeachment of Trump earlier this week, Rep. Liz Cheney (R-WY) is facing down another rebellion – this time by Trump loyalists in the House, who are demanding her resignation from her post as chair of the House Republican Conference.

Three Republican lawmakers rallied against Cheney, the GOP’s third most powerful member in the House, after she voted on Wednesday to charge Trump with inciting the insurrection by his supporters on January 6 at the US Capitol.

Trump announced on Monday that Jordan would receive the Presidential Medal of Freedom for his various conservative crusades against liberal initiatives, including defending Trump during his first impeachment in 2019-2020. Most recently, Jordan voted against certifying the results of the November 2020 election even after the process was interrupted by the deadly insurrection by Trump supporters, sending lawmakers scrambling for safety.

A resolution being circulated among Republicans notes that Cheney’s vote “does not reflect that of the majority of the Republican Conference and has brought the Conference into disrepute and produced discord.”

However, Cheney wasn’t the only representative from Trump’s own party to vote for the impeachment article that could remove him from office: nine others in the House also backed the move. Still, 93% of House Republicans voted against impeachment, and two-thirds still voted not to certify the election results.

The move against Cheney by some Republicans comes even as others relish in the opportunity to be rid of Trump, whose sudden conservative streak in the 2016 election campaign and crass anti-establishment populism have never entirely been welcomed by older party leaders. In the run up to the 2020 election, a powerful group of “never Trump” Republicans formed the Lincoln Project, a political action committee that expressed conservative support for Joe Biden, who won and is now the US president-elect.

Senate Republicans are also more disposed to convicting Trump than they were a year ago, when he was impeached for abuse of power and obstructing Congress in relation to a scandal involving US military aid to Ukraine. Senate Majority Leader Mitch McConnell (R-KY), who leads Republicans in the Senate, has reportedly let it be known he supports impeachment and hopes it gets Trump kicked out of his adopted Republican Party completely. However, the GOP senator is in no rush to convene the trial before January 20, when Trump is legally required to leave office and Biden is sworn in as the new chief executive.

U.S. President Donald Trump is seen on a screen speaking to supporters during a rally to contest the certification of the 2020 U.S. presidential election results by the U.S. Congress, in Washington, U.S, January 6, 2021

Trump has claimed Biden’s election victory is fraudulent and that he is the true victor, despite several recounts and much-delayed result certifications by hotly contested states. The insurrection at the Capitol, which aimed to block certification of those results, came immediately after Trump hosted a “Stop the Steal” rally at the White House. After the putsch was crushed, thousands of National Guard troops were deployed to Washington, DC, to ensure a peaceful transition of power, and federal prosecutors are pursuing sedition and conspiracy charges against the rioters.