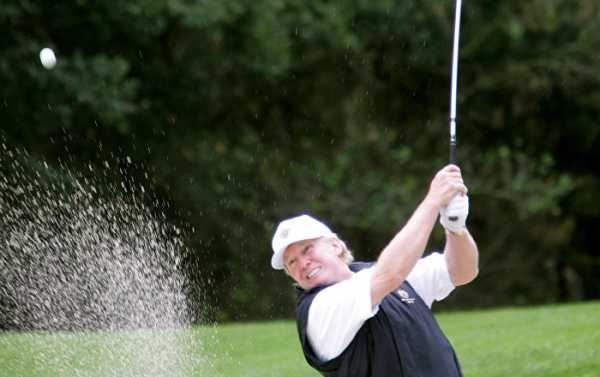 After securing 98% of the hypothetical support of the Israeli population in the upcoming prime ministerial elections, the golf-loving US President Donald Trump has managed to win a tournament at his own club without ever participating, Golf.com reported.

A new plaque on his locker at the Trump International Golf Club in West Palm Beach, Florida, has commemorated his title as the 2018 men’s club champion.

The commander-in-chief, in fact, didn’t even take part in the tourney, but convinced the actual winner, Ted Virtue, the 58-year-old CEO of a New York investment firm called MidOcean Partners, to stage a one-on-one nine-hole, winner-take-all match for the title, the report claims, citing multiple sources.

“The only reason you won is because I couldn’t play”, Trump allegedly told Virtue, complaining that his presidential duties were keeping him away from the tournament, although according to trumpgolfcount.com, the leader of the free world made 20 visits to the club in 2018, and made a total 67 trips to his golf properties that same year.

Virtue accepted the challenge: the final score was not clear, but Trump allegedly came out on top, and offered to share the title.

Earlier this week, Axios reported that the businessman-turned-president claimed that 98 percent of voters would have supported him if he ran in the Israeli prime ministerial elections. He cited his accomplishments, pointing out his controversy-sparking decision to move the US Embassy to Jerusalem and recognise the city as Israel’s capital.