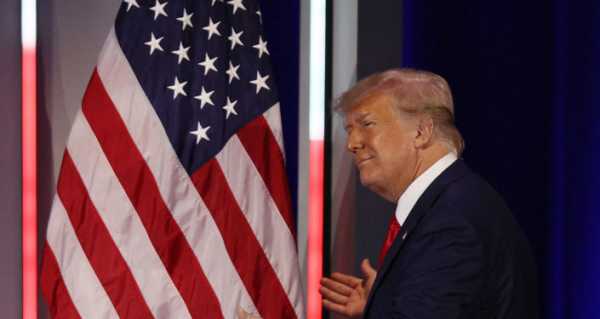 Ex-US President Donald Trump has repeatedly denied Democrat Joe Biden’s win in the 3 November 2020 presidential election, which the former POTUS claimed was the most corrupt vote in American history.

Speaking to Republican National Committee donors at Mar-a-Lago on Saturday, former US President Donald Trump focused on a host of sensitive issues, including the 2020 presidential election, which he reportedly described as “bulls**t”.

The Washington Post cited an unnamed attendee as saying that Trump also hit out at former Vice President Mike Pence over the lack of “courage” to send the certification of the Electoral College votes back to state legislatures following the 3 November election.

McConnell is a “dumb son of a bit*h”, Trump said, according to CNN. The former US president has repeatedly denied responsibility for the 6 January violence, which saw scores of Trump supporters besiege the Capitol in a bid to prevent the certification of Democrat Joe Biden’s victory in the 2020 election.

During the Mar-a-Lago speech, Trump also pledged his commitment to the Republican Party, saying that he will help it win majorities in the House and the Senate in the 2022 midterm elections. He, however, remained tight-lipped on whether he will seek a second term in 2024.

The Republican Party lost its majority in the House in the 2018 midterm elections, following the GOP’s eight-year control of the chamber. In 2022, the party will need just five seats in order to take back the House.

Separately, he touched upon the COVID-19 vaccines, which the ex-POTUS claimed should actually be called “Trumpcine” by everyone, apparently to underscore his role in initiating the “Warp Speed” operation almost a year ago to create a vaccine to fight the coronavirus.

Last month, Trump recommended that his supporters get vaccinated against COVID-19. The former US president himself was inoculated before leaving the White House on 20 January.

The Mar-a-Lago gathering also saw Trump referring to migrants as violent criminals “coming in from the Middle East”.

The remarks came after Trump called such an increase a “spiraling tsunami”, warning that under Biden the situation with refugees in the US “will soon be worse, more dangerous, and more out of control than ever before”.