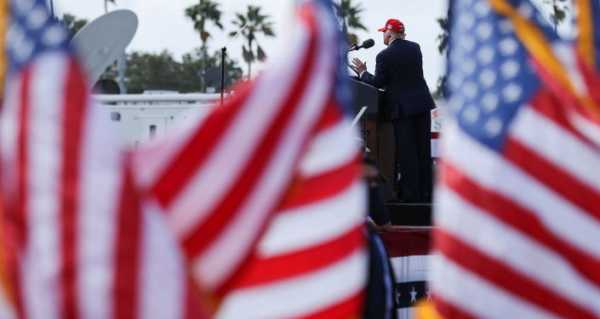 Florida is one of the battleground states in the looming election on 3 November, where, according to the latest polls, the former vice president holds a 4-6-point lead over President Trump.

US President Donald Trump and his Democratic rival Joe Biden have held rival rallies in Florida on Thursday, where the two presidential candidates have touched upon a number of issues, including the COVID-19 pandemic, the economy, and immigration policies.

Trump Slams Europe for Lockdowns, But Says Masks Are a Must

Speaking in Tampa, the president said that the results of the Obama administration’s economic policies were the worst since the Great Depression.

He said that wearing a mask is not controversial to him. “You get close, you wear a mask. Social distance, social distance”, he said.

Trump also noted that critics compared the United States to Europe earlier with the implication that countries there like Germany and France were doing better.

Biden, who actually spoke at a socially-distanced organised rally, vowed not to shut down the economy, but promised to “shut down the virus”.

The former vice president accused Trump of ruining the economic recovery that he and Obama had worked on, saying, “Now [Trump]’s squandering that economy like he’s squandered everything else”.

He added that Trump is “spreading more than just the virus — he’s spreading division and discord”.

Meanwhile, Biden attacked Trump for his policies towards Cuba and Venezuela. According to him, the US president “can’t advance democracy and human rights” in these two nations, “when he has embraced so many autocrats around the world”. He added that reimposing sanctions on Cuba “isn’t working” and that the country is “no closer to freedom and democracy today than it was four years ago”.

Biden also said that if Florida “goes blue”, the presidential race is “over”, apparently hinting at his definite victory. So far, according to the latest polls, Biden is leading Trump by a narrow 48.5% to 46.9% margin in Florida.