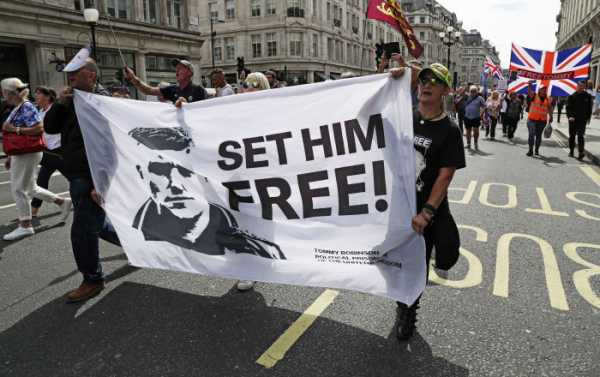 Robinson spent the night in police custody along with three other men. He insists that he was acting in self-defence after a stranger confronted him in the street. The EDL founder is being investigated for assault and violation of public order.

British activist Tommy Robinson has been arrested in Barrow, England, after punching a man who spat in his face.

Cumbria Police said that Robinson, whose real name is Stephen Yaxley-Lennon, was arrested on Thursday night following a report of an assault. He is also being questioned on suspicion of a public order offence, along with three other men who have not been identified.

Footage has emerged of Robinson’s conversation with officers leading up to the arrest. He recounted that a man on a bicycle came up up to him and called him a “racist prick”.

“I said, ‘mate, do us a favour go away.’ He then phleghmed in my face,” Robinson told the police, adding that he considered it to be an assault and “acted in defence”.

“I didn’t know if he had a knife, if he had anything,” he explained, “so I just made sure that he ended up on his bum.”

Robinson, 37, is best known as the founder and former leader of the English Defence League, an organisation that cast itself as fighting against radical Islam but has been accused by critics of Islamophobia.

The activist was in the Cumbria town protesting over the case of Ellie Williams, a 19-year-old woman who claimed she had been drugged, beaten up and raped by an Asian grooming gang for two years. A year-long police investigation failed to find evidence of grooming gangs in the area, and Williams was charged two weeks ago with making false rape allegations and falsifying evidence.