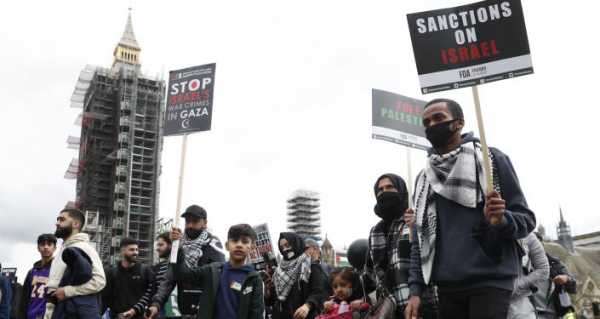 LONDON (Sputnik) – Several thousand people march in a peaceful rally in central London in support of Palestinians following the recent escalation of hostilities between Israel and Gaza, a Sputnik correspondent reported on Saturday.

The demonstration headed towards Westminster and the buildings of the British government with Hyde Park as the final destination. The protesters chanted “Freedom to Palestine!,” “Sanction Israel” and “Stop apartheid.”

​The demonstrators demand Israel stop evictions in East Jerusalem and call on the UK government to take measures, such as sanctions, in order to prevent the “ethnic cleansing” of the Palestinian population.

Reinforced police units have been in charge of security in the UK capital during the rally. So far, no incidents have been reported. The districts of the city where the march passes are cordoned off.

People have been protesting Israeli actions in the Gaza Strip across several countries since the start of the hostilities. On Thursday, Israel and the Hamas movement agreed to an Egypt-brokered ceasefire, after 11 days of rocket attacks and airstrikes that left 243 Palestinians and 12 Israelis dead.