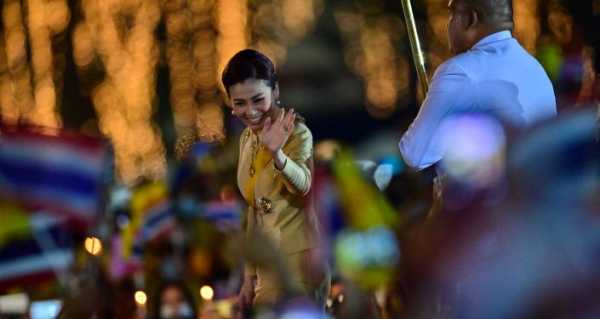 Thailand’s monarch King Maha Vajiralongkorn is living a life many would envy. In 2019, he named Major General Sineenat Wongvajirapakdi his royal consort alongside official wife Suthida Tidjai. The mistress, however, was soon stripped of all her titles and reportedly sent to jail. She made her way back to the royal court last year.

Thai Queen Suthida, wife of King Maha Vajiralongkorn, was finally spotted in public after months of absence and speculations about her whereabouts, the Daily Star reports, following a “nude” scandal that saw over a thousand of private photos of second royal consort Sineenat Wongvajirapakdi being leaked online.

The leakage of some “very explicit” images of the King’s mistress was seen by many as an attempt to sabotage Sineenat’s position within the court and publicly humiliate the woman following her return to high-profile “royal consort” status last year. Many journalists linked the scandal to internal rivalry between Queen Suthida and mistress Koi – as Sineenat is often nicknamed.

And then Queen Suthida disappeared from public sight.

German tabloid Bild suggests that the occasion also marked Sineenat’s coronation as Thailand’s second queen, as the king and the consort were spotted wearing matching blue coats during a performance of Buddhist rituals.

But Queen Suthida has now reportedly re-emerged in public, as she was photographed alongside her King husband during a Chinese New Year celebration last week, the Daily Star claims.

A person holds a portrait of Thailand’s King Maha Vajiralongkorn, as royalists wait for the arrival of royal couple, in Bangkok, Thailand, November 25, 2020

It’s very difficult to say anything with confidence about what is going on in the Thai palace apart from bits of information officially released to the media, as Thailand heavily punishes any criticisms of the royal family with prison sentences.

Three months later, however, Sineenat was stripped of all her titles and ranks, including Major General. The palace stated that she was “disloyal” to the royal family and displayed “disobedience against the king and the queen” with “ambition” to match the status of Queen Suthida.

Sineenat was purged from the court and reportedly sent to jail.

But Koi raised many eyebrows again when she made her way back to the court in the end of summer 2020, as the palace announced that all her titles will be resorted and no record would reflect that she has ever been out of favour.

That was a time where nearly 1,500 private photos showing Sineenat in quite compromising positions, some topless or in her night gowns, were sent to foreign journalists or leaked online. The palace has mainly ignored the scandal in the media as Koi eventually assumed some of the roles traditionally enjoyed by the queen, leading to even further speculations about her status in the royal family.

According to ex-Thai diplomat Pavin Chachavalpongpun, “Sineenat has got a hold of the King’s heart.”