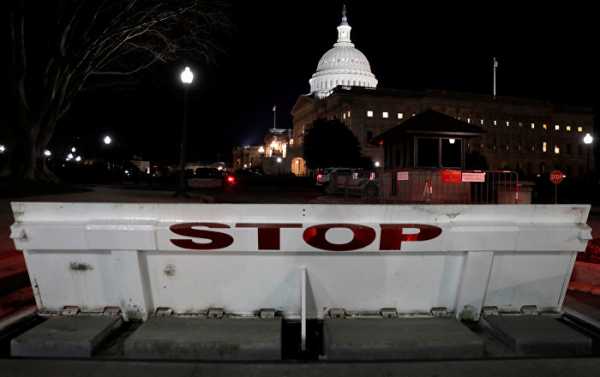 WASHINGTON (Sputnik) – US President Donald Trump submitted a $4.4 trillion budget proposal to Congress that calls for increasing defense expenditures significantly, reducing diplomatic spending, and cutting funding for healthcare and other social programs, which triggered a backlash from Democrats and Republicans alike.

The White House released the Trump Administration’s budget proposal for fiscal year 2019 on Monday which included requests for $688 billion in military funding, an $80 billion boost or 13 percent increase over the previous year. The proposal will also include requests for bolstering border security and immigration enforcement among other measures.

“The Budget reflects our commitment to the safety, prosperity, and security of the American people,” Trump said in a letter addressed to the US Congress that accompanied the proposal. “It is now up to the Congress to act.”

Trump’s budget proposal includes requests for significant levels of military aid to allies from Israel to Ukraine including funding for major defense initiatives to counter so-called Russian aggression and enhance the competitive edge over Moscow and Beijing.

“Trump sent Congress a proposed Fiscal Year (FY) 2019 budget request of $716 billion for national security, $686 billion of which is for the Department of Defense,” the proposal said. “The NDS [National Defense Strategy] prioritizes … reversing the erosion of the US military advantage in relation to China and Russia.”

The US budget requests $250 million to help Ukraine “protect its territorial sovereignty,” while the administration is also asking Congress to authorize $6.3 billion for the Defense Department’s European Deterrence Initiative (EDI).

Kiev will also receive $145 million to support to fight corruption and $20 million to obtain critically needed military equipment, the State Department said in a Congressional Budget Justification released on Monday.

The Trump administration also requested more than $3 billion to modernize Israel’s defense forces and provide for the acquisition of US-origin weaponry, according to the proposal document, and about $1.3 billion for Egypt.

“These funds will support the procurement of US defense articles, services, training, and sustainment focused on building Egypt’s air, ground, and maritime capabilities,” the document said.

Not all so-called allies will be happy with the latest budget proposal, including Islamabad, which has been the target of US frustration over counterterror efforts. US assistance to Pakistan will be cut by some $10 million.

In addition, Trump wants to spend $24 billion dollars to modernize the US nuclear program in line with the recent Nuclear Posture Review.

The military looks to spend around $10.7 billion for F-35 joint strike fighters and $2.3 billion for B-21 long range strike bombers, according to the proposal.

In terms of the war on terror, Pentagon officials told reporters during a conference call that the military asked that $1.4 billion in funding be allocated in the fiscal year 2019 US budget to train and equip Iraqi Security Forces and vetted Syrian opposition.

Other security-related spending came in the area of immigration enforcement and Trump tries to follow through on his previous commitments on strengthening the borders, including the great wall to block illegal immigration from Mexico.

“As part of the Administration’s proposal for $18 billion to fund the border wall, the Budget requests $1.6 billion to construct approximately 65 miles of border wall in south Texas,” the document said.

The White House also proposed to suspend direct federal funding for the International Space Station by 2025 and give $150 million to a program for boosting commercial development of capabilities of the National Aeronautics and Space Administration (NASA), according to the budget document.

While the Trump administration proposed to boost military spending by some 13 percent it also called for materially reducing the State Department budget.

The White House budget proposal allocates $39.3 billion for the Department of State foreign and civil service employees and USAID, which is down from approximately $55 billion, representing a nearly 30 percent reduction.

However, House Foreign Affairs committee chairman Ed Royce in a press release on Monday said a strong bipartisan coalition in US Congress is ready to act against Trump’s proposed State Department budget cuts.

Diplomacy, the Republican congressman said, helps keep the United States strong and US troops out of combat.

US Senator Patrick Leahy slammed the White House for making the decision to cut State Department funding “without any credible analysis” of the impact on US national interests.

“[T]here is no fiscal, strategic, or pragmatic justification for these arbitrary cuts,” Leahy said. “It is divorced from America’s real-world security interests, and it would continue the Trump Administration’s full-on retreat from American global leadership.”

Part of the funding the State Department does receive will go to the Broadcasting Board of Governors (BBG) to counter Russia and enhance programming for North Korea, a Congressional Budget Justification released by the US Department of State said on Monday.

Presidential budgets that are submitted yearly rarely escape criticism from Congress and Trump’s $4.4 trillion spending plan drew criticism from both sides of the aisle.

US House Minority Leader Nancy Pelosi went on the attack in the wake of the budget release, maligning the Trump administration for falling short on promises to build infrastructure while boosting corporate profits.

“The Trump plan is to raise tolls on commuters, increase the burden on cities and states, sell our essential infrastructure to the whims of Wall Street, and yank away the protections that keep consumers safe and our air and water clean,” Pelosi said in a press release on Monday.

US Senator Bernie Sanders was also very disappointed in Trump’s budget proposal, accusing the president of breaking campaign vows not to touch healthcare plans called Medicare and Medicaid, which provide aid to the elderly and poor, and Social Security – the US pension system for providing aid to senior citizens and retirees.

“If you were wondering how Trump plans to pay for his tax cuts for billionaires and corporations, now you know: with $1.8 trillion in cuts to Medicare, Medicaid and Social Security,” Sanders said in a Twitter post.

Russia Ready to Join Efforts With US Against COVID-19, Share Vaccine – Ambassador

US Blocks China Cotton at Border Claiming Use of Convict Labor