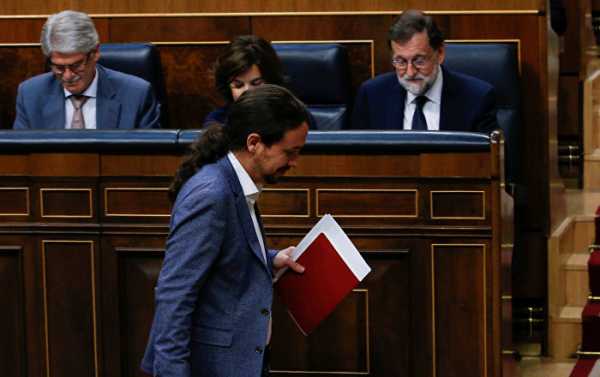 MADRID (Sputnik) – Spanish Prime Minister Mariano Rajoy has urged the Catalan authorities to form a viable government that would abide by the law and work toward restoring a legal institutional framework in the country.

“I hope that a [new Catalan] government will be in place soon, I insist [that it should be] a viable one. A government that obeys the law and will hold negotiations with us, and will work on restoring a normal political and institutional situation in our country,” Rajoy said.

Madrid is ready to enter into a dialogue with the new Catalan authorities, Rajoy noted, while stressing that, to this end, the Catalan side should abide by the law and restore a normal institutional framework.

“The government, for its part, will do utmost [to maintain a dialogue] and, I hope, other sides will also honor their obligations. But in the country, which is part of the European Union, and one of the leading countries in the world, one must obey the law. The law is binding for all of us,” Rajoy pointed out.

The appointments in the regional government have become another sticking point in relations between Madrid and Barcelona, with the former qualifying the decision to give individuals who are “evading justice” or are currently in pre-trial detention the government posts as a “provocation.” The Spanish government also characterized Torra’s declared intention to conduct a dialogue with Madrid “insincere.”

Following the appointment, Madrid also stated that the Spanish government was the only eligible body to authorize the issuance of a decree on government appointments, and would analyze the relevant document published by the Catalan authorities.

On May 19, newly-elected Catalan president Quim Torra began forming a government. Government posts were mainly given to former advisers of his predecessor Carles Puigdemont, two of whom are currently in pre-trial detention in Madrid, and two others are in exile in Belgium. The politicians are facing charges related to the October 1 independence referendum.

Last week, the Catalan Parliament elected Torra, a lawmaker from Junts per Catalunya party, as the president of the autonomous region. He took an oath last Thursday but did not swear allegiance to both the Spanish king and the constitution. Torra calls himself an interim head of the Catalan government as he considers Puigdemont a true leader of the cabinet.

On October 1, Catalonia held an independence referendum, which was not recognized by the central authorities. The results showed that the majority of Catalans supported secession, and the regional parliament unilaterally announced independence later in October. In response, Madrid imposed direct rule over the autonomous region, dissolved the Catalan parliament and called a snap election. Several pro-independence leaders were jailed, while others, including Puigdemont, fled the country.