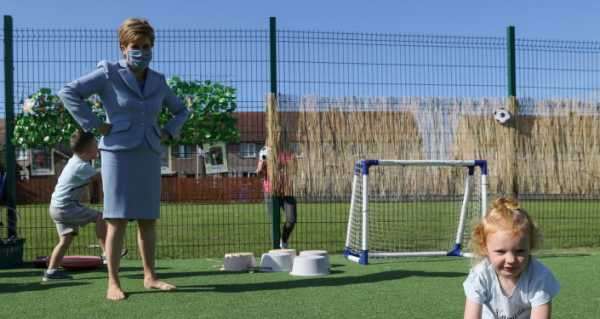 Scotland, Wales and Northern Ireland have devolved powers over healthcare, among other issues, and drew up their own rules in response to the coronavirus pandemic independently from the Westminster government.

Those powers are set to expire in March 2022, but the regional Holyrood parliament — in which the SNP holds a majority and enjoys the support of the small Scottish Green Party — has the power to extend them.

Swinney said that while the pandemic had been “incredibly disruptive”, it was also “driving the pace of digital adoption, and in some cases more efficient ways of working”.

He called the exit from the lockdown “a unique opportunity to reimagine how health and social care, learning and justice services can be designed and delivered”.

Scotland, Wales and Northern Ireland have devolved powers over healthcare, among other issues, and drew up their own rules in response to the coronavirus pandemic independently from the Conservative Party national government. Scotland and Wales both attempted to prevent people crossing their figurative ‘borders’ with England at several times since March 2020.

Early in the pandemic, 348 prisoners were released up to 90 days early from prison — although those convicted of ‘COVID-related’ offences were excluded from that privilege. Former UK ambassador to Uzbekistan Craig Murray, who was jailed for reporting on the government’s failed attempt to jail former SNP leader Alex Salmond for rape, was this month denied early release on the grounds that he is was convicted of a civil offence and not a criminal one.

The consultation will end on November 9.