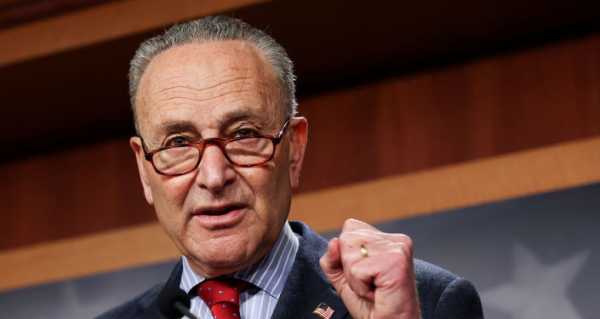 After years of unsuccessful attempts, Schumer’s home state of New York approved marijuana medical and recreational use for adults earlier this week. According to the media, more than 40% of Americans now live in states that have fully legalized marijuana.

Senate Majority Leader Democrat Chuck Schumer of New York has pledged to move ahead with legislation to legalize marijuana on a federal level, even if President Joe Biden opposes it, Politico reported on Saturday.

On the marijuana legalization issue, the president has become a notable outlier among Democrats. Schumer said in an interview with the outlet that he “will have an ongoing conversation” with Biden about cannabis legalization to “tell him how my views have evolved.”

However, Schumer is quoted in the report as claiming that Biden’s hesitancy would not stop the Senate from acting to relax federal restrictions.

Although Schumer was originally opposed to federal marijuana legalization, his “thinking evolved,” and in 2018, he became “the first member of the Democratic leadership to come out in support of ending the federal prohibition.”

“When a few of the early states — Oregon and Colorado — wanted to legalize, all the opponents talked about the parade of horribles: Crime would go up. Drug use would go up. Everything bad would happen,” the Senate Democratic leader explained.

According to The Hill’s report, the campaign for federal cannabis legalization comes as Biden faces pressure to reverse his administration’s employee policy on past drug use, which resulted in the firing of five staffers.

Last week, a coalition of 30 Democratic lawmakers reportedly signed a letter to Biden urging him to “clarify your employment suitability policies, remove past cannabis use as a potential disqualifier, and apply these policies with consistency and fairness.”

According to a Gallup poll conducted in November 2020, 68% of Americans support legalization, the highest level ever reported by Gallup on the subject.