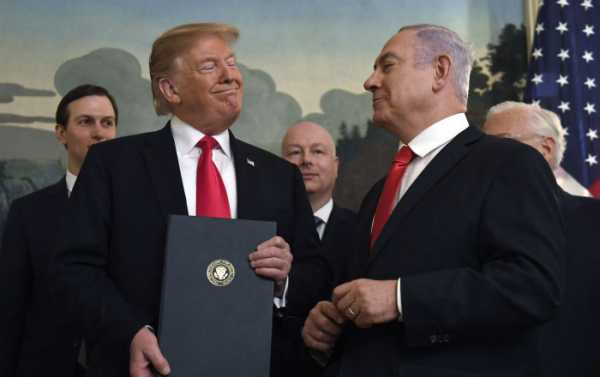 The long awaited publication of Trump’s peace plan for the Israeli-Palestinian conflict might not be met with global praise, since many countries and even Palestinian National Authority (PNA), one of the key parties to the conflict, have cast doubt on how balanced and non-biased the deal will be.

The “deal of the century” peace plan was announced by US President Donald Trump years ago, but yet very little is known of its contents, apart from the economic portion and various media reports, which POTUS has labelled as “purely speculative”. The situation is, however, bound to change as President Trump recently promised to release it in full ahead of his meeting with Israeli Prime Minister Benjamin Netanyahu and his political rival Benny Gantz in Washington on 28 January.

What is known for sure is that the US wants to offer PNA a “peace to prosperity” plan, where Palestinians will be incentivised to take the peace offering in exchange for massive investments in the PNA’s economy that, in Washington’s view, will lead them to economic success.

The deal will suggest investing a whopping $50 billion in the Palestinian territories as well as in neighbouring Egypt, Lebanon and Jordan over 10 years to stimulate the local economies. Additionally, the plan envisages the construction of a transport link between the Gaza Strip and the PNA’s West Bank territories with the aid of $5 billion.

A Demonstrator holds Palestinian flag at the Israel-Gaza border fence during an anti-Israel protest, in the southern Gaza Strip December 6, 2019

At the same time, the US doesn’t plan to be the only or even the main investor, expecting mostly regional powers, as well as Europe and China, to pay their share in this investment fund. It’s unclear, however, how many of these countries are actually ready to participate in such a generous offer.

No Clarity on Two-State Solution

One of the key questions, which remains unanswered, is whether the plan includes a provision about the creation of a Palestinian state, with conflicting media reports suggesting both the presence and the absence of this crucial point.

Many reports, citing alleged leaks of drafts of the deal, claim that the deal of the century envisages the creation of a Palestinian state without its own army and with the Hamas movement being disarmed. The border security of the future state is expected to be ensured by the Israeli military, while the country itself will not be able to have its own military forces.

In addition, some reports claim that Israel will keep Jerusalem as its capital under the deal, with several of its Arab neighbourhoods going to the Palestinian authorities. The purported deal leaks also claim that Palestinians will keep roughly 80% of the West Bank, while Israel will have control over the remaining part, where the Jewish settlements are located.

What Are the Chances the Deal is Signed?

There is actually little hope that Trump’s “deal of the century” will be implemented, since even prior to the release of the economic portion of the plan, the PNA and Hamas both denounced the US’ role as a mediator, accusing it of favouring Israel. The accusations came in the light of Washington’s decision to recognise Israeli claims of Jerusalem as its capital, although Trump later clarified that Tel Aviv will have to make concessions for what it has received from the US.

A general view of The Dome of the Rock Mosque at the Al Aqsa Mosque compound, known by the Jews as the Temple Mount, is seen from the Mount of Olives in east Jerusalem. (File)

The economic part of the deal also raised eyebrows in the region, as it was sometimes perceived as an attempt to “bribe” Palestinians while refusing them statehood. It came on the backdrop of a wave of unconfirmed reports that the peace plan will not include the two-state option.

The international community in general has also not been very keen on endorsing the deal, which they haven’t seen so far, supporting the previously negotiated agreements on a two-state solution instead. Many Middle East states, including long-time US ally Saudi Arabia, vowed to support the deal if it satisfies the needs of the Palestinian people and if they find it appropriate.

The time Trump chose for announcing such a major initiative also raises questions, since Israel currently is stuck in a political stalemate due to its inability to form a new government for nearly a year. In addition, interim Prime Minister Benjamin Netanyahu is struggling to get immunity from corruption charges on three criminal cases from the country’s parliament.

Trump himself is in no better position, as Democrats are trying to remove him from office via an impeachment trial in the Republican-controlled Senate. While his chances to win the case are high due to the party’s dominance, several defectors might still turn the tide and result in his removal, which in turn puts the peace plan’s implementation into jeopardy.