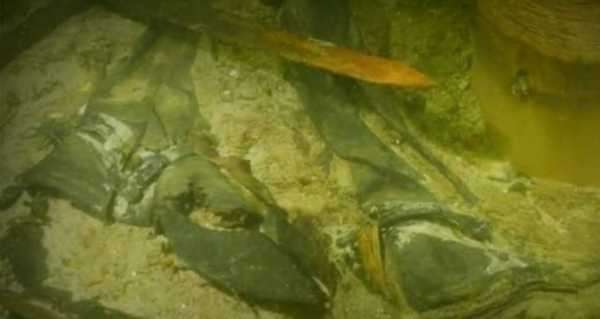 Although human burials with connections to warfare have been previously unearthed across the Baltic states, this is the first instance in which the remains of a medieval soldier have been discovered underwater in Lithuania, according to researchers.

Archaeologists recently confirmed the discovery of a medieval soldier’s remains and weaponry on the floor of Lithuania’s Lake Asveja during an underwater inspection of a wooden bridge undergoing repairs.

Elena Pranckėnaitė, a researcher with Lithuania’s Klaipėda University, told the Baltic News Service that the findings were located some 30 feet below the lake’s surface under a layer of sand and were discovered when divers were inspecting the Dubingiai bridge’s support system, which is in the process of being replaced with metal supports.

It is not believed that the individual was purposely buried in the area, but that the soldier’s body was instead covered by silt deposited onto the remains over the years. It’s unclear what caused the individual’s death.

Image taken by research team offers up-close view at the skeletal remains of a male medieval soldier. The remains were discovered during inspection dives of Lithuania’s aging, wooden Dubingiai bridge.

A team of researchers with the National Museum of Lithuania are expected to continue their analysis of the findings. Pranckėnaitė told Live Science that the team hopes to “tell the [soldier’s] story” within a year at the earliest.