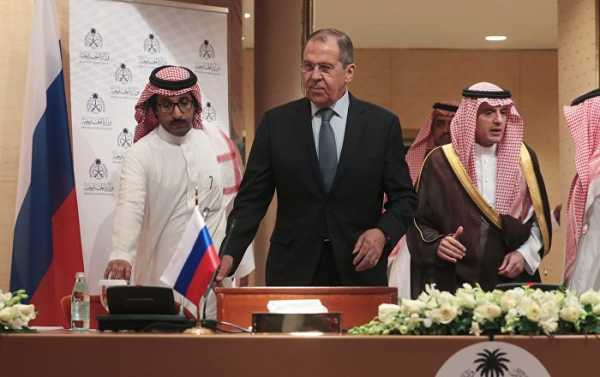 Russian foreign minister Sergey Lavrov is visiting Qatar, Saudi Arabia, Kuwait and the UAE this week. Besides bilateral ties, Lavrov and his counterparts from Gulf nations also focused on other issues, such as peace in Syria, Libya and in the Middle East.

Four key Gulf nations in just four days — It’s not an easy journey for the Russian delegation in terms of logistics, but for Sergey Lavrov this type of “3D diplomatic chess” seems to be the usual modus operandi. He met with King of Saudi Arabia Salman bin Abdulaziz Al Saud, with Sheikh Tamim bin Hamad Al Thani of Qatar, and with his counterparts responsible for the foreign policy in both countries, holding talks on economic, military, humanitarian and diplomatic issues.

Lavrov’s Gulf program, which started on March 3rd, is compressed into a series of high-level meetings, with some of them being held right next to the airfield.

​Moscow is certain that Syrian people will benefit from constitutional reform and for a long time it has been calling for the creation of a constitutional committee, which is being seen as an effective mechanism to kick-start such reform.

Middle East peace process is another topic, which was on the agenda of Lavrov’s talks in Doha and in Riyadh.

Russia’s top diplomat elaborated on his vision of the Middle East peace process during a press conference in Doha.

​While in Saudi Arabia, Lavrov once again mentioned Moscow’s mediation efforts in organizing talks between Israel and Palestine. But, according to Russia’s top diplomat, timing problems are still in the way.

“Indeed, we received a request from our Israeli leadership couple of years ago to host an Israeli-Palestinian high level meeting on Russian soil, without any prerequisites.” – Lavrov told journalists – “Palestinian leadership is ready for such meeting. Israeli leadership has confirmed its readiness, but has not confirmed a concrete date. We will be ready to host such a meeting initiated by Israeli colleagues once there will be agreement on particular time frame.”

On Wednesday Sergey Lavrov will hold a series of meetings with top officials in Kuwait, before traveling to Abu Dhabi, which will become the 4th destination of his Persian Gulf tour.