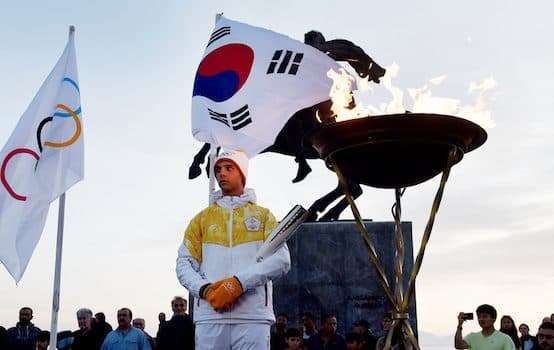 Imagine this: In a little over two weeks from now, the world will be spellbound by a small group of athletes from North Korea walking side-by-side with their estranged brethren from the south during the opening ceremonies of the Winter Olympics in Pyeongchang, South Korea. We will marvel at how normal they appear, how photogenic, indeed, how they look just like us. We will ask questions like: how could they come from such a terrible nation? Talking heads will say things like: this is a signal that Kim Jong-un really wants peace and that we can come to a deal over his nuclear and missile programs. Some will go so far as to declare that peace is at hand—even though the Korean War never really ended in the first place.

We will say those things and we will have been had. Willingly.

You see, this is exactly what North Korea—the only nation on planet Earth that still operates gulags and starves its own people to field a massive military machine from an economy the size of Vermont—wants you to believe. They want you to think they are embracing détente but really they have no such designs. This is all nothing more than a trap. A ruse. A Trojan horse with a nuclear trigger, all designed to give North Korea more time to get to the only thing it really does want: a nuclear weapon that could hit the American homeland and deter any thoughts of a U.S.-led invasion or some other form of regime change.

Why are we falling so willingly for such a scam? Or maybe a better question is: Why is South Korea going along with such an obvious deception? To put it simply: the south—and indeed the world—has no choice. With Seoul investing $10 billion on the games and billions more spent on TV contracts and corporate sponsorships, it would take very little for Pyongyang to destroy the Olympics’ commercial viability. All that would need to happen is for one nuclear or missile test a few days before or a cyber-attack during the opening ceremonies and countless tourists would cancel their plans to attend, turning the narrative from sports to possible conflict—and North Korea wins. So when Kim Jong-un in his January 1 speech outlined the possibility of joining the games, Seoul’s leadership took them up on it, as they knew what could happen if they didn’t. We should see such actions for what they are: a carefully crafted bribe.

It’s what happens after the Olympics and the Paralympics in March that will really matter. If I am right, North and South Korea will continue to negotiate on a great many issues after the games are over. Both sides will discuss joint commercial ventures, the reunification of families could very well occur, and there could even be floated the possibility of a summit between Kim Jong-un and South Korea’s leadership. Seoul will try repeatedly to bring up the nuclear issue, and Pyongyang will continue to say that is a matter between North Korea and America—a preview of what is to come.

And then the calendar—and North Korea’s plans that were crafted long ago—will destroy this carefully crafted mirage. As we move into April, Pyongyang will harden its stance across the board. They will fly into their usual fits of rage over the now-delayed U.S.-South Korean joint military exercise. Kim’s negotiating team will demand such maneuvers, now set for towards the end of the month, be canceled permanently or their own talks will be called off. South Korea most likely will not cave to such a demand and decline such an ask, setting up the north’s storming out of the talks—and the death of this short-lived détente, all according to Pyongyang’s plan.

What happens next is easy to see. Now that spring has arrived, we’ll have entered one of North Korea’s favorite times for testing missiles. Before America and South Korea begin their exercises in late April, Kim will surely test-fire an assortment of ordnance, perhaps even nuclear weapons. But the one test we all need to watch out for is a long-range missile test like no other: an ICBM that is fired not just in a lofted, or near-up-and-down, trajectory as happened last year, but one that is fired a full 13,000 kilometers into the South Pacific. If that happens, we will get word that a dummy warhead splashed down into the ocean—the last thing North Korea needs to turn Los Angeles into atomic rubble.

From here on, your guess is as good as mine as to what happens. With recent comments from Senators Marco Rubio and Lindsey Graham stipulating that such a weapon can never be allowed, it seems military action would be unavoidable. And yet, with armed intervention coming at what could be a tremendous cost—like the vaporization of hundreds of thousands of Americans from a nuclear strike and millions more of our allies in Northeast Asia—the Trump administration could finally embrace containment and deterrence, even if begrudgingly.

Enjoy the Olympic games for what they are, a mere respite for what is to come. Just don’t say you weren’t warned.

Harry J. Kazianis (@grecianformula) is director of defense studies at the Center for the National Interest and executive editor of its publishing arm, The National Interest. Previously, he led the foreign policy communications efforts of the Heritage Foundation, served as editor-in-chief of The Diplomat, and as a fellow at CSIS:PACNET. The views expressed are his own.