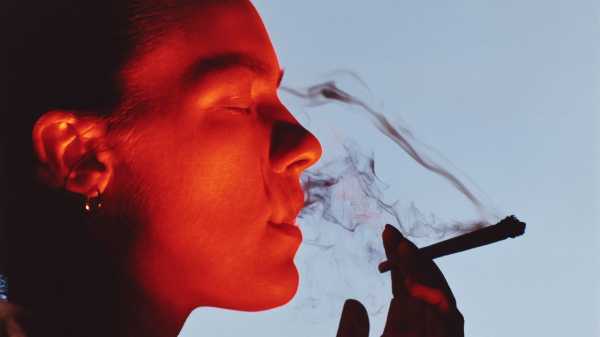 By the time recreational marijuana usage became legal in California, on New Year’s Day, the government’s official permission seemed, for many Californians, like a belated, nearly irrelevant formality. Twenty-two years of ready access to medical marijuana had made casual consumption—a pull off a vape pen on the walk to dinner, post-prandial pot chocolates circulating in the living room, a THC strip tucked under the tongue—no more remarkable than an aperitif. Actually, less remarkable than a drink, because everyone knows that alcohol is bad for you (kills your stem cells, gives you cancer, makes you grouchy, paunchy, gray), whereas, increasingly, the industry is equating conscious marijuana use with sublime good health.

In the state of California, in recent years, hundreds of people—disproportionately people of color—have been arrested or jailed on marijuana-related charges. (Under a provision in the state's marijuana law, Prop 64, many may be able to have their sentences reduced or convictions overturned.) But among an affluent demographic of Californians—heavily invested in optimizing personal experience, micro-regulating moods and appetites, states of pain and creative flow—cannabis is part of a booming wellness industry. Gone are the purple bongs, sexy nurses, dancing bears. In place of these skanky, skunky holdovers is an array of alluring products whose seduction lies in their eminently rational design. Dosist, formerly Hmblt (motto: “delivering health and happiness”), has released a collection of disposable vape pens preloaded with marijuana concentrate (available individually or in a gift set) targeting different desired states: bliss, calm, relief, and so on. The pen itself, Cupertino white and tampon-esque, vibrates when its user has inhaled 2.25 milligrams of THC. Marijuana, in this new form, is a therapeutic aid in the life of an active, productive professional—like fish oil, with better dreams. The new consumer (or the old consumer, reimagined) is not zonked in a La-Z-Boy watching “Wayne’s World” with a bag of chips. She is making a vision board for the startup she’s launching, lightly high on a strain promising to connect her to her intuition without stimulating binge-eating.

A CBD-infused gummy from Lord Jones.

Colorado legalized recreational marijuana in 2014. This past fall, after a spate of accidental overdoses, the state banned pot gummy bears and other shapes alluring to children. California learned from Colorado’s mistake; California regulations prohibit animal- and fruit-shaped edibles. At the edibles brand Lord Jones—the brain child of a marketing executive who popularized Lärabar, the nutrition-bar company, with the goal of “making good nutrition relevant and chic”—small-batch, high-potency confections are presented in luxurious boxes lined with golden foil and stamped with a heraldic crest. Think gold-tipped pastel-colored cocktail cigarettes, fancy candies, and, in the case of these CBD-heavy gummies, a “body high” that doesn’t affect cognition.

A CBD cocktail at an Altered Plates party in Los Angeles.

The chef Holden Jagger, of the events company Altered Plates, considers marijuana a vegetable—from the pollen to the male plants, which he pickles, to the dehydrated leaves. He makes a cannabis rub for tri-tip, togarashi cannabis chips, and a medicated chimichurri. At a recent cocktail party in Los Angeles, he served his guests a non-alcoholic cocktail made from coconut water, lemon juice, and simple syrup infused with CBD, a non-psychoactive cannabis compound with anti-inflammatory properties available at juice bars and coffee shops around the state.

“I have a rough day at work and pour myself a finger of my favorite single-malt Scotch,” a canna-businessman told me. “I’m self-medicating. How is that any different from using cannabis?”

A joint-rolling machine at the facility, made by the Dutch company Futurola. The company recently upgraded to a higher-capacity machine to meet demand.

California is the country’s largest legal marketplace for pot. Governor Jerry Brown’s latest budget anticipates six hundred and forty-three million dollars in tax revenue in the first full year of legalization; a study by the agricultural school at University of California, Davis, predicts five billion dollars in annual sales, on par with beer sales in the state. In North America at large, according to the research firm Arcview Group, sales of legal marijuana are expected to reach twenty-three billion dollars by 2021.

Historically, California’s marijuana industry was based in the Emerald Triangle formed by the northern counties of Humboldt, Mendocino, and Trinity. Humboldt Legends, a group of “heritage” cannabis farmers in Humboldt County, piloted a “track and trace” program, using QR codes and a Swiss security company, to bring transparency to the supply chain in anticipation of regulations that would accompany legalization. Among their products is live resin, created by freezing flowers within half an hour of harvest to preserve the intensity of aromatic terpenes and lead to a more potent psychoactive experience.

The some thirty farms that sell under the Humboldt Legends name subscribe to environmentally sustainable cultivation practices. Under the regulations laid out by California’s Bureau of Cannabis Control, marijuana sold in the state must be lab-tested for pesticides, heavy metals, solvents, mycotoxins, and other impurities. Products will be labelled according to cannabinoid concentration and monitored for consistency.

Lori Ajax, California’s marijuana czar, is tasked with bringing the industry out of the shadows.

Lori Ajax runs the Bureau of Cannabis Control, a new regulatory agency overseeing medical and recreational marijuana licensing. Republican, cannabis-naïve, and a veteran of the Department of Alcoholic Beverage Control, Ajax told me, “I came on my post in late February, bureau of one.” Ajax, who went on a learning tour, visiting growers, dispensaries, and factories, is tasked with bringing the industry out of the shadows.

In recent years, as the state has prepared for legalization—which passed by ballot measure in November, 2016—numerous businesses focussing on marijuana distribution have emerged. California rules dictate that distributors, which deal with transportation, quality control, and tax collection, get licensed. One question that keeps Ajax up at night: Is the distribution infrastructure robust enough to keep the product flowing to the retail stores?

The future of cannabis is female: the business, which is unusually open to female entrepreneurs, has begun catering to female consumers.

A harvested stalk of Headband at Full Moon Farms, in Dinsmore, California. According to Leafly, an online resource for pot research, Headband is the “love-child of cannabis’ power couple, OG Kush and Sour Diesel,” known to promote relaxation and alleviate stress.

Workers at Winterbourne Farms inspect Jack Herer, a spicy, earthy strain whose aroma is reminiscent of wood floors and lemon zest, before a harvest. Leafly describes Jack Herer, which is also known as “writer’s weed,” as making users feel “blissful, clear-headed, and creative.”

An Eaze employee at the company’s headquarters, in San Francisco’s financial district.

Eaze, a San Francisco-based tech company that provides delivery-service technology to dispensaries, tracks cannabis use across its markets. Flowers are down; vape pens are up. In 2016, the number of women using Eaze went up thirty-two per cent. The company reports that “the modern marijuana consumer spends more on cannabis per year than the average American spends on personal care, alcohol, and tobacco combined.” According to the same study, thirteen per cent of female Californian weed users surveyed had stopped drinking entirely, replacing alcohol with cannabis.

The Los Angeles dispensary Med Men distributes “Cannabis 101: A Practical Guide for the New Consumer.” On the first day of legalization, the line extended two blocks out the door. Customers entering the store must show I.D., proving that they are at least twenty-one years old. The shop, airy and open, with large glass windows and walnut cabinetry, is reminiscent of a high-end makeup store. It was designed specifically to counteract the image of the head shop, with barred windows and a waiting area presided over by an armed guard.

Med Men, which has expanded to Nevada and New York (where it is still medical-only), wants marijuana to be mainstream. It offers high-intensity drinks, for medical patients only; topical creams for aging athletes; cannabis for dogs. A few weeks ago, the company launched a half-million-dollar billboard campaign. The ads don’t show joints, plants, edibles, or bongs, but they don’t have to. “Mom, is that for pot?” my friend’s twelve-year-old son asked as they passed a sign. He knew.

At Altered Plates, multi-course meals, paired with joints selected for their flavors and flavor-enhancing profiles, aim to cultivate élite pot consumers and educate a class of connoisseurs.

On January 4th, Attorney General Jeff Sessions issued a memo reversing the Obama-era instructions to prosecutors and law enforcement not to interfere with the marijuana business in states where it is legal. California Democratic Lieutenant Governor Gavin Newsom joined Cory Gardner, a Republican senator from Colorado, in condemning Sessions’s move, saying that it infringes on states’ rights and jeopardizes a thriving and lucrative industry and a valuable new tax stream.

A new campaign by the California Highway Patrol features signs announcing, “Drive High, Get a D.U.I.”