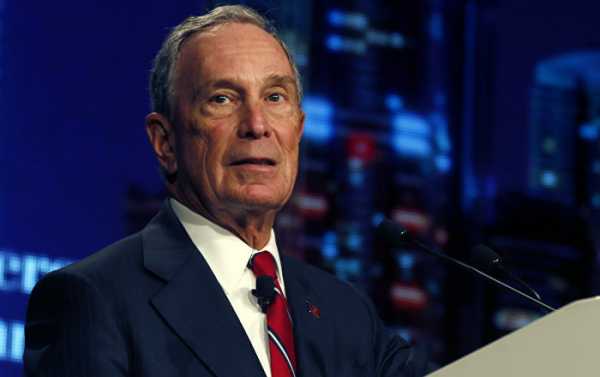 The former long-serving mayor of New York City, whose net worth exceeds $50 billion, was listed as a POTUS candidate by the Federal Election Commission earlier this week, although the media tycoon has yet to make a first-hand announcement.

Michael Bloomberg will not accept political donations if he runs for president and will refuse a presidential salary if he wins, senior aides claimed Saturday as the political world awaits the now-Democrat’s 2020 announcement.

He insisted Bloomberg would work for only $1 a year as head of state, citing his over a decade-long tenure as New York City mayor.

Bloomberg “is wholly independent of special interests, will not take a dime in any contribution, and never has in any of his three races”, Wolfson said.

Speaking on where the finances may potentially come from, he claimed there is only one source – his own pocket. When asked about the amount he is keen to spend, the aide dropped: “whatever it takes to defeat Donald Trump”.

The Bloomberg team contends that his wealth allows him to be more responsive to people’s everyday concerns because he isn’t lobbying for anyone’s special commercial interests.

He earlier cited Bloomberg as saying that no Democratic candidate currently running is capable of beating Trump in next year’s vote.

Bloomberg’s stance on money and presidential campaign spending is notably similar to one Trump was known for during his 2016 campaign. Although he ultimately started accepting donations, he has since been regularly earmarking his salary for different departments of the federal government.

Campaign Up and Running

Despite his formal announcement being put on hold and Federal Election Commission (FEC) files naming him as a candidate only this week, Bloomberg appears to have already been putting much effort into a struggle for the electorate. For instance, in recent days, he has created a presidential campaign committee with the Federal Election Commission and qualified for the primary ballot in at least three states. Separately, Bloomberg’s team has reportedly thrust more than $30 million into television ads set to begin running this Sunday in a number of primary states.

The latter, first reported by The New York Times, has struck a nerve with Bloomberg’s Democratic rivals, with many finding fault with his ignorance of a grassroots campaign:

“If you can’t build grassroots support for your candidacy, you have no business running for president”, he noted.

Another Democratic candidate, Minnesota Sen. Amy Klobuchar, also took aim at Bloomberg, as she campaigned over the weekend in New Hampshire, one of the first states on the primary schedule, bypassed by Bloomberg to put a greater focus on others: