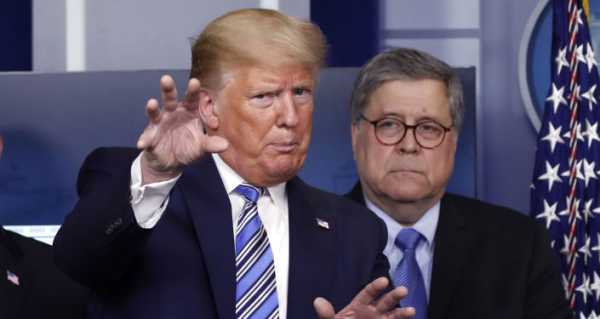 Relations between Donald Trump and William Barr began to go south in August 2020, when the then-head of the US Justice Department reportedly ignored the president’s order to boost the use of force against Black Lives Matter protesters.

Former Attorney General William Barr used obscenities in December, when he questioned claims by POTUS that the 3 November presidential election was stolen from him, the US news outlet Axios reports.

During the 1 December meeting in the White House, Barr reportedly said that “these things aren’t panning out”, referring to the Justice Department looking at the voter fraud allegations Trump’s lawyers had claimed.

The head of the Justice Department then ostensibly went even further by claiming, “I’m a pretty informed legal observer and I can’t f*****g figure out what the theory is here. It’s just scattershot. It’s all over the hill and gone”.

The alleged developments were followed by Trump announcing a few weeks later that Barr would leave office before Christmas, a move that came as the attorney general praised the US president in his resignation letter, shared on Twitter by POTUS.

In the letter, Barr specifically pointed out that felt “proud to have played a role in the many successes and unprecedented achievements you [Trump] have delivered for the American people”.

Trump responded in kind at the time, tweeting about “a very nice meeting” with Barr in the White House shortly before the latter’s resignation, and adding, “our relationship has been a very good one, he has done an outstanding job!”

Relations between the two started to turn sour in August 2020, when POTUS told Barr to ramp up a show of strength in Portland against Black Lives Matter protests. With the attorney general showing no signs of agreeing, Trump reportedly slammed his fist on his desk and yelled “No one supports me. No one gives me any f****** support”.

It was the 1 December White House meeting that further added fuel to the fire of mutual anomosity, which was preceded by Barr’s interview with the AP news agency pertaining to the head of the Justice Department’s thoughts about Trump’s “voter fraud” claims.

“We have not seen fraud on a scale that could have effected a different outcome in the election”, then-Attorney General Barr told AP, among other things.

Barr was previously believed to be one of the most loyal members of the Trump administration, presenting, in particular, the release of the Mueller Report about alleged Russian interference in the 2016 US election. The probe found there was no collusion between POTUS and Russian officials.