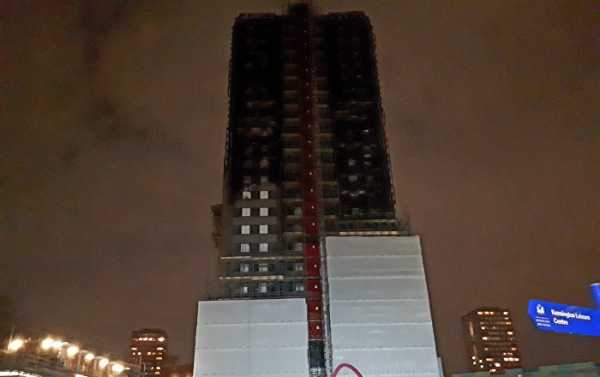 Eight months after an inferno claimed the lives of 70 people and an unborn baby at a tower block in west London, nobody has been arrested. Fresh calls for “justice” were made at a public meeting in the shadow of the tower.

Matt Wrack, the general secretary of the Fire Brigades Union, said the “big criminals, and not just the little criminals” needed to be brought to justice.

“Because this was a crime. This was an atrocity. It wasn’t an atrocity caused by war or terrorism. If it had been war or terrorism I think the reaction would have been different. This is people who were killed in their own home and questions have to be asked about how and why that happened,” said Mr. Wrack. 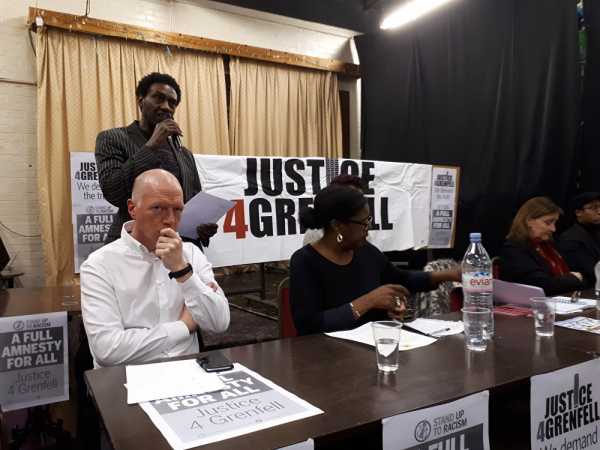 FBU leader Matt Wrack (seated, far left) listens as a resident reads out the names of the Grenfell Tower victims

The fire, believed to have been caused by a faulty freezer, broke out in the early hours of June 14, 2017 and spread rapidly throughout the 23 story tower block, trapping many residents on the upper floors.

The rapid spread of the blaze has been attributed to flammable cladding which was fitted to the side of the building during a refurbishment. Reports have suggested it was chosen over an inflammable alternative because it was a few thousand pounds cheaper.

Mr. Wrack read out an excerpt from a meeting in the House of Commons in 1999, when the FBU warned about the risk from flammable cladding after a man — William Linton — died at a fire in Garnock Court in Irvine, Scotland.

Changes to the Law Only in Scotland

The fire led to changes in building regulations in Scotland in 2005 which made it mandatory for builders to ensure any external cladding “inhibited” fire spreading but no such change was made in England, leading inevitably to the deaths at Grenfell.

He said time and time again recommendations were made by inquests and public inquiries but were not followed through by the politicans.

“So when it comes back to the question of arrests let’s not just go for the little criminals, let’s go for the big criminals as well,” said Mr. Wrack.

“Questions need to be asked of the fire brigade,” admitted Mr. Wrack, including of the “stay put” policy, but he said it was based on their understanding of “compartmentation”, which is designed to restrict the spread of fire.

​”When that building (Grenfell) was built the architects built fire safety into the construction of the building. How has compartmentation…been compromised so that fire spreads beyond the original flat of origin,” said Mr. Wrack.

He also mentioned that Friday, February 2, is the anniversary of the death of two firefighters, Michael Millar, 26, and Jeff Wornham, 28, who died while tackling a fire in a tower block in Stevenage, north of London, in 2005.

Emma Dent Coad, the Labour MP for Kensington, said she was furious that 98 households from Grenfell were still waiting to be permanently rehoused despite the Prime Minister Theresa May saying, at the time of the fire, that everybody would be rehoused within three weeks.

Clarrie Mendy, who lost two cousins in the fire, said the authorities had simply waited for the “hullabaloo” to quieten down after the blaze and had then “gone back to business”.

There were angry scenes at the meeting, held only a few hundred yards away from the blackened hulk of the tower, with one resident at one point shouting at the panel: “What is this meeting about? What are we talking about? You don’t represent me.”

A number of survivors and bereaved relatives are understood to be undergoing counselling for the trauma of the night of June 14.

Call For Tower To Be Covered

Laura Sothern, a resident of North Kensington, called on the council to cover the building urgently and said the sight of it was exacerbating people’s mental health problems.

“Killing people in the tower was not enough. Now they are torturing people and people are not able to open their curtains because of the sight of the tower. How many resources are going into covering it?” she said.

In July last year promises were made to wrap the tower before the Notting Hill Carnival in August but the building remains uncovered.

“Unless we push hard for the tower to be covered we are going to get a lot of people breaking down. If they cover the tower within a reasonable time they can stay in their homes. It will help the whole of London,” Ms. Sothern told the meeting.

“It’s essentially a grave. A huge mass grave and it should be covered up,” Ms. Sothern told Sputnik later.