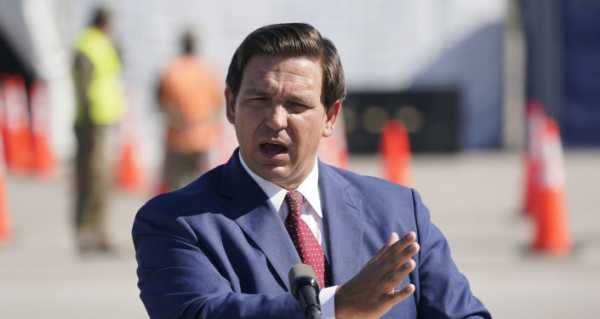 The US’ left-leaning press continues to find faults with Florida Republican Governor Ron DeSantis over his handling of COVID and the vaccine rollout despite his strategy appearing to be more successful than that of Democratic governors Gavin Newsome and Andrew Cuomo. What’s behind the media’s distaste for the “Florida man”?

Governor Ron DeSantis has crossed swords with CBS News over the latter’s “60 Minutes” story alleging that the governor provided the state’s coronavirus vaccines to rich communities and instrumentalised the coronavirus jab rollout to benefit donors.

CBS reporter Sharyn Alfonsi stated, in particular, that DeSantis granted a contract to distribute COVID-19 vaccines to Publix, the grocery store chain, which earlier made a $100,000 donation to his political action committee (PAC). The Florida governor dismissed the report as “fake narrative” while the state’s Democrat leaders are seeking a DOJ investigation into DeSantis’ alleged “favouritism.” The report prompted a wave of criticism from social media users with the hashtag #DeathSantis trending on Twitter on Monday.

​Democrat Mayor of Palm Beach County Dave Kerner and Florida’s Director of Emergency Management Jared Moskowitz also rejected CBS’ story as “intentionally false” and “utter nonsense.” The mayor said in an official statement that he specifically offered “60 Minutes” his insight into how Publix was actually picked, the broadcaster declined.

​It is not the first time that DeSantis has found himself in the cross hairs of the US mainstream media over his handling of the pandemic. Although Florida declared a state of emergency over COVID as early as on 9 March 2020, it started to gradually lift the restrictions much sooner than all the Democrat-controlled states, by opening businesses, allowing indoor restaurant dining, and getting children back to school.

On 30 March 2021, Yahoo News, Vanity Fair, and a number of other media outlets quoted the American Journal of Public Health’s report alleging that Florida had 4,924 excess deaths from March to September 2020. As of 29 March 2021, roughly 33,000 people have died from coronavirus in the state. Yahoo News insisted that the actual number of COVID fatalities could be closer to 40,000. Furthermore, the media outlet went even so far as to suggest that DeSantis may have exerted pressure on the state’s medical officials to undercount COVID deaths.

In May 2020, the US press released a story of Rebekah Jones, an “architect and manager of Florida’s COVID-19 dashboard” who stated that she had been sacked over her refusal to “manually” reduce the state’s pandemic data “to drum up support for the plan to reopen.” However, the Florida governor and his cabinet officials stated that Jones had never been the chief architect of the state’s COVID web-portal and that she had been fired for attempts to unilaterally modify the dashboard “without input or approval from the epidemiological team or her supervisors.”

Florida inoculated more than 3.3 million (or 70 percent) of the state’s elderly, aged 65 and older, by 4 April 2021, according to the Florida Department of Health. The Federalist suggests the governor’s push to prioritise seniors over all other groups helped reduce the number COVID-related deaths, even as cases nationwide begin to level off.

Lowry pointed out that not only Florida’s COVID death rate remained lower than that of New York, but DeSantis has also avoided “the educational and economic downsides of Cuomo’s policies.” However, while Cuomo’s nursing home scandal has almost faded away, the press is attacking DeSantis with all guns blazing.

DeSantis remains an “unorthodox” governor in almost every respect in the eyes of the new administration and allied Big Media. Not only did he defy Joe Biden’s calls for keeping coronavirus restrictions in place, he also banned the so-called “vaccine passports” in Florida by ruling on 2 April that “individual Covid-19 vaccination records are private health information.”

​Last week the White House signalled that it was considering a set of standards for people to prove they’ve been inoculated against Covid-19. Press Secretary Jen Psaki specified that there would be no federal mandate for this, adding that she expected the private sector to drive “a determination or development of a vaccine passport, or whatever you want to call it.”

In addition to that, the governor announced in mid-March 2021 that Florida’s schools’ curriculum would “exclude unsanctioned narratives like critical race theory and other unsubstantiated theories.” Still, it was President Joe Biden who reversed Donald Trump’s restriction on federal training advancing critical race theory and “white privilege” shortly after being sworn in.

​In February 2021, DeSantis and the state’s GOP lawmakers teamed up to condemn Big Tech as Facebook, Twitter, Amazon, Google, and Apple over censorship, de-platforming, and election interference. For years Silicon Valley giants have been banning conservative users and pundits with tacit approval from the Democratic Party. Although then President Trump had repeatedly called upon congressmen to crack down on Big Tech for censoring American right-wing voices he was eventually removed from most of the platforms himself.

Still, DeSantis’ biggest sin is, apparently, his bond with the former president. In 2018, Donald Trump endorsed DeSantis when the latter was running for governor of Florida. Currently, DeSantis is named by the mainstream press as “a keeper of Trump’s legacy” and even “Trump’s heir to the White House.”

It appears that DeSantis’ “success story” unnerves his political opponents who are trying to subject every step of the governor to scrutiny. Time will tell whether DeSantis will endure the pressure and throw his hat in the ring in 2024.

All materials on this site are taken from open sources - have a link back to the material on the Internet or sent by visitors to the site and are provided for informational purposes only. Rights to the materials belong to their owners. Administration of the site is not responsible for the content of the material. If you found materials on our website that violate copyrights belonging to you, your company or organization, please let us know.
Contact us: 1newsday.com[email protected]