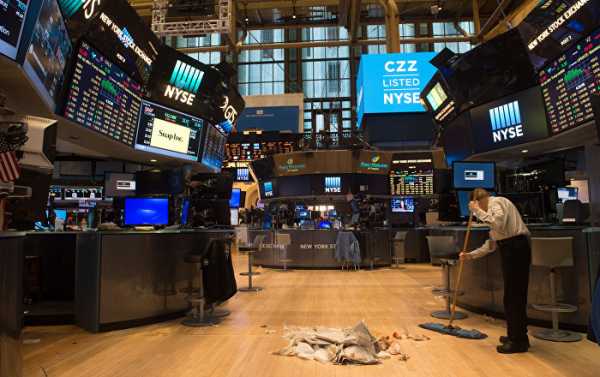 US stock market fell sharply since Friday, erasing gains of the year. The Dow Jones industrial average fell by more than four percent on Monday. The index lost 1175 points, the largest single-day points drop in history and the most substantial since 2011.

During the financial crisis of 2008, the Dow lost 7 percent of its value in a single day. In addition, the Standards and Poor 500 index and the Nasdaq both declined by around 4 percent, with the S&P 500 falling 7.8 percent.

Sputnik: We have seen drastic falls in the last couple of days after very bullish market for the last twelve months since President Trump came to power. What are the main reasons behind the falling stock market in the US?

Michael Ingram: It’s actually a combination of things. The US stock market did extremely well last year. The momentum was very strong in the first half on January 2018, so you can argue simply it had a long way to fall. And part of the reason that these stock markets had risen so strongly, particularly of course in the last quarter of last year, was because you have this tax legislation pass Congress in the US, which will in some cases significantly boost earnings of companies and also give a boost to broader economic growth.

Along with that, perhaps, comes somewhat higher inflation, and the view from the US Federal Reserve, the Central Bank is that the US economy is running close to full capacity. So if you are really adding any sort of fiscal stimulus, cutting increasing budget deficits etc., that is going to sip through in a fairly meaningful way into inflation. And what you also saw rigging the last quarter of last year and very much accelerating into 2018 was arising bond deals. To some extent, the stock market shrugged that off, certainly in the early part of January and continued rising, but it was like a delayed reaction.

There is number of things that may have triggered these falls that we have seen over the last couple of days. One is that early in the earning season we have had some disappointing results from such index heavyweights as Microsoft, Google and Apple. So that certainly ran some alarm bells. And then just on Friday you did have an unexpectedly big increase in wage inflation in the month of January within the nonfarm payrolls data. I think it did catch a lot of people by surprise.

​One of the issues which I probably should mention, the case in US market is an absence of real volatility, so technically speaking a lot of market participants were basically expecting that to continue during 2018, and they’ve been in a position where they had to hedge their positions quite aggressively and that also contributed to the decline in the market.

Sputnik: What consequences will this decline, if it continues, have regarding the political and economic situation in the US?

Michael Ingram: Obviously, if we continue to see the declines of the magnitude that we have seen over the last couple of days, then one might expect that to significantly impact US consumer confidence. That in terms of economic consequences, and presumably [there will be] political consequences, although I have to say, in the US the political situation is pretty noisy already, without rigging the stock market. To be frank, if it stopped Donald Trump taking credit for the stock market gains, I’d be quite happy with that.

But we have taken US markets back to more or less where they started the year. It is a big fall, but it is not huge in terms of valuation. I think the broader economic fall will be quite limited. The view at the moment is that this is a warning shot across the bows for markets.