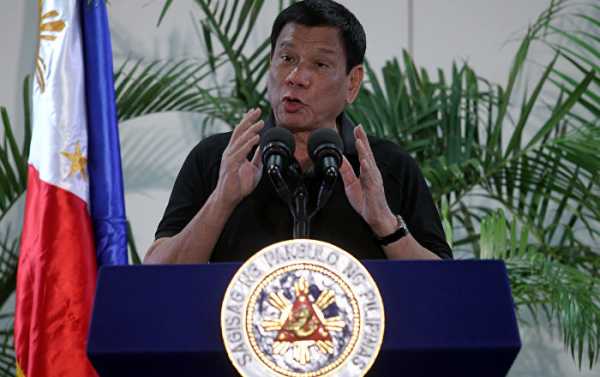 Philippine President Rodrigo Duterte joked (we think?) that Daesh’s recruitment tactic of promising virgins in heaven to martyrs was flawed because one could simply have the virgins here on Earth. Powerful argument, Roddy – how will terrorism recover?

“It is an ideology that is totally bankrupt, totally empty and the only objective there is to kill and destroy for nothing, for no reason at all,” Duterte said before an audience of Indian businessmen in New Delhi at a Manila-organized conference.

“And the come-on is if you die a martyr, you will go to heaven with 42 virgins waiting for you. Well, if I could just make it a come-on also for those who would like to go to my country. I’d like to have the virgins here, not in heaven. God may not allow it.”

The controversial president added that he was half-Muslim himself and therefore had the right to speak on the subject — although the jihadi claim is that martyrs such as suicide bombers will receive 72 virgins, not 42. What happened to the other 30? The world may never know.

Duterte also tried to convince the businessmen to invest in the Philippines — but he also warned them to steer clear of Mindanao, the Muslim-majority southern island that was ravaged in 2017 by a five month battle between the Philippine central government and Daesh.

The fighting centered in the city of Marawi and lasted from May to October. More than 1,200 casualties were reported, most of them Daesh fighters — but more than 1 million civilians were displaced and martial law was declared over the entire island and its 22 million citizens.

The martial law was set to originally last 60 days, but then it was extended to December 31, 2017. Duterte controversially extended martial law for a second time until the end of 2018.

Duterte’s speech, which secured $1.25 billion in investment pledges from the assembled business leaders, was met with domestic criticism by women’s groups who considered his comments disrespectful.

“Duterte dismisses Filipinas as mere goods for trade, that women are just sights for tourists. This insults millions of women who work hard to build our nation with honor only to be represented as a virgin fodder for tourists by the president himself,” said Filipino feminist group Akbayan Women. “Duterte’s cheap joke is extremely worrying. Duterte is an international embarrassment.”

The loose-lipped president has a reputation for off-color jokes, sometimes related to sex and rape. Infamously, in July 2017, he spoke on the subject of the death penalty for rape in The Philippines with an, uh, uncomfortable joke.

“What I don’t like are kids [being raped.] You can mess with, maybe Miss Universe. Maybe I will even congratulate you for having the balls to rape somebody when you know you are going to die,” he said.

Duterte journeyed to India to attend a summit between New Delhi and the leaders of the Association of Southeast Asian Nations (ASEAN), an organization of which the Philippines is the second-most populous and third-most prosperous member. Duterte is also to participate in celebrations of India’s Republic Day, celebrating the adoption of the Indian constitution in 1950.