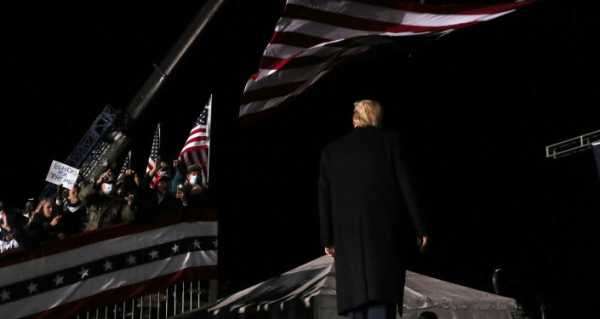 Following chaos and violence in Congress on Wednesday after Trump supporters stormed the Capitol to disrupt the certification of the Electoral College vote tally, vice president Mike Pence declared at 3:41 a.m. EST that Joe Biden had officially defeated Donald Trump in the 2020 presidential race that the sitting president had refused to concede.

Vice President Mike Pence has declared Democrat Joe Biden the winner of the 2020 presidential election in the US, after a joint session of Congress certified the Electoral College votes in the aftermath of a day marred by violence at the Capitol in Washington.

The procedure had been interrupted by the mayhem that followed a storming of the building by protesters, who had earlier converged near the White House to hear a speech by President Donald Trump. The POTUS had vowed to never concede defeat, and yet again railed against the ‘rigged’ election.

The irate protesters, many of whom shared Trump’s belief that the election had been ‘stolen’ from him, headed to the Capitol building, destroying property and disrupting the process of the vote certification. The standoff with the police that ensued resulted in at least four people being killed before the situation was brought under control, with a public emergency declared by DC Mayor Muriel Bowser for the District.

Pro-Trump protesters react amidst a cloud of tear gas during clashes with Capitol police at a rally to contest the certification of the 2020 US presidential election results by the US Congress, at the US Capitol Building in Washington, US, January 6, 2021. REUTERS/Shannon Stapleton

As Congress reconvened after the emergency recess, the Senate and the House of Representatives voted to reject an objection to Arizona’s electoral results, as well as challenges to Joe Biden’s win in Pennsylvania, setting Joe Biden, the President-elect, on course to be inaugurated on 20 January.

President Donald Trump has publicly pledged an orderly transfer of power, saying in a statement:

​Plethora of Responses to Capitol Mayhem

“The only other time in US history that the Capitol was invaded was in 1814 by the British during the War of 1812,” says Professor Thomas Sutton, a political analyst at Baldwin Wallace University in Ohio.

As the protesters who overwhelmed law enforcement on Wednesday violated federal law and the Constitution, federal law enforcement agencies such as the FBI and the Justice Department, will likely be probing the participants involved and filing charges. Leaders of the riot may face charges of incitement and fomenting insurrection and sedition, he says.

​As for Donald Trump, accused of egging the rioters on during his speech, he may face a plethora of responses, such as a vote by the Cabinet to invoke the 25th Amendment to remove him from power. This would result in Vice President Mike Pence assuming the presidency until 20 January.

Another option might be yet another impeachment by the House and trial by the Senate – that outcome would effectively bar Trump from running again for federal public office.

Donald Trump might also, according to the political analyst, receive a censure from the House and/or Senate; a prosecution for incitement after he leaves office.

Despite Trump’s assertions that he would leave office on 20 January, he may continue to seek ways to provoke his supporters to protest the election results until Biden is inaugurated, believes Professor Thomas Sutton.

This may take the form of efforts to organise an event to overshadow the swearing-in ceremony, to draw attention away from Biden and towards Trump.

“There is nothing that Trump and his supporters can do to change the outcome of the election, now that the results have been certified by Congress,” says Dr. Harvey Schantz, professor of political science at State University of New York at Plattsburgh.

Acknowledging that ‘procedurally’, there is little left for the President or his supporters to do in challenging the election outcome, Laura Wilson, Political Analyst and Political Science Professor at the University of Indianapolis, underscores that Donald Trump has an incredible rapport with his supporters.

The analyst believes that they will help Trump should he decide to run for office again.

Donald Trump’s time in office will leave the Republican Party divided between his loyal supporters and party members who denounced the refusal to accept the 2020 election results, says Professor Thomas Sutton.

As testimony to the frayed ties within the GOP, some Trump supporters are even going as far as to call for breaking with the Republicans and forming a new political party, he says.

Both the Republican Party and the Democratic Party in the US are suffering from profound divisions within their ranks, agrees Dr. Zalmay Gulzad, professor at the Political Science Department of Harold Washington College in Chicago.

He points to the fact that even Democrat Nancy Pelosi barely won the speakership because there was a lot of “opposition”.

With the situation potentially fraught with internal chaos, the US might seek to deflect attention by stirring up “problems somewhere outside of USA”, says the professor, recalling Washington’s military escapades in Vietnam, Iraq, Afghanistan.

However, Dr. Harvey Schantz, professor of political science at State University of New York at Plattsburgh, disagrees, saying that a there will be a unified government in Washington, D.C. in 2021-2022, with a Democratic Party president and Democratic majorities in both of the House and Senate.

Winning a pair of Senate runoffs in Georgia on 5 January the Democrats regained control of the US Senate. Albeit technically split 50-50 with Republicans, the Vice President-elect Kamala Harris will serve as the tie-breaker for simple majority vote.

Senator Charles Schumer of New York will become the majority leader, replacing Mitch MConnell, and the committee chairmanships will pass from Republicans to Democrats to provide Joe Biden with a “one-party control”.

The professor of political science agrees that the Republican Party now has to face its own ‘internal schism’ between the ‘established Republicans’ and the ‘Trump Republican voters’.

Looking ahead to the next presidential election in 2024, Trump supporters such as Senators Josh Hawley (Missouri) and Ted Cruz (Texas), believes analyst Thomas Sutton, will seek to display their loyalty to Trump to “gain potential support from the 74 million who voted for him”.

U.S. President Donald Trump gestures as he speaks during a rally to contest the certification of the 2020 U.S. presidential election results by the U.S. Congress, in Washington, U.S, January 6, 2021. REUTERS/Jim Bourg

“Trump has said he may run again in 2024, possibly continuing to hold public events to maintain attention to his claims that the 2020 election was fraudulent,” says the analyst.

Trump’s continued attempts to run for the presidency would be a marked departure from the usual practice, claims Dr. Harvey Schantz.

The storming of the Capitol by Trump supporters on Wednesday was a natural consequence of the flawed and unresolved electoral process, believes Sebastian Tapia, a political analyst. It was a lack of thorough investigation into Donald Trump’s claims of voter fraud that set the ‘social movement brewing’, he says.

Supporters of President Donald Trump climb the west wall of the the US Capitol on Wednesday, Jan. 6, 2021, in Washington

He underscores that the US political system is strong enough to withstand the current attempt, but a political reform is urgently needed in the US.

The storming of the Capitol by Trump protesters might inflict long-term damage to the Trump political “brand”, says Matthew Wilson, associate professor of political science at Southern Methodist University.

The analyst adds that discussions among some of Trump’s supporters about starting a third party would be the “Republicans’ worst nightmare”.

“It would virtually guarantee Democratic dominance for the foreseeable future. The challenge for Republicans going forward is to be “Trumpy” enough to keep his supporters on board, but not so “Trump” that they alienate moderate suburbanites. That’s a very fine line to walk, and it got even finer today,” concludes Matthew Wilson.