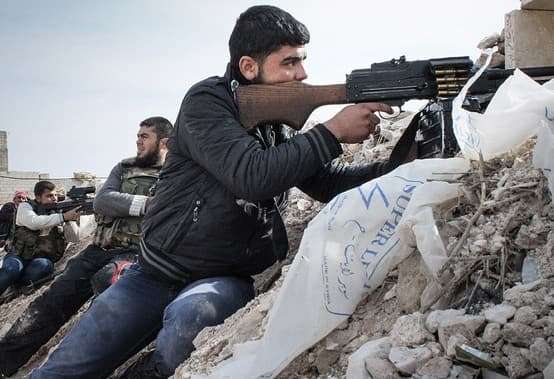 Before Iraqi and Western forces launched an offensive to liberate the city of Mosul last August, my colleague Daniel Davis traveled to northern Iraq to meet with the soldiers and commanders on the front lines. A veteran of the Gulf War and the war in Afghanistan, Retired Lieutenant Colonel Davis can smell trouble on the battlefield from a mile away. And after talking with Iraqis, Americans, and soldiers of the Kurdish peshmerga about the upcoming thrust into Iraq’s second largest city, he sensed a looming catastrophe on the horizon—one for which the United States wasn’t prepared.

“From my interviews with senior government officials, military generals, regional experts, [and] displaced persons from increasingly crowded refugee camps,” Davis wrote, “it became clear to me that winning the fight for Mosul for the anti-ISIS side is hardly assured, and even if ISIS is eventually eradicated, the absence of a unifying enemy might release pent up animosities and hatreds among current allies.”

Five months after those words were written, time has proven my colleague right not only in Iraq—which is still in the middle of a political war between the Kurdistan Regional Government and the Iraqi government in Baghdad—but also across the border in Syria. Indeed, as this piece is being written, U.S.-armed Arab fighters of the Free Syrian Army are shooting at U.S.-supported Kurdish fighters of the YPG. Turkey, a NATO ally, is threatening to annihilate the Syrian Democratic Forces, the same unit Washington has relied on as a ground army to clear the Islamic State. The U.S. has now managed to alienate the Turks on the one hand and the Syrian Kurds on the other.

As if Syria wasn’t complicated enough, Turkey’s military operation in Afrin has made the country an unsolvable enigma. And Washington—due in large part to overeagerness and short-term decision-making over realistic, long-term planning—has backed itself into a foreseeable corner and contributed to the problem.

At every stage of the conflict, Washington’s Syria policy has been reactive, influenced by the spur-of-the-moment and expansive ambitions. In more cases than not, those decisions have flooded an already tragic conflict with more weapons or brought the U.S. deeper into a contest of wills fought between the region’s major powers.

When the Syrian regime began shooting peaceful demonstrators in 2011, the clamor for Washington to intervene was deafening. When Assad began using tanks and aircraft to suppress a growing rebel revolt, representatives from the foreign policy establishment leapt onto television and begged the Obama administration to increase America’s “skin in the game.” Bills were drafted authorizing the provision of small arms and anti-tank weapons to rebel forces. Calls for a U.S.-enforced no-fly zone were made and repeated, despite very little comprehension about what such a zone would cost and how taxing it would be to the United States military.

Eventually, the Obama administration cooperated with Saudi Arabia, Turkey, and Jordan to ship weapons to the Free Syrian Army, a loose conglomeration of fighters whose goal was the toppling of the government in Damascus. The CIA ran the program, organizing and distributing weapons to anti-Assad fighters in the name of pressuring the regime to negotiate a conflict-ending settlement. And once ISIS became a higher priority, the Pentagon drew up plans to organize and vet rebel forces to fight the group—a program that had in little to no impact on the ground despite a $500 million appropriation from Congress.

Only when all of these initiatives failed did Washington throw its weight to the Syrian Democratic Forces, a Kurdish-Arab organization that cleared substantial amounts of territory from ISIS. Unfortunately, the SDF is the same group Turkey is now seeking to drive away from its border.

The costs of all this have far outweighed the benefits. Some rebel fighters trained and supplied by the United States simply surrendered to jihadist factions as soon as they crossed the Syrian-Turkish border. Some of the same weapons destined for moderate Syrian fighters were instead captured by extremist groups or diverted onto the black market and sold to far more dangerous characters.

All the while, the U.S. discounted how important Assad’s survival was to Iran and Russia and miscalculated the extent of the support Moscow and Tehran were willing to provide to keep Damascus from collapsing. Bashar al-Assad staying in the presidential palace was vastly more important to Russia’s and Iran’s objectives in the Middle East than attempts to overthrow him were to Washington. America’s ability to navigate the ever-changing waters of the Middle East is not contingent on whether Assad stays or goes—the U.S. is powerful and influential enough to continue operating in the region regardless of Assad’s political status. But the same cannot be said of Russia and Iran, two countries that view the Assad regime as an incompetent but nevertheless useful proxy to defend its vital interests.

Syria was never a crisis Washington could have (or should have) solved. With every American action, there was an opposite and unequal reaction from Moscow and Tehran, and it is the Syrian people who have paid the price. No outside power half a world away can solve Syria’s political issues. It will be for Syrians themselves to determine how they will govern what is left of their country, and neighbors with far more at stake than we have will be involved whether we like it or not.

With the war now entering its eighth year this March, the wisest course for the Trump administration is to detach itself. Nothing the United States can do will stop the conflict if the combatants and their enablers are intent on continuing it.

Daniel DePetris is a fellow at Defense Priorities.