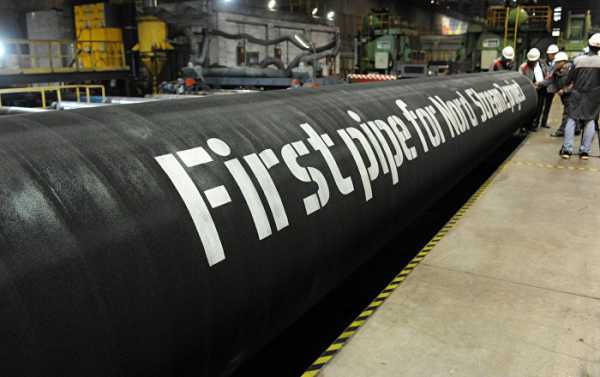 Despite opposition to the Nord Stream II pipeline from some Eastern Europe states, the consortium of energy companies involved in the joint venture are going ahead with the project.

Sputnik reporter Suliman Mulhem spoke to Christian Blex, a representative of the Alternative for Germany (AfD) Party in the Bundestag, about the proposed pipeline and the untapped potential of bilateral EU-Russia trade.

Europe’s growing demand for natural gas, coupled with falling production in many longstanding European natural gas exporters, such as Norway, has put the region on course to face an energy deficit unless it swiftly alters its energy mix or builds the necessary midstream infrastructure to import more natural gas from Russia.

A move away from natural gas is unlikely to happen, as it is unrivaled by most alternatives in terms of affordability, abundance, and is significantly more eco-friendly than other fossil fuels, such as coal.

Alternatively, Europe could look to make up its energy shortfall by importing US liquefied natural gas (LNG), though, as Dr. Blex explained, this course of action is riddled with drawbacks and is not in Germany’s interests.

“The position of the AfD is that Germany should make an interest-based policy and due to the current economic climate and the German government’s recent policies, we must focus on importing. As Russia currently supplies the cheapest option in the form of natural gas, it is only logical that we import from them,” Dr. Blex told Sputnik on Friday.

“Since the US cannot currently compete in terms of both price and infrastructure, the idea of seriously switching to US gas is a pipe dreams. In addition, the AfD refuses to support the US gas industry at the expense of Germany, or to solely serve Washington’s geostrategic interests.”

Dr. Blex expressed his support for Nord Stream II, insisting that it will benefit Germany and the wider European economy, dismissing concerns that Moscow could use Europe’s reliance on Russian natural gas as leverage over the continent.

“Despite all the prophecies of doubts about the danger of a Russian monopoly position and the associated blackmail potential, as well as its alleged political uncertainty as a partner, Russia has always reliably adhered to its supply contracts with Germany over the past 30 years, which is why we regard Russia to be a reliable partner. As long as this remains so, I see no need to orient ourselves elsewhere,” Dr. Blex said.

In fact, this is more likely to be an issue if Europe swapped out Russian natural gas for US LNG, as the Trump administration has repeatedly showed itself to be an unreliable partner, with President Trump withdrawing from the Iran nuclear deal and recklessly imposing tariffs against several key US trade partners in 2018.

In virtually every case of opposition to Nord Stream II, the critic has a vested interest in preventing the pipeline’s completion; Russian natural gas is perhaps the single largest barrier to US LNG taking over Europe’s energy market, while some European states are keen to hinder the project to ensure their revenue streams from existing Russian gas transit deals aren’t slashed.

Although Europe maintains a fruitful partnership with Russia in the energy sector, sanctions and the contemporary political climate have inhibited both sides from exploring new avenues and benefiting from the untapped economic potential an amicable relationship offers.

Dr. Blex noted this “tremendous potential,” and voiced concerns of German and other European businesses being adversely affected by the sanctions, saying, “It is undisputed that trade between the European Union and Russia has tremendous potential. German companies in the automotive, chemical and electronic industries suffered losses due to sanctions. Normalization of relations is therefore of Russian as well as European and German interest.”

EU farmers have often protested against the sanctions, dumping their produce on the streets, as they’ve been hit hard by the sanctions.

“The AfD advocates ending the sanctions,” the German MP added.

Moreover, the Bundestag member called for a “pan-European policy” that fosters better political and economic relations with Russia, but said the current German federal government is unlikely to adopt such an approach.

“A pan-European policy that strengthens economic relations with Russia would be desirable. Unfortunately, the political will for this geostrategic reasoning does not yet exist; the Merkel government is against it.”

However, Dr. Blex described himself as optimistic “that the steady increase in power of the AfD” will shift Germany’s stance and lead to a more productive relationship with Russia.

“I therefore hope that in the long term, throughout the EU, there will be a recognition that Russia must be seen as a partner rather than an enemy,” Dr. Blex concluded.