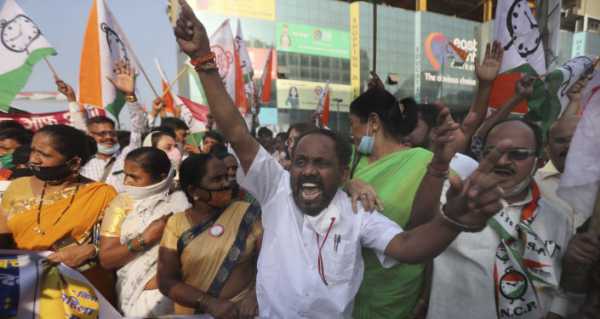 Disha Ravi was arrested on Sunday by Delhi Police in connection with a tweet by Swedish climate activist Greta Thunberg, who shared a “toolkit” designed to aide the ongoing farmers’ protests in India.

The arrest of young climate activist Disha Ravi in the Indian city of Bengaluru has sent Twitter into a frenzy, with more than a million people tweeting the hashtag #IndiaBeingSilenced.

Users are demanding her release as India’s farmers’ protests on the outskirts of Delhi continue to attract international attention.

#IndiaBeingSilenced is getting an huge response on social media.

Ravi’s arrest came days after Swedish environmental activist Greta Thunberg offered her support to the farmers by sharing a protest “toolkit,” much to the ire of Delhi Police who have registered a case against Thunberg for “criminal conspiracy.”

The authorities claim Ravi is also responsible for preparing and sharing the toolkit on social media.

“She was one of the editors of the toolkit Google Doc and a key conspirator in the document’s formulation and dissemination,” Delhi Police said in a statement.

Ravi is a founding member of the Indian branch of Fridays For Future, a climate campaign first launched by Thunberg.

The Indian activist’s arrest has sparked a strong reaction from fellow activists and netizens alike.

Students held a peaceful protest in Bengaluru city in India’s Karnataka state and presented saplings to the police while urging Ravi’s release.

India’s Coalition for Environmental Justice has described Ravi’s arrest as an “extra-judicial abduction.”

The arrest has also triggered international condemnation of the Delhi Police.

Meena Harris, the niece of US Vice-President Kamala Harris, has also tweeted in support of Ravi, so too UK Member of Parliament for Leicester East Claudia Webbe.

Farmers from across India have been protesting since late November on Delhi’s borders demanding that a trio of recently introduced agricultural laws be repealed.