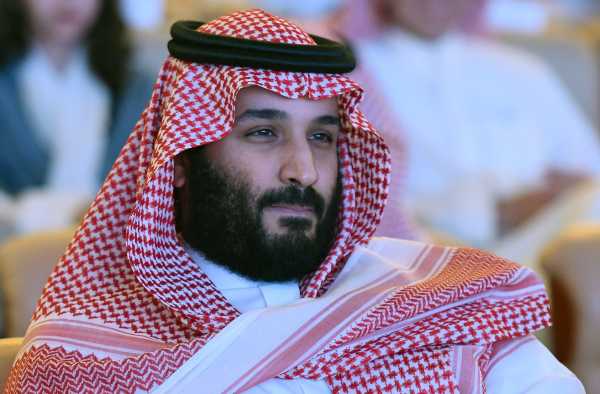 Saudi Arabia and Canada are fighting a nasty war of words on Twitter that has now escalated into a full-on diplomatic crisis.

In the past two days, Saudi Arabia has declared the Canadian ambassador “persona non grata” and given him 24 hours to leave the country. The Saudis have also called their ambassador back from Canada, suspended “all new businesses transactions and investments linked with Canada,” and cancelled direct flights to Toronto by Saudi’s state airline.

On the surface, the fight is about the recent arrest of several prominent human rights activists in Saudi Arabia, including some with ties to Canada.

But at its core, the fight is about the brave — and terrifying — new world being ushered in by the kingdom’s young new crown prince, Mohammed bin Salman.

It offers a disturbing glimpse into how MBS, as he is commonly known, is perpetuating the country’s horrific human rights record — and disproves the glowing headlines in the West proclaiming him to be the Middle East’s newest liberal savior.

“They have both been repeatedly targeted, harassed, and placed under travel bans for their human rights activism,” Amnesty said in a statement Wednesday. “It appears that Samar Badawi and Nassima al-Sada are once again being persecuted for their previous human rights work, and, if so, they should be immediately and unconditionally released,” the statement added.

Badawi, an internationally acclaimed activist in her own right, is the sister of Raif Badawi, a Saudi dissident blogger who has been imprisoned by the Saudi government since 2012 on charges of apostasy and “insulting Islam through electronic channels.” He’s also been subjected to brutal public flogging.

Raif Badawi’s wife, Ensaf Haidar, and their three children have been living in Quebec, Canada, since 2015, where they fled to escape further persecution. On Canada Day (July 1) 2018, Haidar and the children became Canadian citizens.

On Thursday, Canada’s foreign minister, Chrystia Freeland, tweeted that she was “Very alarmed to learn that Samar Badawi, Raif Badawi’s sister, has been imprisoned in Saudi Arabia,” adding that “Canada stands together with the Badawi family in this difficult time, and we continue to strongly call for the release of both Raif and Samar Badawi.”

The next day, Canada’s foreign ministry published a tweet calling on Saudi Arabia to “immediately release” Samar Badawi as well as “all other peaceful #humanrights activists.”

That tweet seems to have royally pissed off the Saudi government.

In a series of angry tweets on Sunday, the Saudi foreign ministry slammed Canada’s “negative and surprising attitude” and called Canada’s position “an overt and blatant interference in the internal affairs of the Kingdom of #SaudiArabia.” (The Kingdom of Saudi Arabia, or KSA, is the country’s formal name.)

The foreign ministry also announced in the Twitter thread that it was kicking the Canadian ambassador out of the country and suspending “all new trade and investment transactions” between Saudi Arabia and Canada.

In an email to the Canadian press Sunday night, a spokesperson for Freeland responded to the Saudi threats. “We are seriously concerned by these media reports and are seeking greater clarity on the recent statement from the Kingdom of Saudi Arabia,” said Marie-Pier Baril.

“Canada will always stand up for the protection of human rights, very much including women’s rights, and freedom of expression around the world,” she continued, adding, “Our government will never hesitate to promote these values and believes that this dialogue is critical to international diplomacy.”

Then things got even darker.

Early Monday morning, a pro-government Saudi Twitter account, @Infographic_ksa, tweeted a photo of a Canadian airliner flying directly toward the Toronto skyline with this message: “As the Arabic saying goes: ‘He who interferes with what doesn’t concern him finds what doesn’t please him.’”

The photo was eerily reminiscent of the scenes of jetliners slamming into the World Trade Center in New York on September 11, 2001. Fifteen of the 19 hijackers on 9/11 were citizens of Saudi Arabia.

The tweet was deleted shortly after, and a modified image without the plane was posted instead. A while later, @Infographic_ksa — a “verified” Twitter account closely associated with the Saudi government — tweeted out an apology, stating, “The aircraft was intended to symbolize the return of the Ambassador”: 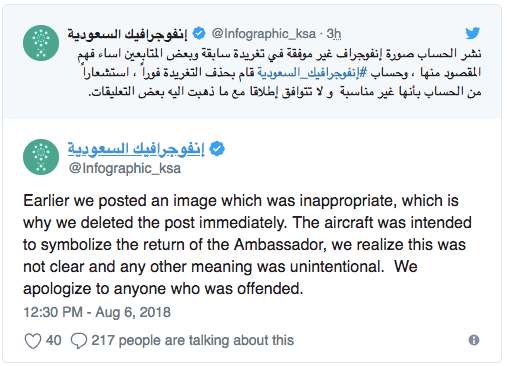 Just a few hours later, the Saudi Ministry of Media announced it had ordered the owner of @Infographic_ksa to shut down the Twitter account “until investigations are completed, according to electronic broadcasting laws in KSA.”

But while the vague threat of another 9/11 may have been accidental and not sanctioned by the Saudi government directly, the message coming out of Saudi Arabia over the past several days has been clear: Don’t fuck with us, Canada.

Crown Prince Mohammad bin Salman is not messing around

The arrests of Badawi and others that Canada was objecting to are part of a wider government crackdown on human rights, ordered by Mohammed bin Salman, the 32-year-old crown prince who ascended to the position of next in line for the throne just a little over a year ago.

MBS has been hailed in the West as an “ambitious, energetic” young “reformer” who is upending the kingdom’s conservative ways and ushering in a bold new era of modernization, complete with sweeping liberal social and economic policies.

But while MBS has initiated some modest reforms, including relaxing longstanding restrictions on women driving and allowing movie theaters to open across the country, he has also ruthlessly consolidated his power and cracked down on dissent. One way he’s done this is by arresting many of the activists who championed the reforms he himself pushed through.

As the Guardian notes, “Badawi, a recipient of the International Women of Courage award, was a prominent figure in the call to end the driving ban for women, a landmark reform passed in June and credited to Saudi prince Mohammed bin Salman.”

And in November, under the guise of an anti-corruption campaign, MBS rounded up hundreds of influential businessmen — including many members of the royal family — imprisoning them in the Ritz-Carlton hotel in Riyadh and seizing millions of dollars in assets.

On the international stage, MBS has overseen an impulsive and utterly disastrous war in Yemen, spearheaded a diplomatic blockade of the tiny Gulf country of Qatar, and cultivated close ties with the Trump administration.

It is in this context that Bessma Momani, a Middle East expert at the University of Waterloo in Canada, says this latest fight between Saudi Arabia and Canada should be interpreted. “[T]his is less about Canadian foreign policy than it is about the Saudis,” Momani writes in the Globe and Mail newspaper. She continues:

So while this diplomatic fight may have technically started over a tweet, it has a lot more to do with one man’s unbridled power and ambition. And that man just so happens to be next in line to rule Saudi Arabia.

The controversy behind a star Google AI researcher’s departure