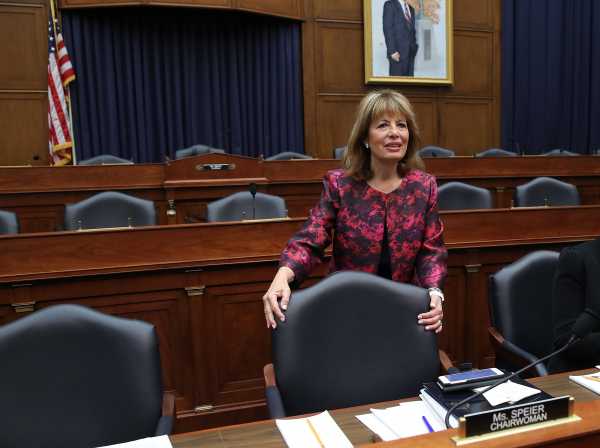 About 100 female lawmakers from across the world have sent a letter to Facebook CEO Mark Zuckerberg and COO Sheryl Sandberg demanding that the company do a better job combating misogyny on its platform, especially hateful content directed at female public figures.

The letter, which was signed by prominent US politicians including House Speaker Nancy Pelosi, Sen. Tammy Baldwin, and Reps. Jackie Speier, Alexandria Ocasio-Cortez, and Ilhan Omar, comes as Facebook faces widespread criticism from civil rights groups and politicians over its handling of hateful content and misinformation.

“[M]uch of the most hateful content directed at women on Facebook is amplified by your algorithms which reward extreme and dangerous points of view with greater reach and visibility creating a fertile breeding ground for bias to grow,” the lawmakers write in the letter, which was announced at a forum about misogyny and social media at George Washington University on August 6.

The letter comes just days after Facebook opted not to take down a fake, viral video of Pelosi being shared on its platform that makes her seem drunk. This is the second time in just over a year that Facebook has left up one of these so-called “shallow-fakes” about Pelosi. While some other platforms removed both Pelosi videos, Facebook only added a fact-checkers’ label to the video and reduced its distribution.

Rep. Jackie Speier from California’s 14th District is a co-chair of the Democratic Women’s Caucus and the primary organizer of the letter. She told Recode in an interview on Thursday that the recent Pelosi fake proves that Facebook isn’t doing enough to tackle sexism that spreads on its network. In particular, she emphasizes that Facebook’s systems magnify the hateful content, harassment, and misinformation targeted at female public figures. That’s why she wants Facebook to conduct an internal audit of misogyny on its platform.

The following has been lightly edited for clarity and length.

Earlier this week, we saw Facebook fact-checkers label — but choose to not take down — a fake video of Speaker Nancy Pelosi that made her seem intoxicated. Meanwhile, several of Facebook’s peer social media platforms did take that video down. I’m curious what you think of Facebook’s approach here, especially given that this is the second video like this that we’ve seen made about Speaker Pelosi.

So it’s deeply troubling on a number of levels. … 2.6 million people saw it on Facebook and Facebook’s response is that “it is partially false.” It’s not partially false — it’s completely false.

And Facebook is in my district. It’s a company that has added great value and great jobs for so many of my constituents. One of the statements they make in their mission is that they promote diversity and they promote equality. There is no question: Many studies have already established that women on these platforms are maligned in much greater instances than men, that they actually give license to persons that engage in misogynistic and hate speech, and do so with impunity because they are anonymous.

And the algorithms that Facebook uses enhance and amplify issues and statements that create controversy. So — of course — it ends up amplifying misogynistic statements, [and] doctored videotape of the speaker to make her look like she was drunk. … We can take the slings and arrows. All of us have pretty tough skin. You gotta have tough skin to be in this business, but you do not have to be the subject of constant, persistent misogyny.

There have been so many threats on my life over the length of my service. Two in the last two years actually were taken up by the local district attorney, and individuals were convicted. So there has been an increase of this kind of vile behavior, and it’s got to stop. And we’re putting Facebook on notice that they’ve got to be part of bringing some normalcy back to this process and to espouse their mission about diversity and inclusion and empowerment.

In the letter, you use the term “gendered disinformation.” I’m curious what you mean by that. Could describe what’s going on?

It’s not just run-of-the-mill harassment online. It seeks to spread deceptive and inaccurate information and images about women, and particularly to follow storylines that draw on misogyny and distrust of women’s leadership.

“Self-policing isn’t working,” and Congress has a role in regulation

This comes after a civil rights audit that Facebook essentially failed and an advertiser boycott of Facebook that civil rights groups organized. A lot of people are very upset with how Facebook is handling content on its platform. As a member of Congress, when or if do you think it’s Congress’s role to step in and legislate in this area?

For the longest time, I think Congress has allowed the internet to be the wild, wild West, and we wanted to take this embryonic platform and allow it to grow — and e-commerce as well. I think we recognize now that it needs to be regulated. And in many respects, these platforms want to be regulated. The self-policing isn’t working, and it’s being enforced in a disparate manner.

At the recent antitrust hearing, some of your conservative colleagues seemed to take an opposite approach, saying that Facebook is censoring them too much and that Facebook is being too aggressive in moderating content. And I’m curious what you think of that argument.

I don’t think that argument holds any water. In some respects, I think they do that in order to encourage Facebook to be more conservative. … Hate speech is wrong anywhere and everywhere. So I don’t think there’s a question as to whether or not you should tolerate that. We don’t tolerate hateful graffiti to be placed on buildings, on churches … you know, it’s a form of verbal graffiti.

You call out algorithms specifically, but there’s horrifying sexist content online because there are real people who are willing to post this content. What does it mean for Facebook to change the algorithm, when often it’s real people posting this in the first place?

Let me tell you how bad it is. I don’t read my Facebook posts, I do not read my Twitter comments, in part because it distracts me from doing my job. I mean, when someone writes on Facebook, and they don’t like something I’ve posted, and they say, “they should have finished you off in Jonestown.” Or when, recently, they called me a “post-menopausal cunt.”

That is venomous. … If they were doing that in person, they wouldn’t get away with it.

I think they need to do much more. I think they need to do an internal audit of misogynistic comments on Facebook pages. And I hope that they will join in meeting with the Democratic Women’s Caucus and explore this further. … But, you know, it’s very consistent with their attitude, which is, “we’re just a platform, we’re just here to give people the public forum.” They’re much more than a platform.

It seems like this question of misogyny and sexism on Facebook touches on a lot of issues that Facebook is dealing with right now, like misinformation and content moderation. I want to close by asking whether you think this is a platform that’s prepared for the upcoming November election.

No, I don’t think it is. As soon as Vice President Biden announces his vice presidential pick, the onslaught on Facebook and other sites is going to be horrific. We can’t tolerate misogyny, just like we can’t tolerate racism. … What I’m most concerned about is the effect that this kind of content will have on women who contemplate running for office and who are dissuaded from running because they don’t want their names just besmirched like this [or] their families impacted.

And we do have to recognize that there’s a kind of a format that’s used. Most of these comments about women in politics are that we are either dumb or we are too emotional. They’re the same kinds of assessments of women when we wanted to get the vote, for goodness’ sake.