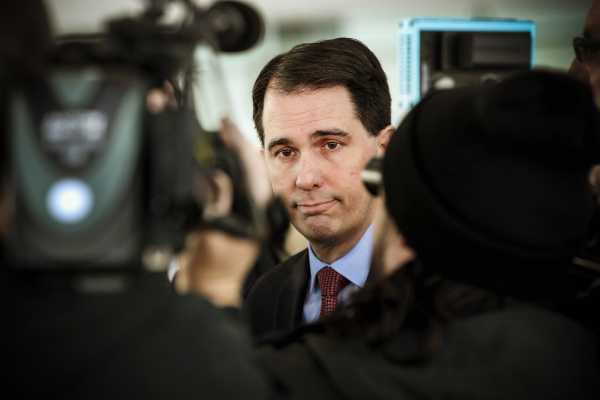 Democrats still don’t have a clear star candidate in the Wisconsin governor’s race.

Wisconsin Republicans like to say Gov. Scott Walker is unbeatable. The 2018 midterm elections will be the biggest test yet of that theory.

If Walker wins reelection in November, it will be the fourth time the state has elected him to the governor’s mansion — and he’s only running for his third term. Walker, who was first elected in 2010, is probably best known for being a conservative union buster, stripping public employee unions of their collective bargaining rights in 2011. The fallout was enough for Democrats to force a recall election the next year.

But Walker won anyway. Two years later, he went on to win reelection for a second term. Now he wants a third. It’s a history that’s made Walker one of the Democratic Party’s biggest white whales anywhere in the country.

Now in 2018, with another chance to take Walker down, Democrats don’t have a clear star within their ranks to mount the challenge. 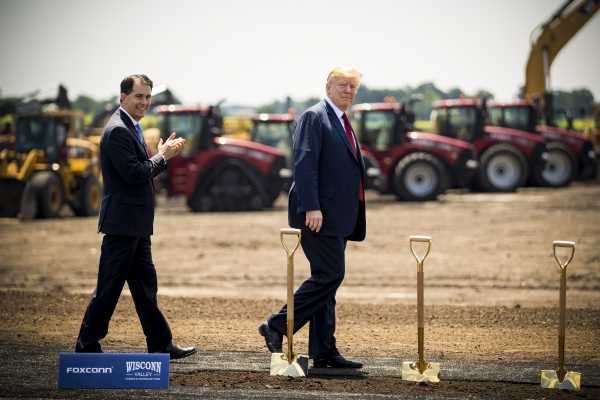 More than eight Democrats have filed to run in Wisconsin’s gubernatorial primary, which will be held August 14. Democrat Tony Evers, the state’s public education chief, is in the lead, but polling has been scarce and other candidates have pulled in notable Democratic endorsements. Mahlon Mitchell, the president of the Professional Fire Fighters Association, has the support of California Sen. Kamala Harris. Kelda Helen Roys, a former state Assembly member, has the backing of New York Sen. Kirsten Gillibrand (and Wisconsin’s most famed indie band, Bon Iver).

Whoever wins the primary will have to face not only an incumbent Republican but also the impressive party machine Wisconsin Republicans have built around Walker in the better part of a decade that they’ve run the state.

Walker could still be in trouble in this historically purple state. In February, a Morning Consult poll found Walker among the 10 least popular governors in the country. A Marquette University poll in June had Walker only up 4 points ahead of Evers. And a recent NBC News/Marist College survey put Evers ahead of Walker with a 13-point lead — 54 versus 41 percent — a position Walker never faced in either of his past two elections.

If Democrats can rally around their candidate in the final months of this election, and energize an already eager voter base, 2018 might finally be the year Democrats actually beat Scott Walker.

Democrats are getting their third chance to unseat Walker. But this year is notably different than past elections, when there was a party-picked candidate who went through the primary almost as a formality.

“There is clearly no coronation going on — it’s a bit more of a free-for-all,” Barry Burden, director of the University of Wisconsin’s Elections Research Center, said. “That reflects Democrat frustration. They have not been able to work in advance.”

In a field of eight major Democrats candidates running for governor, all of the candidates have a name recognition problem. 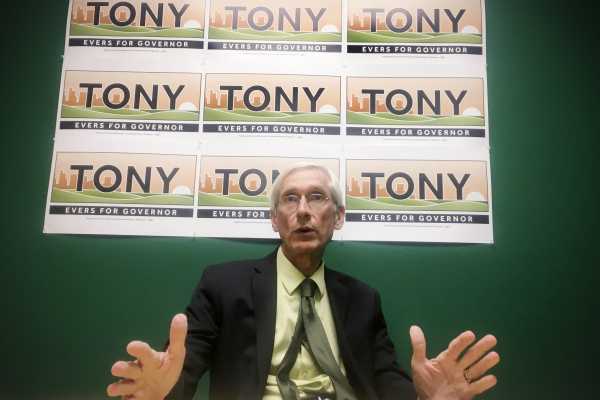 Within the group, Tony Evers, Wisconsin’s superintendent of public instruction — a position he has held since 2009 and was most recently reelected to in 2017 — is the most familiar face. Still, 61 percent of voters hadn’t heard enough about Evers in a June Marquette poll to decide what to make of him. Evers has been running far ahead of the other Democrats in the polls, but he could still be beaten on Tuesday.

Two progressive groups, the Bernie Sanders-inspired progressive group Our Wisconsin Revolution and the Working Family Party, banded together with the intent to endorse a candidate. But they only managed to narrow the field to the top four — and Evers wasn’t on that list. Instead, it includes firefighter union chief Mahlon Mitchell, state Sen. Kathleen Vinehout (who has run in a Democratic gubernatorial primary before), political activist Mike McCabe, and former state Rep. Kelda Roys. None of these candidates has ever topped a poll or showed formidable fundraising prowess. Some of them have gained notable endorsements. Emily’s List, the group that promotes female candidates, backed Roys. But Democratic campaign operatives in the state noted the group didn’t put many resources behind her to raise her profile. 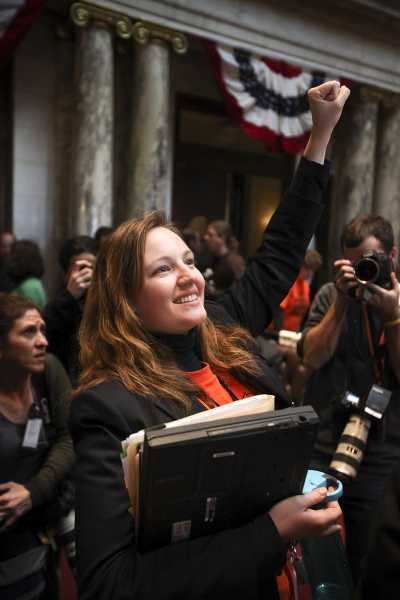 All the candidates are essentially running on the same platform. They all oppose Walker’s $10 billion Foxconn Technology Group project, which has earned President Donald Trump’s support, and they oppose Walker’s union-busting measure that restricted public employee’s bargaining rights. They all differ slightly on how they would address higher education tuition fees — some arguing to keep current freezes, others claiming they’d cut tuition fees and increase state funding. They all want to either phase out, limit, or end school voucher programs, and are considering ways to boost infrastructure investments — like new tolls or a gas tax.

Even in such a big primary field, the candidates have stayed away from negative mudslinging against their own. Instead, they’ve attacked Walker and tried to differentiate themselves on policy. The result: Going into primary day, most voters don’t know who the Democratic candidates are.

“The question is whether the party will be able to come together behind their candidate,” Burden, the elections researcher, said.

Walker has been campaigning hard to soften his image

As Democrats look for a challenger, Walker has had the airwaves to himself for the year. And he’s had a lot of work to do to fix his image ahead of the election.

Walker was once seen as the future of the Republican Party, the seemingly invincible conservative leader of a Midwestern state. But his foray into national politics was an incredible dud; his 2016 presidential campaign burned through its scant fundraising cash early, and Walker dropped out of the running in September 2015 with his operation nearly broke. His popularity in the state tanked, something that highlighted several of his vulnerabilities.

The governor is not particularly charismatic, yet he is a relentless campaigner. He’s had an aggressive campaign schedule visiting factories and schools across the state.

Wisconsin Republican strategist Brandon Scholz told me the governor’s strategy so far has been to “load in” economic messages in the lead-up to his election. But there are still several policy areas Democrats are likely to attack. “I think transportation can be one of those gnawing things that can turn a scratch into a cut. But it’s not just Walker — it’s the legislature,” Scholz said.

Education, transportation, health care, and economic investments will be among the biggest policy issues Wisconsin Democrats are sure to hit Walker on. 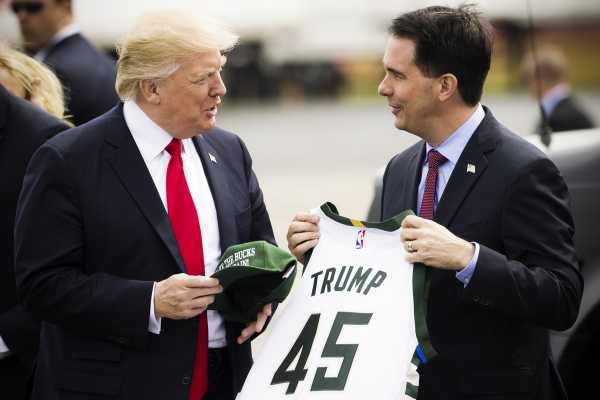 The unemployment rate in Wisconsin sits at a low 2.9 percent, but Democrats point out that wages haven’t kept up with the rate of inflation in lower-income sectors of the job market. Walker’s deal to give a Chinese company Foxconn Technology Group $3 billion in tax breaks in exchange for their $10 billion factory has come under major attack after Wisconsin’s Legislative Fiscal Bureau reported that the state wouldn’t break even on the investment until 2043 — and possibly not even then.

While Walker likes to say he has spent more on education and transportation than his Democratic predecessor, those claims are mostly false; Walker’s numbers don’t count the rate of inflation and double-count investments made in transportation.

Likely in anticipation of a run against Evers, Walker has been emphasizing public education on the campaign trail, releasing ads on the issue and prioritizing school photo ops. But the anti-collective bargaining law he signed has had a lasting impact on public school teachers, and the governor has been accused of underfunding public schools. If Democrats nominate Evers, education is guaranteed to be a major issue in the governor’s race.

“It’s clear he knows what his weaknesses are, trying to run these glossy positive ads with female public school teachers,” one Democratic campaign operative said. “He’s trying to rewrite history with these TV ads.”

Walker’s approval numbers in the state have largely stabilized since his presidential run. But he still doesn’t hold a comfortable lead ahead of Evers in the early polling, which should be a point of concern for the two-term governor.

“Walker is a terrific candidate; he is a good messenger,” Burden said. “But he has always benefited from having a tailwind. 2018 will be the first time that Republicans will be facing an election with a Republican president.”

This election will be a real test of the Democratic Party

Walker has said outright that he’s worried about the potential for a “blue wave” in the 2018 midterms.

In Wisconsin, hints of a Democratic landslide have already appeared in state special elections, in which Democrats picked up two previously Republican-held state seats. In January, Democrats flipped a rural Trump +17 state Senate district with a comfortable 10-point margin of victory — a loss Walker called “a wake-up call for Republicans in Wisconsin.” Liberals also won a seat on the Wisconsin Supreme Court by a huge margin in April.

Walker has some clear advantages in the state. The Wisconsin Democratic Party has gone through years of devastating losses; Republicans control the state legislature, one of the state’s US Senate seats, five of its eight congressional seats, and the governor’s mansion. In 2016, President Donald Trump became the first Republican presidential candidate to win the state since 1984, beating Hillary Clinton by fewer than 30,000 votes.

Democrats concede that Walker will undoubtedly out-fundraise them in the governor’s campaign. But the party is trying to set up their candidate for success; the Democratic Governors Association has already committed $4 million in air time to whoever wins the Democratic primary, and the state party is building a ground game.

The midterms will be the ultimate test for Democrats in the state. If they are able to successfully energize their base, highlight Walker’s controversial record in the state, and tie him to Trump, 2018 might be the year he falls. 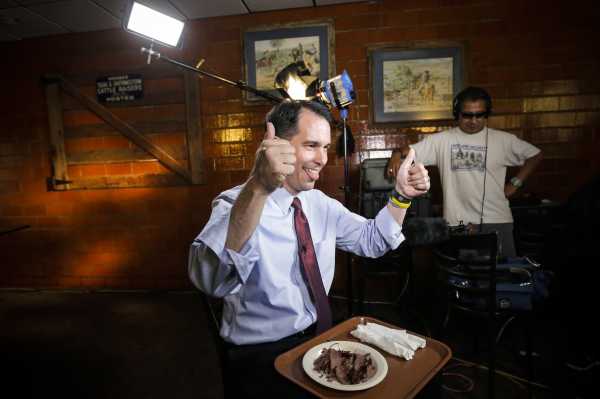